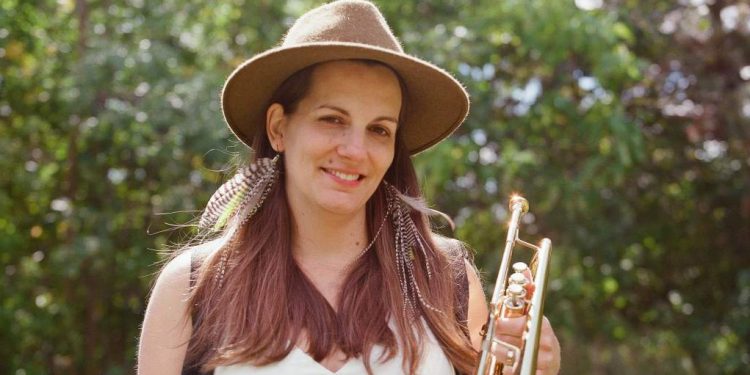 When an opportunity to bend your brand comes along, to challenge and broaden the parameters of your previous musical perimeter, few musicians can resist.

Toronto’s Rebecca Hennessy is no stranger to broken boundaries. As the bandleader and trumpeter for 2019’s Women’s Blues Revue at Koerner Hall, the improvisational duet partner for pianist Tania Gill at last year’s Women From Space Festival, the and folk/world explorer performing and composing with the chordless Way North jazz quartet, an extensive excursion into lyrical song-crafting has serendipitously coincided with an accrual of precipitous life events.

Today, Rebecca and her life partner/collaborator, bassist Michael Herring, himself a significant beacon in Canadian jazz, release a gentle but highly energized collection of new, original songs, All The Little Things You Do, just days before the anticipated birth of their first child.

“We actually started well before the pandemic started. The band was originally called Makeshift Island,” Rebecca revealed, “with a residency at the Tranzac that we had since 2013. But when Kevin Breit joined the band, I started moving into more singer-songwriter tunes, taking rather more of a vocal approach than an instrumental approach. So a few years ago we went into the studio with these songs that I co-wrote, some with Michael, some with Dave Clark and Julie Hambleton, Fergus’s niece.”

‘A culmination of different projects’

In our insecure era of medical and political malevolence, innovations can potentially scramble connections with an already social-media-distanced fan following. But Rebecca doesn’t feel as if she is leaping into a square-one situation.

“As a detective on my own case, looking at all the refining and figuring out that Michael and I have done together over many years, it’s no surprise that this comes as a culmination of all those different projects, but it may be a surprise from an outsider point of view, by people who have only heard my instrumental music.”

The title track is a uniquely-formatted introductory piece, boldly shifting gears between the harmony duet chanting of the title and a full-throated brass ensemble, ornamented by Alex Samaras’s atmospheric birdsong commentary.

“I think there’s a lot of jazz still in there,” Michael noted. “Jazz is a big umbrella. And I may be less of a muse than some people think, but I have been told that that song was written for me, so it’s exciting to be a part of it, as a bass player, a songwriter and as co-producer.”

“Every song on the record is definitely experiential and it’s sort of a documentation of what I’ve been experiencing over the last couple years.” Rebecca confided. “There are a lot of feelings about loss and love and mental health as well.”

In the absence of the usual professional exigencies of rehearsals and performances, the duo has been able to focus the available energies of several formidable talents, not the least of which is the protean Kevin Breit, who brings his arsenal of sci-fi guitar pedals, his vast musical vocabulary and the sweet aural enchantment of melodic romance to the whole record. The rousing “Dr. Good” features his furious syncopations on banjo, and he also enlists his fabled Upper York Mandolin Orchestra in the service of the title tune and “Deeper Than The Dark Blue Sea,” where he enhances his solo with a zesty twist of the Sailor’s Hornpipe.

“We’re ALL fans of Kevin,” asserted Rebecca. ”He’s an incredible voice in the community, and it’s a celebration to work with such a masterful artist, and somebody who’s so warm and will bring so much to your project, if you’re lucky enough to work with him.”

One of Toronto’s deep wellsprings of majestic strings, Drew Jurecka, scores new prismatic pathways on violin and viola through a couple of pieces, and the divine sensibilities of David Travers-Smith’s ears collate all of the elements of the music into a pearly effervescence.

“He brings such a sense of clarity with him,” Rebecca beamed, “and his expertise at bringing the music into certain spaces. All these records that I loved and was inspired by were produced and mixed and mastered by him at his found.sound studio. We’ve just recorded a new record, for me, in our home studio, and we’ll be sending that off to David shortly too, before the baby comes. We’ve been very creative lately.”

To coincide with the album’s release, Michael and Rebecca have persuaded an animator friend whose work they both admire, Brooklyn’s Andrew Benincasa, to direct a video to accompany an elegiac selection from the record, “It’s A Beautiful Day To Say Goodbye.” It is full of classic, silhouetted imagery reminiscent of films by Lotte Reiniger and Carolyn Leaf.

“I’m very proud of it and the way it worked out. That’s a tribute to my mum, who passed away a year and a half ago. A lot of Andrew’s work deals with grief, and dealing with grief, and love, and he was immediately moved by the song. It’s pretty exciting, and it’s a sort of a way to connect my music to a wider audience.”

So, between birth and death, isolation and outreach, do take notice of All The Little Things You Do, music that heals and swings in the flux of all those other little things.