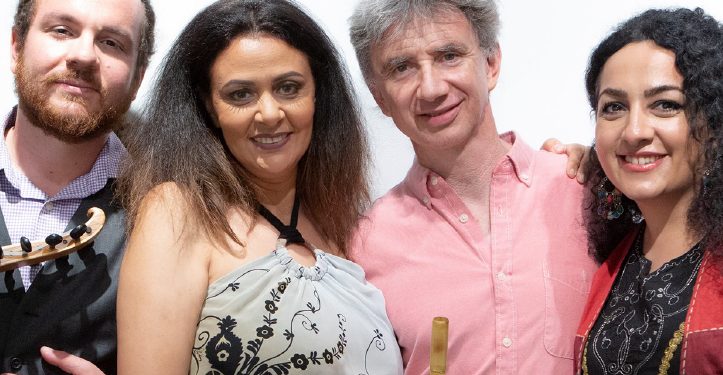 The song is from the ensemble’s upcoming album, African Routes, due Nov. 27.

It is the result of a collaboration that happened between lyricist Tarek Ghaleb, Maryem Tollar, Debashis Sinha and Colin Couch. Propelled by an urgent vocal and the insistent, intricate 12/8 rhythmic pattern of the dumbek, it’s an original song that tells the story of a sudden, brief storm across the land. The lyrics describe a beautiful sunny day, but in the distance, the clouds are dark. All of a sudden, day turns into night and a violent rain storm hits. Then just as quickly as it comes, it passes, and the sun comes out again.

The beautiful, original and colourful visuals created by Omneya Tollar for the video accompany the rhythm expertly and enhance the tribal vocal improvisations by guest artist Waleed Abdulhamid. Audio was recorded by Reza Moghaddas at Small World Music Centre and edited, mixed and mastered by Jono Grant at Victory Drive Recording.

The ensemble is comprised of some of the most accomplished world music artists in Canada.

Egyptian-Canadian Maryem Tollar on vocals, riqq (Arabic tambourine) and qanun (Arabic table harp), is a renowned singer, known for her world music performances with Jesse Cook’s ensemble, with the Juno-nominated Maza Meze, and with acts such as Doula, Mernie and Turkwaz. Her voice has been heard on the theme of CBC’s Little Mosque on the Prairie and A.R. Rahman’s Bollywood hit “Mayya Mayya.” She was the featured vocalist in Tafelmusik’s production of multi-media performances of “Tales of Two Cities: The Leipzig-Damascus Coffee Houses” and the narrator and vocalist in “Safe Haven.” She performed Christos Hatzis’ piece “Syn-Phonia – Migration Patterns” with the Winnipeg Symphony Orchestra and Inuit throat singer Tiffany Ayalik; and his multi-media piece “Constantinople” with The Gryphon Trio and Patricia O’Callaghan. Last year, Maryem was nominated for the inaugural 2019 Johanna Metcalf Prize for Performing Arts.

Canadian Ernie Tollar, on wind instruments, is an internationally renowned musician and composer who has been contributing to the Toronto jazz and world music scene since 1980. He has performed in major jazz and folk festivals in Europe, India, Egypt, the US and Canada. He can be heard with several Toronto groups, including Near East Trio (Indian/Arabic/Jazz); Moneka Arabic Jazz (North African/Arabic/Jazz); and Armenian Jazz led by Levon Ichkhanian. Ernie has appeared on more than 100 albums and performed with Holly Cole, Hugh Marsh, Don Thompson, NOJO, and George Sawa among many others. He’s also performed with Maryem in Mernie and the Juno-nominated Maza Meze.

Greek-Canadian Demetri Petsalakis, on oud (Arabic fretless lute), is a Toronto-based musician performing in a variety of styles with a focus on Greek and Middle Eastern lutes. He has performed with the New Canadian Global Music Orchestra, Tafelmusik, Ventanas, Near East, Nomadica, Zephyr, Turkwaz, Lenka Lichtenberg and Fray, Odessa Havana, and the Blue Dot, playing a variety of stringed instruments including oud, guitar and lyra. Demetri has a Master’s of Music degree in jazz guitar performance from the University of Toronto and a Bachelor of Fine Arts degree in music from York University.

Iranian-Canadian Naghmeh Farahmand, on Middle Eastern percussion, has performed in many well-known Iranian traditional bands in Iran and at festivals around the world in places such as Germany, Switzerland, Japan (Min On Festival), France (La fête de Musique), Italy, Kuwait (Women’s festival), Austria and England. She was honoured to perform with Hassan Nahid, Iranian master of the ney, and Hengameh Akhavan, a famous singer of traditional music. In 2010, Naghmeh moved to Canada and started work in world music and in Arabic, Bulgarian, Turkish, Indian and jazz music. She has been teaching in various music institutes for 15 years and has taught master classes and workshops around the world.