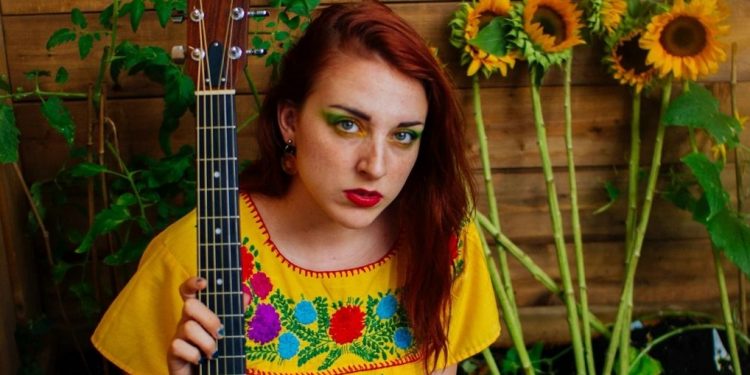 “I wrote ‘Sunflower’ a couple of years after one of my friends, Scott, took his own life,” she said of the album’s title song. “I couldn’t put anything on the page that was directly about him… It was too much.

“Instead,” she continued, “I took something I love — sunflowers — and used it as a symbol.”

Filled with catchy hooks, snaps, and claps, the song sees Holly embracing the opportunity to write to her late friend.

“I wrote ‘Sunflower’ as what I wish I could have said before he passed, and the EP Sunflower became a reality after I continued to write songs like this, from my heart.”

Holly’s love for music was ingrained at an early age.

“I came to Toronto not knowing anyone, and working four part-time jobs, playing over 150 shows yearly and pursuing music full-time,” she recalled.

Since then, she’s taken the stage in more than 25 theatre productions, graduated from Toronto Film School, and released a series of singles since her 2018 breakthrough, including 2020’s “Winter Blues,” “Singer-Songwriter Heartthrob,” and “Set Me Free.”

With a passion and talent that spans across genres of jazz, blues, soul, folk, rock and alternative, Holly’s acoustic melodies swirl with her signature raspy, haunting and cause-for-pause vocals wrapped in lyrics rife with honesty and insight.

“I cover topics from love and loss to Tinder and Disney Channel stars,” she said, with a grin and a wink. “I use my acting background to play with comedy and seriousness all at once.

“Sunflower includes stories of all kinds, including more love and loss. ’Yellow Dress’ takes you on an emotional roller coaster about a closeted girl who develops feelings for a friend who’s straight, and ‘Fast Forward’ is a big-room ballad about wanting to get over someone who doesn’t like you back.

“‘Safe’ is my thank you to everyone who has supported me and made me feel comfortable enough to be myself around them.

“There’s even a song written from the perspective of my cat wanting food at three o’clock in the morning, though… It could pass as a love song if you didn’t know! That’s ‘Leo’s Song,’ and it has hidden cat purrs throughout it.

“Short and sweet ‘Sunflower’ showcases heart, with deepness and lightness, and a sense of humour below the surface,” Holly continued. “Looking back, I’ve released seven singles so far, but this album finally feels like ‘home.’