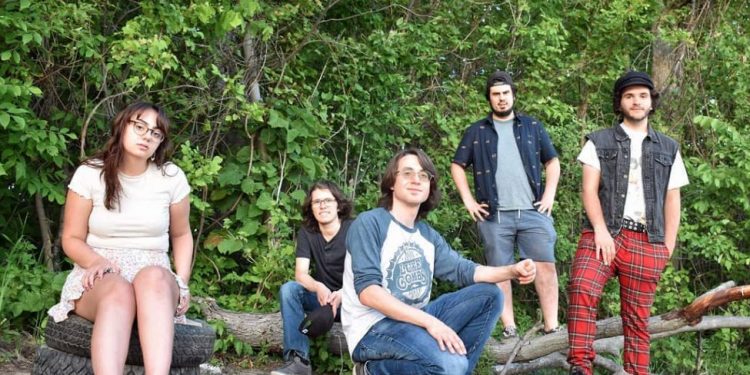 After debuting at #1 on Amazon Music’s “Country du moment” playlist, Canadian pop-country band the Record Breakers continue to soar beyond sonic norms with the release of their latest double-single – and first bilingual release – “In My Car / Dans mon char.”

On the surface, you have your standard checklist for the makings of a stellar contemporary band: two main vocalists, guitarists, and songwriters, Hayden Nolan and Bella Galasso, accompanied by knockout keys, bass, and drums from Michael Vallinakis, Devan Meisner, and Julian Galasso, respectively.

But dig a little deeper, and you discover that The Record Breakers are so much more.

First formed in 2014 for a Beatles-related celebration, the band began to explore and develop their identity as a bilingual five-piece with a knack for solid musical arrangements, memorable hooks, and larger-than-life harmonies.

“We had a special encounter with Blue Rodeo,” Bella recalled. “That inspired us to bring country into our pop sound.

“So, we’re a country band; we just sing about cars instead of trucks, you could say!”

The year 2016 saw the release of their self-titled debut EP, with a follow-up sophomore offering, Bigger Plans, landing in 2018. They opened for Bon Jovi that summer at the Montreal Bell Centre, something they described as an “opportunity of a lifetime,” they were crowned Discovery of the Year at Festival New Country Brome in 2019, and they were handpicked for CBC Searchlight’s Top 50 Producer Picks in 2020.

This year, they also created a song and collaborative video “Quarantine With You,” which Global News Montreal called “a viral success.”

“In My Car / Dans mon char” is available now.

Isabel & the Uncommons are readying a ...