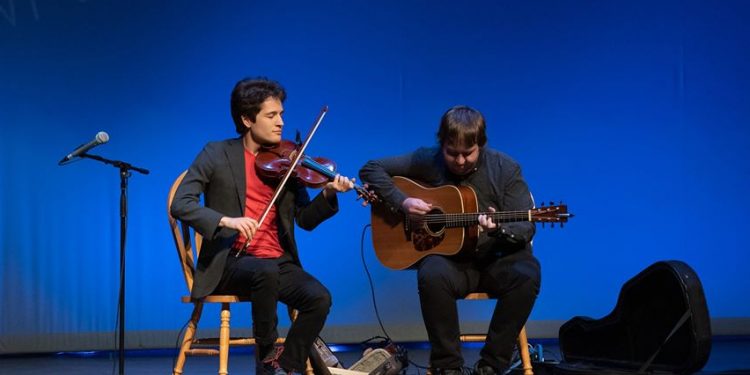 Alexis Chartrand and Nicolas Babineau have so much music in them that they pretty much had no choice but to produce a new CD hot on the heels of their 2017 tour de force, Gigues à 2 Faces.  This year’s effort by these two magnificent young musicians, Un Beau P’tit Son is a magnificent tribute to the fiddlers from whom they learned these melodies.

There is great reverence for these fiddlers in the Quebécois trad music scene: Yvon Mimeault, Lisa Orenstein, Joseph Larade, Erskine Morris, Martin Aucoin, Wilfred Guillette, Émile Benoît, and Louis Boudreault.  Most of the tunes on this album are named for those fiddlers, with the exception of “Reel du Moose,” which is an original composition from Nicolas and Alexis. Said Alexis, “We wanted to convey the importance of their efforts to create, preserve and perform their repertoire and also to contrast their individuality with ours.”

What makes this album stand out markedly from other recordings of the great tunes of Québec’s traditional music is the way they are arranged and played. Nicolas and Alexis have been fiddling their native province’s traditional tunes since they were kids, but as they have grown into adulthood, they have experimented more with arranging, coming up with completely new approaches to the music. There are crooked tunes with odd rhythms and timing, tunes that make you cry, tunes that fill you with joy. There are twin fiddles in unison, as well as tunes where Alexis shows off his singular virtuosity on the fiddle while Nicolas plays a superb accompaniment on guitar.  And we would be most remiss if we didn’t mention Mélissandre Tremblay-Bourassa’s lovely rhythmic gigue (stepdancing) on some of the tracks.

The final track on the CD features the voice of Émile Benoît, telling us about his tune (the previous cut on the CD). He described the melody as “un beau p’tit son,” a nice little sound. Said Alexis, “We decided to use these words as the title of the album because they conveyed the deep yet simple appreciation fiddlers have for their music.”

Most of the CD was recorded by Nicolas (he is also a sound engineer) in a room with great acoustics in Saranac, New York. Each track was recorded live until the musicians were satisfied with the performance. Recording each piece individually and live gives the whole recording an amazing sound, an immediacy that brings you even closer to these melodies, which are beloved in the Québecois oeuvre. I think this kind of treatment finely illuminates the importance of the sound of French Canada throughout the continent of North America.

Do yourself a favour: Get hold of this music and catch a live performance of these fine young musicians somewhere, somehow. They will blow you away.

I’m jealous that Toronto’s getting a ‘Be ...