Twelve questions of Christmas with Kerri Ough of the Good Lovelies 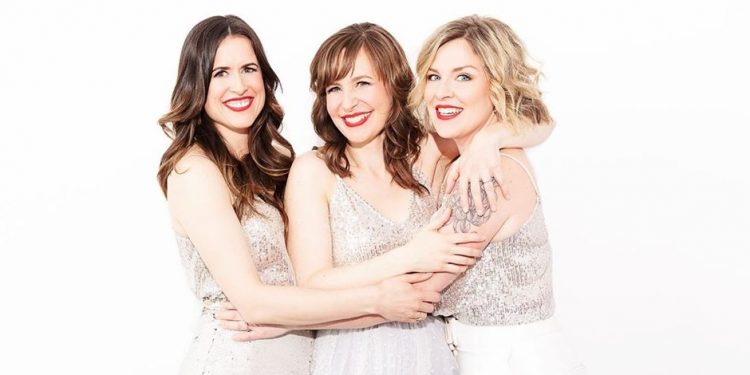 In early December, as snow fell outside our house and decorations went up inside, the Good Lovelies’ brand new album, Evergreen, played for the first time, its pure vocals and joyful sounds reminding me to take a breath as I tussled with tangled lights.  It is supposed to be a season of peace, joy and good will after all.  By the album’s end, the decorations were hung, and it felt like the season had officially begun.

Filled with renewed festive spirit, I reached out to the Good Lovelies to talk about the new album, their current Christmas tour, holiday traditions and more.  Here is Good Lovely Kerri Ough’s response to my “Twelve Questions of Christmas”:

Kerri: It really did, and there are a few reasons why. We worked with the same producer for both Christmas albums intentionally to pay homage to the first album, partly because we made the album in 2009 in May (a very hot May!), and this album in 2019 in June (a VERY hot June!) so those experiences were familiar.

RMC: This time around, how did you decide on which songs to include on the new album?

Kerri: For both albums, it was pretty easy to pick the material we wanted to record. A few of them are original songs, a few are well-known Christmas tunes, and then there are a few more obscure Christmas songs that we’ve dug up over the years and hadn’t until now recorded anywhere.

RMC: There are three original songs on Evergreen. Is the approach to writing different when it comes to original holiday songs?

Kerri: Not especially. Not in our experience. It’s like choosing to write about any life experience – you try to draw out the essence of what that experience – and in this case Christmas – means to you, and put that into song.

RMC: What makes for the perfect contemporary carol?

Kerri: I think, with all carols, a great melody, message and chorus make the perfect contemporary carol.

RMC: What is your personal favourite Christmas song or album?

Kerri: I’m particularly fond of Bob Dylan’s Christmas album, Christmas in the Heart. I love the album as is, but I also love the story behind it: that it was recorded live off the floor with a team of brilliant musicians – his backup singers being some of my favourites – and that all the royalties from the sales of this album benefited the charities Feeding America in the USA, Crisis in the UK, and the World Food Programme. This story just made me love it all the more. This record and the Charlie Brown Christmas album accompanied my tree decorating this year. One of my favourite Christmas songs is Ron Sexsmith’s “Maybe This Christmas.” He just captured something perfect in that song.

RMC: Growing up, was music/caroling a big part of your own families’ holiday traditions?

Kerri: Music was a big part of our family’s tradition, mostly because of the Christmas Eve church services we attended every year. My sisters and I would sing together, the church congregation would sing hymns together, and I loved it. At home, I would play Christmas music on the piano and sing Christmas songs with my mom. I was in a choir that held an annual Christmas concert, so that became part of our family tradition too. I have a lot of happy music memories surrounding Christmas time.

RMC:  Your annual Christmas concert tour has become part of the band’s holiday tradition, as well as a tradition for many of your fans and their families. That must be a great feeling?  For people that have never been to one of your Christmas concerts, what can they expect?

Kerri: Our band’s Christmas tour may be one of my longest standing traditions at this point! The show has really grown and changed over the years. We have a band of three gentlemen supporting us on bass, drums and piano in addition to all our instruments upstage from them. We play and sing our original wintery and Christmas songs, we tell stories from life on the road or life at home. It’s a pretty uplifting show. We love when the audience sings with us, and we love sharing our stories and getting people to laugh so they leave the show feeling lighter than when they arrived. We also sneak in a couple of non-Christmas moments to keep us rooted in what we do the other 11 months of the year, which is write, record and tour our non-Christmas songs.

Kerri: It’s not a movie, but my favourite Christmas special is “A Colbert Christmas: The Greatest Gift of All!” It’s so Colbert: weird and absurd and somehow also Christmas-filled. I love it.

Kerri: My mother-in-law and my sister, Michelene, both make delicious Christmas cookies. I don’t think I’ve ever actually eaten a slice of Christmas cake. Is that possible?

Kerri: I mean, for me, festive or not, a perfect cup of coffee on Christmas morning is all I need to be happy.

RMC: Be honest. At this time of year, do you really dream of a white Christmas OR white, sandy beaches and sunshine?

Kerri: I feel like my identity as a Canadian is so wrapped up in fully loving all the seasons we get to live through, and it’s undeniable that snow at Christmas time makes me feel 10 again. It’s such a wonderful feeling to watch snow coming down – so long as you’re comfortably sitting inside all toasty by the fire looking out at it instead of trying to drive somewhere in it.

RMC: I’m not going to ask if you’ve been naughty or nice. We’ll assume the Good Lovelies are the latter. Sooooo, what would you like from Santa this year?

Kerri: Well, I’m hoping Santa will bring me an upright piano, a moving company to move it carefully, and then a professional piano tuner to get it into working shape. Please, Santa? I swear I’ve been good this year.

RMC: I’m sure you have been, Kerri.  You’ve been nice enough to answer my questions, so I hope you, Susan and Caroline, get all you want for Christmas and more.  Enjoy the holidays.

There are still limited tickets available for the The Good Lovelies Christmas show Sunday at Port Hope United Church.