Corby sets up the Small World Music Festival in Toronto 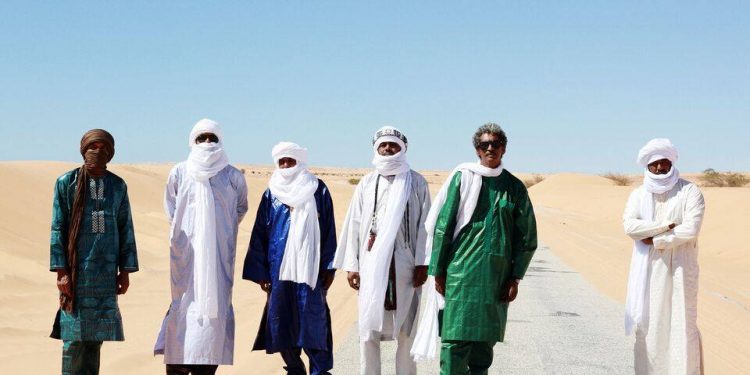 Tinariwen performs at the Small World Music Festival in Toronto.

Once again, Toronto’s Small World Music Festival, now in its 18th year, unfurls the whole world in our very laps for us. Offering a rich buffet of culturally diverse musical delicacies over the next two weekends, and foregoing the centrally-located strategy of last year’s Harbourfront event, a range of small, medium and large-sized venues are slated to host a cornucopia of virtuoso ensembles, representing the unique bounty of the far continents, with pods of vibrant communities arriving here from desert and jungle, bearing crucibles of their corporeal, rhythmic and melodic languages that will generously introduce us to frontiers beyond our known range of vocabulary.

The largest turnout will be expected for Tinariwen’s return to the west from Algeria after so many years. Their eighth full-length album, Amadjar, was released on Sept. 6, and their show is scheduled for Saturday, Sept. 28 at the Danforth Music Hall. Their buzzsaw intensity will charge all of the attending hearts, and the following night, across town at Revival, Brazil’s voluptuous Teto Preto will be galvanizing the hips at much the same sub-atomic level.

Mongolian folk/punk ensemble Hanggai kicked off the festivities yesterday at Revival, blending traditional Mongolian folk sounds and instruments with modern punk rock styles and bi-tonal throat singing, working “to express the voice of a generation yearning to reconnect with its ethnic roots in the face of a domineering mainstream culture”.

Today, the immaculate sound design of Small World Music Centre will be at the service of experimental exploration arising from the ad hoc synthesis of the talents of three of Toronto’s finest – Sina Salimi (santur), Barzin (guitar and vocals), and Hassan El Hadi (oud) – as they develop the effective potential of balladry and lyricism, fusing the eastern and western traditions of emotional expressiveness.

Korea’s Namu will occupy the same space on the equinoctial Saturday evening. Building on their collective training in traditional instrumentation, with continuous experimentation in new forms of creative expression, NAMU’s originality and creativity has guided them through a number of projects including elaborate collaborations in classical music, contemporary jazz, and dance beats.

Sunday welcomes a broad spectrum of exemplary global sounds, presented for free at the new venue, Stakt, at the foot of Bathurst.

The following week, the beat picks up again on Thursday night at Toronto’s premiere international music venue, Lula Lounge, with the coincidental opening night of the separate Women In Percussion Festival, (running Sept. 26-29) hosted by Adriana Portella, an accomplished percussionist, drummer and founding member of the band Didá. Adriana has played with Caetano Veloso, Gal Costa, Simone, Elza Soares, Carlinhos Brown, Shakira, Daniela Mercury, Margareth Menezes, Milton Nascimento and Vanessa da Mata.The best of Toronto’s female rhythmatistes will be performing and blending our planet’s many pulses toward a discovery of the universal beat.

On Friday, the Small World Centre will again be given over to the ethereal, as two rising stars of South Asian strings, Rhitom Sarkar, master of the Hindustani slide guitar, and Sitarist Rakae Jamil, celebrated for his traditional skills as well as adventurous fusions take the stage. The two will combine forces for a rousing “jugalbandhi” to finish the evening.

After the grand finales of the final weekend, whatever Tinariwen and Teto Preto have left us of our sensibilities will be stretched, energized, reconstituted and evolved to a grand planetary scale not unlike that of the gods of music. Bring extra ears, or you will have to grow yourself a new pair.