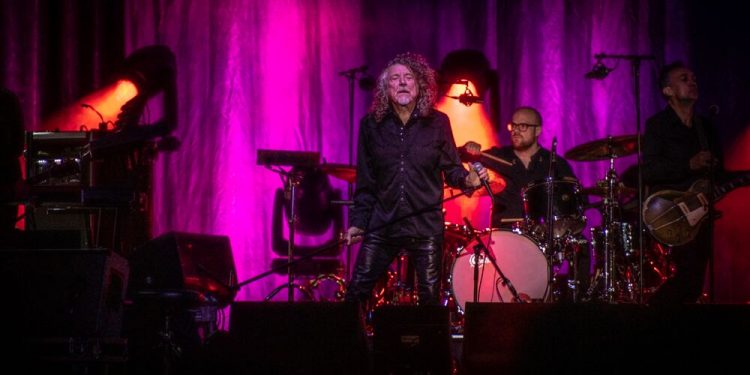 The sun was shining Sunday afternoon at Ottawa CityFolk, and many people started streaming in with Led Zeppelin t-shirts and memorabilia.  There was a little excitement in the air in anticipation of the night’s headline act. I arrived in time to catch a little of Caroline Rose’s angsty, serious synth pop.  They were a refreshing band to catch.  Caroline offered a glimpse into her perspective through her comment “Look. This is 2019. If you say you’re not dealing with any kind of anxiety or mental health issues, frankly I just don’t trust you.” Her music tackles serious issues but presents those topics thoughtfully and somewhat ironically through a synth pop lens. 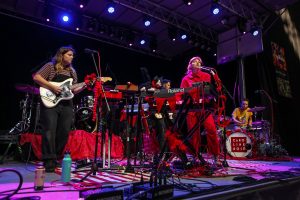 Outside, Lucy Dacas’s band were lounging on the mainstage, at one point sitting kumbaya style on the floor.  The vibe was pretty low key.  Lucy has a nice voice and some great songs she was performing for the dinner crowd.   I would have preferred catching Lucy in a more intimate setting where her thoughtful songs could have more naturally connected with the audience. 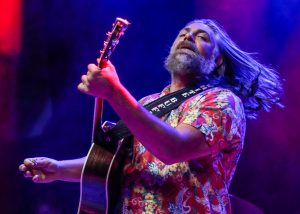 The White Buffalo took to the Ravenlaw stage next; the project took the form of a strong dynamic three-piece rolling out a solid set of campfire tunes.  Jake Smith’s barreling voice dialed into focus when they pulled back a little for a love song.  The guys were entertaining and the lyrics memorable.  White Buffalo are no stranger to the road and have just released their sixth album, Darkest Darks, Lightest Lights.

Harrow Fair brought their musical romantic rivalry to the stage to close out the evening indoors. The Miranda Mullholland and Andrew Penner Duo got the crowd going with their brand of stomp folk that included new material from their expected upcoming album. 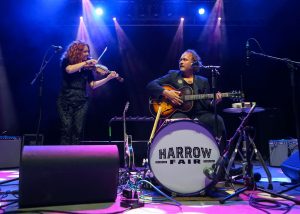 Dawes took to the stage early.  The audience was awaiting Robert Plant, so they had their work cut out for them. At one point the frontman even acknowledged, “We hope we’ve got a chance.”  They did win over the crowd eventually with their sophisticated pop rock.  Their music is personal, wading in to relationship break-ups and personal introspection, but it is also political at times as.  One example is “Living in the Future,” which points out “that feeling that I’m being watched is not a feeling anymore”. 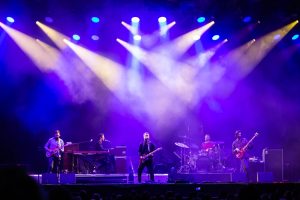 As darkness settled in, as an opening to Plant’s set, on the big screen appeared 16-year-old Swedish environmental activist Greta Thunberg. The video conveyed part of her speech at Davos.  Her message on behalf of children everywhere, her concern over this generation’s complacency, her concern that her generation and future generations will be forced to live with the inaction of governments and the corporate world in consideration of the environment was powerful.

Robert Plant took to the stage with his impressive band, the Sensational Space Shifters, and simply spoke the words, “And if you say to me tomorrow,” and that’s all it took. We were all in.

This was to be a musical journey, each song an exploration of how and what would be presented by each artist on the stage.  Robert at one point commented on the audience’s naturally percussive nature, even we were a part of that stage.

Opening with Led Zeppelin’s “What Is and What Never Should Be,” Robert’s performance highlighted that balance of the delicate and the powerful that Zeppelin and Robert, with his voice, are somehow able to pull off.

Then it was on to some more recent art, from Lullaby and… The Ceaseless Roar. “Turn it Up” got people grooving.  And something off his latest album, Carry Fire, “The May Queen.”  The band, consisting of two guitars, bass, violin, keys and drums, was definitely present.

This multi-instrumentalist band got a mandolin going about halfway through the set; the violinist, Lillie Mae, switched to guitar as the extraordinary “Battle of Evermore” began. This was an unexpected treat.

Robert seamlessly shifted between songs from the archives, such as “Black Dog,” and newer, carefully chosen pieces.  The Space Shifters were sensational in how each member showed their personality in their performance and through their interpretation of the Plant classics presented. 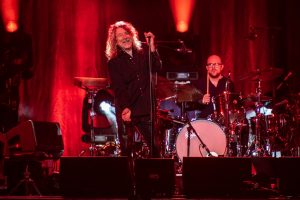 To close the set, there was a rousing rendition of “Gallow’s Pole,” which Robert described as more of a folk song taken from an old Scottish or Irish tale.  He also made mention of Lead Belly’s 1939 recording of the song.

The band returned for an encore, going back to 1983’s Nine Lives and a beautiful song we could all sing.

And of course the coda was what else but a song I see as Plant’s anthem, the classic song “Ramble On,” which left us with a good sense we’ll be seeing him again..

Robert Plant’s performance was an uplifting conclusion to what was quite a festival.  An artist, who just celebrated his 71st birthday continuing to write music, continuing to collaborate, continuing to perform live, sharing his music with generations both old and new.  In an article in advance of CityFolk, Robert Plant made it clear he has no intention of slowing his creative spirit. He even has a new blog he’s released called Digging Deep.

While CityFolk has reached this year’s inevitable coda, Robert Plant, who proved coda is simply an opportunity for a new beginning, rambles on out of Ottawa, continuing his current tour on down through the US.

Shari Ulrich Diptych – A Review in ...