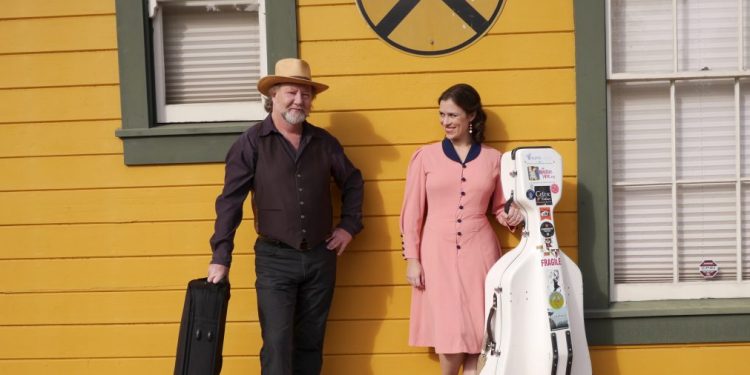 Last week here on Roots Music Canada, we told you about the upcoming album launch by Babe Gurr at Vancouver’s Rogue Folk Club. Well, it turns out that’s not the only thing that’s going on there this month. Far from it! There are four other shows coming up too! For information and tickets please check out roguefolk.bc.ca. Here’s what’s on the calendar:

The musical partnership between Alasdair Fraser, long regarded as one of Scotland’s premier fiddle ambassadors, and the sizzlingly-talented young California cellist Natalie Haas may not seem an obvious one. Alasdair, acclaimed by the San Francisco Examiner as “the Michael Jordan of Scottish fiddling,” has a concert and recording career spanning 30 years, with a long list of awards, accolades, television credits, and feature performances on top of movie soundtracks (Last of the Mohicans,Titanic, Stone of Destiny).

Natalie, a graduate of the Juilliard School of Music, wasn’t even born when Alasdair was winning national fiddle competitions on the other side of the Atlantic. But this seemingly unlikely pairing is the fulfillment of a long-standing musical dream for Alasdair, whose cutting-edge musical explorations took him full circle to find a cellist who could help him return the cello to its historical role at the rhythmic heart of Scottish dance music.

Natalie was just 11 when she first attended Alasdair’s Valley of the Moon Scottish Fiddling School in California. She responded to his challenge to find and release the cello’s rhythmic soul, and four years later, when Natalie was just 15, the two played their first gig together. Now regularly touring with Alasdair and creating a buzz at festivals and in concert halls throughout Europe and North America, Natalie is in the vanguard of young cellists who are re-defining the role of the cello in traditional music.

Now into their 51st year in 2019, the Tannahill Weavers are one of Scotland’s premier traditional bands. Their diverse repertoire spans the centuries with fire-driven instrumentals, topical songs, and original ballads and lullabies. Their music demonstrates to old and young alike the rich and varied musical heritage of the Celtic people. These versatile musicians have received worldwide accolades consistently over the years for their exuberant performances and outstanding recording efforts that seemingly can’t get better…yet continue to do just that.

The Tannahills have turned their acoustic excitement loose on audiences with an electrifying effect. They have that unique combination of traditional melodies, driving rhythmic accompaniment, and rich vocals that make their performances unforgettable. As the Winnipeg Free Press noted, “The Tannahill Weavers – properly harnessed – could probably power an entire city for a year on the strength of last night’s concert alone. The music may be old time Celtic, but the drive and enthusiasm are akin to straight ahead rock and roll.”

Often compared to troubadours like James Taylor and John Denver, Martin Kerr’s soaring voice, storytelling and intelligent lyrics connect with hearts of all ages and backgrounds. Born and raised in England, Martin travelled to 35 countries, gathering experiences and stories that would later become the inspiration behind songs like “Mr. Liao,” “Undiscovered Geniuses” and “Must Be a Million.” Starting as a busker at the farmer’s market, he built his following one passerby at a time, singing his way from street corners to concert halls and arenas. He achieved independent success in Canada last May when he sold out his own show at the 1700-seat Winspear Centre. He was then invited to open for Sarah McLachlan at Rogers Place arena, and saw his new album debut at #2 on iTunes Canada (all-genre chart).

Sixteen years have passed since Christine Tassan et les Imposteures started tending their craft in the gypsy jazz milieu, and there is no doubt that they are definitely here to stay. Pioneers in a domain usually reserved for men and precursors of the gypsy wave that swept across Québec, this all-woman quartet continues to reinvent this timeless music while integrating new ideas and influences with an originality and flair we have become familiar with. From standards to original compositions, the Imposteures’ musical arrangements innovate, rejuvenate and leave room for unbridled creativity from four talented and accomplished young women.

Maggie May Davis – “Take it Slow”