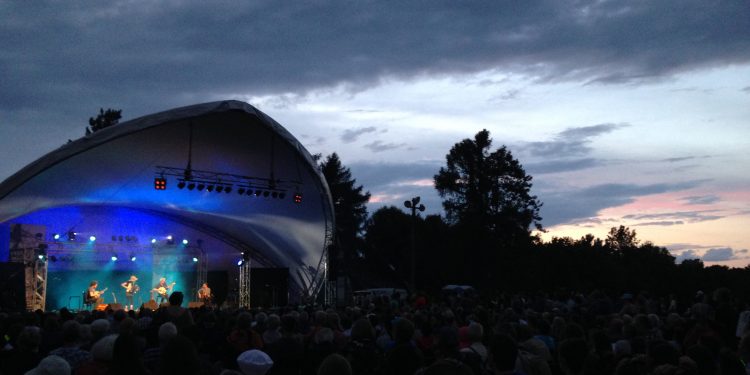 This weekend, the 25th anniversary Festival Mémoire et Racines will take flight in Joliette, QC a mere 50-minute drive from downtown Montréal. This is, bar none, my favourite Canadian folk festival. It’s worth your attention and definitely worth the drive from wherever you happen to be.

Lots of the weekend performances for this anniversary of the first festival 25 years ago echo the lineup from that first year.

Les Frères Brunet – André and Réjean Brunet – were barely out of their teenage years when they performed for the first Mémoire et Racines. Now, they are both members of Le Vent Du Nord, Québec’s whirlwind of a band that tours the world, and that is headlining the Sunday night mainstage.

Other musicians who were around at the festival’s inception include members of La Bottine Souriante, Hommage aux Aînes, La Galvaude and Le Bruit Court Dans La Ville. I’m eagerly anticipating nods to the history of the festival in the performances that are coming up this last weekend in July.

You never know who will turn up at this festival. It’s a lovely gathering of musicians and fans, and it is one of the friendliest festivals I have ever attended. There are side stage workshop performances, mainstage extravaganzas, dances in the air conditioned hall, children’s performances, storytelling, jam sessions, and more.

It’s a tradition at the festival to not only recognize the great talents of the Quebec roots music scene, but also to bring to our ears fresh new talent. Inn Echo, from Prince Edward Island, will play their unique blend of contemporary traditional music. (They will be replacing Cedric Watson and Desirée Champagne, who are unfortunately unable to attend.) Les Poules à Colin are five young people from Lanaudière who have been taking the world by storm during the past two years.

De Temps Antan, Québec’s power trio, will blow us all off our chairs. Damn Tall Buildings will showcase their crazy cool bluegrass music. Talisk will take us to Scotland. Tipsy 3 promise a voyage across Canada. Andrew Collins, by all accounts the finest mandolin player in Canada, will strut his stuff with his trio. Polky Village Band will take us on a musical journey to eastern Europe, and Pete’s Posse, from Vermont, will take us somewhere else altogether. The only guarantee is that your feet won’t stop moving, and you’ll be hearing the melodies in your head long after it hits the pillow.