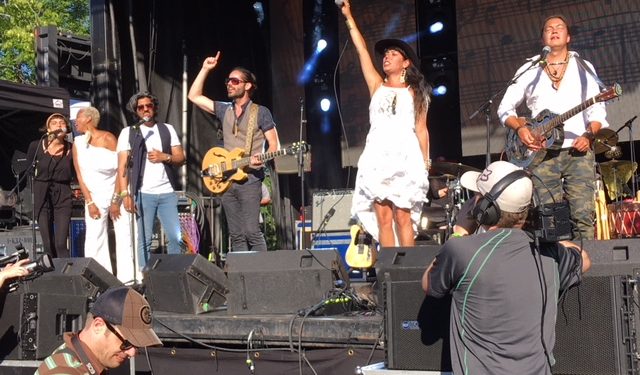 For the final day of Mariposa my first stop was the Hockey Cards in the Spokes workshop, featuring a Mount Rushmore of cool, critically-acclaimed indie rockers of the past 15 years or so: Hawksley Workman, Jeremy Fisher, Danny Michel, and Jim Bryson on the Mariposa Pub Stage at 1:30 p.m.

The line comes from Hawksley’s childhood memory song “The Battlefords,” so nostalgia became the theme of the workshop. As Hawksley sang that song, in a slower and richer version than the recorded one, and “1983,” it really struck me how dramatic a singer he is, wringing all the emotion out of any given lyric and with the occasional purr or yip or growl. Before playing “Heavy Metal Girls, Jim Bryson told a long, long story about his first day in high school in the early ‘80s. It was about thinking English pop music of the day was cool, bringing Human League and Culture Club posters for his locker, getting a rat-tail haircut, wearing high zip-up gray boots, and feeling completely out of place next to lockers filled with Black Sabbath and Ozzy Osbourne posters. The story was so long (he really is a comedic raconteur with this material) that before Jim started playing the song, Danny got up as if to play, saying in jest, “We think that counts as a song.” When he did get up to play, Danny sang “Take Me Back,” offering fun references to his ‘70s youth, including a shag rug, a David Bowie T-shirt, Farrah Fawcett, Lee Majors, and beepers and pagers. Jeremy played “The Bride is Dead,” and “Highschool” of course, after which Jim pointed out that part of the melody echoes Ozzy’s “Crazy Train.” I didn’t expect two references to Ozzy on a folk fest stage, but that’s how workshops go sometimes.

Next up, I was excited to go to a workshop with artists that I’d not heard of before. The Rooted in Country workshop with Colter Wall, The Doozies, and Courtney Marie Andrews was on the Bohemian Embassy Stage at 2:35 p.m. I couldn’t actually see the stage but was happy just to find a shady spot and an empty seat to sit in on this third blisteringly hot day in a row. (I’m not complaining, it was gloriously beautiful weather and definitely so much better than rain!) Courtney Marie Andrews sang a protest song called “Border” about the horrible things going on at the Rio Grande near where she grew up. It was a pleasure to hear her strong, pure voice, singing “you cannot judge a man until you’ve been down the deepest well.” Her song “Rough Around the Edges” made me think that she’s a very Texan kind of songwriter, telling her stories like Steve Earle or Townes Van Zandt, with very few, well-chosen words. The Doozies (a trio of guitar, fiddle, and standup bass) brought good cheer and energy as they played “26 Ounces” (which, they sang, “makes 13 drinks”). While the song celebrates alcohol, it’s more about the fact that there’s lots of fun to be had without a TV or radio, just a guitar and some voices. They’re living proof of that. For the Saskatchewan-born Colter Wall, who sings and plays authentic working cowboy songs,  it’s all about his deep, gentle-but-firm, maple-butter voice, which conjures up an entire bygone cowboy era all by itself. “Houlihans at the Holiday Inn” offered a good example, and featured a horse-riding line about putting “boot-heels to belly.” I could’ve listened to his voice all day.

I then made my way through the desert-like heat, to the Estelle Klein Stage for The Troubadour Session workshop at 3:50 p.m., featuring Hawksley Workman, Steve Poltz, The LYNNeS, and Australian singer-songwriter Ziggy Alberts. Hawksley played “Your Beauty Must Be Rubbing Off,” “The Battlefords,” and a song (I missed the name of it) about leaving the beaten path and seeing creatures out in nature – preceded by a story about how he wanted a ski-doo as a kid, begged his parents for one, was denied, and finally got a vintage one as a middle-aged adult, only to find that it can be very dangerous. The song featured the key line, “Mixing oil and gas / I don’t know the ratio / But it feels too late to ask,” followed by a roar of laughter from the audience. Steve Poltz stole the show with a song he co-wrote in 24 hours, “Sewing Machine,” a Tom Waits-like nightmare fairy tale about an evil old man who sews children together and attaches them to the wall of his house in the forest, and how a kid named Ben saves them all, and the bad guy ends up in jail for life, “making amends mending clothes.” It was a brilliant performance all around, and I was equally elated and frightened. The LYNNeS (Lynne Myles and Lynn Hanson) played a shining version of “You Gotta Have Rain,” as in, “if you wanna have flowers, you gotta have rain.” As they did, it occurred to me that there’s too little female representation at the workshops. Most often it’s only one woman and a bunch of guys. Even on the mainstage, it’s far from a gender-balanced slate of artists. Mariposa can and should do better. Here’s hoping they will.

And speaking of the mainstage, children’s entertainer Fed Penner played it at 5:00 p.m., entertaining fans of all ages with his warm, captivating ways, and playing all of the songs so beloved by generations of folks who grew up on his music. Because, as he said, “I’m from the ‘60s!,” he played “Puff, The Magic Dragon” as well. He closed with a great version of “The Cat Came Back” and acknowledged how common the four-chord, minor-key, descending pattern is by singing snippets of Ray Charles’ “Hit the Road, Jack (cat),” K-Os’ “Crabuckit,” (catbuckit) and The Turtles “Happy Together” to the “Cat” chorus melody. He’s just so charming.

Anishnabe duo Digging Roots hit the Mainstage at 5:50 p.m., as singer ShoShona Kish started by acknowledging “the beautiful Anishnabe land on which we’re all enjoying music today” while husband Raven Kanatakta riffed away on the electric guitar. They played “Cut My Hair,” a tough-blues “medicine song” of the hard truth we need to hear about residential schools in order to do the work to move forward. The always-mindful ShoShona introduced their song “AK-47” by imagining a Canada where we take billions of dollars away from military spending and devote it to education or to Indigenous children “knowing the feel of their own language on their own tongues.” The band featured Alysha Brilla capably handling backup vocals – singing with Digging Roots at their invitation for the first time ever – and Mike Celia on electric guitar, while Shakura S’Aida joined for one song as well. They played hard-groovin’ blues-rock with Raven leaning on the wild wah-wah like an Anishnabe Jimi Hendrix. ShoShona told the story of auditioning for Mariposa when they were just starting out about a decade ago and how they won a slot, earning one of their first gigs ever. They ended with the powwow tradition of an All Nations Dance, where all in the audience join hands and dance in a circle. It was a captivating set of conscious compelling music. As they said after every song, “Chee Meegwetch” (“Thank you very much”).

After a break to grab some dinner – I sunk my teeth into some delicious samosas and a chicken roti – I managed to catch a powerful performance from Shakura S’Aida at 6:50 p.m. on the mainstage. She brought the house down with her gritty vocals, her incendiary guitarists, and her strong, soulful content. Her performance peaked with a heavy but essential song about a key Black Lives Matter protester being railroaded and beaten by police. She said, “Of course, all lives matter, but black lives matter too. It’s not exclusionary.” Amen to that. She brought Digging Roots and their band members back out onstage, and they helped her rock out the finale of her set. The song called for everyone to stomp, clap their hands, and moan. She explained that the devil can’t hear you if you moan, and to hear everyone onstage and in the audience moaning (more like humming) together in true gospel style gave me goosebumps.

Then it was Colter Wall once again on the mainstage at 7:50 p.m. While his four bandmates are all great players (on pedal steel/dobro, harmonica, bass, and drums), I found that the subtle beauty of his voice and the skill of his fingerpicking gets lost in the full band — or at least, it does in a field full of 5,000 people. For me, he sounded better solo at the workshop earlier in the day. Maybe he just needed a louder mix from the sound person — but you get the sense from his low-key demeanour that he wouldn’t go for anything “loud.” It’s just not his style. His talent remains undiminished, but it would’ve been great to be able to hear him without straining.

The same volume issue held true for the songwriter’s songwriter, Jason Isbell, on the mainstage at 8:45 p.m., likely for the same reasons. With the expert backing of Sadler Vaden on second acoustic guitar and Amanda Shires on the fiddle, Isbell opened with “Speed Trap Town,” about the prolonged death of a long-hospitalized loved one in the family while the singer is far away from home. Isbell writes some of the most striking lines of deep truth you’ll ever hear, and they really come through in the live setting. Like “The right thing’s always the hardest thing to do” in the song “Those Were Different Days.” Or  “Daddy said the river would take me home / But the river can’t take you back in time / And daddy’s dead and gone.” Interestingly, Isbell seems quite aware of his own privilege, as he refers in a few songs to being a white man. He told the very engaging story of  getting his song “Maybe It’s Time” recorded and sung by Bradley Cooper in the huge hit movie A Star Is Born. He said when he received a version of the Cooper-sung song – which he was afraid might not work – he waited six hours on a flight across the U.S. before he dared to listen and was greatly relieved when it sounded fine. Then he saw an interview with Cooper on TV, and the actor said he was the one whose nerves were wracked wondering if Isbell was going to approve of his performance. He closed the story by saying he has Cooper’s cellphone number, but joked that “I won’t give it to my wife.”

I strolled from Isbell’s mainstage set to The Mariposa Pub Stage to catch one-man-band The Suitcase Junket, who was pounding some beat-heavy drums with his feet while strumming a sludgy-sounding acoustic guitar and shouting at the top of his voice. A crowd of young folks was shaking it up along with him, everybody having a whale of a time. Between songs, he joked about being a one-man band (e.g., “My heel’s name is Ronny, he wants me to talk about his side project”) and the life of a touring musician (e.g., “I know where all of the best public washrooms in America are, and a smattering in Canada too”) – so well that if the music thing doesn’t work out, he can always pursue a career in standup comedy. He was a lot of fun.

At one point in his set, Jason Isbell said, “If it’s done right, and it’s from the heart, and it tells a story, it’s all folk music, I think.” That’s the best description of everything I saw at Mariposa this year, and I can’t wait to come back for the 60th anniversary edition in 2020.