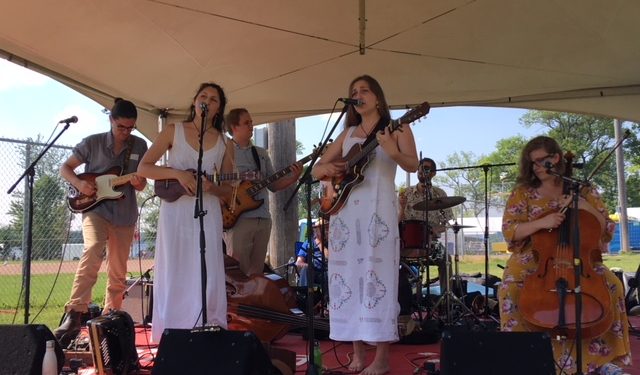 First thing I saw at the fest on Saturday was the Folk or Not Folk workshop at the Mariposa Pub Stage, with A Leverage for Mountains, Coig, and Freddy & Francine at 1:30 p.m. Leverage for Mountains brought the super high energy, the three-part harmonies, and the catchy melodies that got a packed tent clapping and head-bopping along. Freddy and Francine were offering us more of a slow-burn blues vibe, with some sweet electric guitar and nice dual harmony. Coig played all manner of traditional Celtic, Gaelic, and East Coast fiddle tunes, from mellow to boisterous, with verve and aplomb. It was a very pleasant way to begin a day’s worth of music.

Next, it was the We’re All in This Together workshop with Julian Taylor and Digging Roots at the Bohemian Embassy Stage at 2:40 p.m. But of course, we were on folk festival time, so Julian and ShoShona Kish (half of the Digging Roots duo) drifted in a little after Raven Kanatakta (her other half) started with a bluesy jam, allowing himself and the two other guitar players to wail like mad. By the end, Julian and ShoShona had joined in comfortably. In honour of Bill Withers’ 81st  Birthday on July 6,  Julian led them all in a supremely funky version of “Use Me.” ShoShona then led a powerful song of female strength, urging the crowd to go back into their home communities and make it safe for all women to walk on the streets at night. Strong stuff all around. 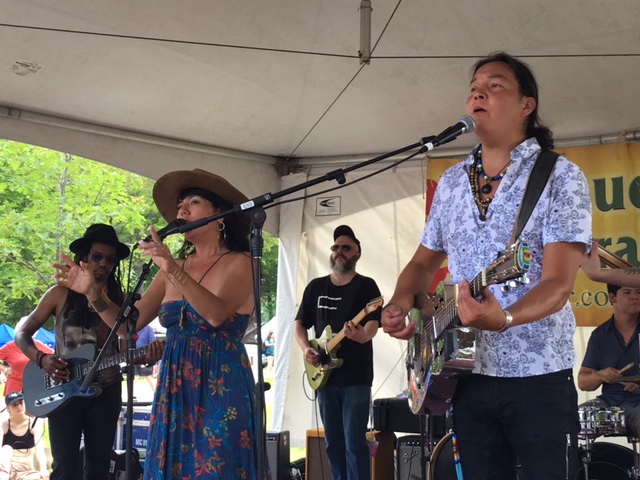 Caught a few songs in passing from the Free Form workshop with Amélie et Les Singes Bleus and The Confabulation at the Barnside Stage at 2:40 p.m. Snotty Nose Rez Kids were scheduled to be there too but weren’t, but The Confabulation played a very sophisticated yet folky blend with Anne Lindsay soaring on the fiddle, and Amélie et Les Singes Bleus played lovely, accordion-fuelled French café music. Wish I’d had time to stop for a whole set but Jeremy Fisher was calling.

I managed to get to the tail end of Jeremy Fisher’s set at the Ruth Stage, which started at 3:00 p.m. As usual, Jeremy played exuberant, rockin’ pop music – in a power-trio format – that charmed the crowd. He forgot to strap on his harmonica for a finale of “Highschool,” so he pulled an actual highschool friend he hadn’t seen in 20 years, who happened to be in the audience, and who’s never played harmonica before, to play the song out, to the end. Which, of course, worked like gangbusters, and the crowd blew up, cheering the fearless friend to the finish. Watch for Jeremy’s animated children’s series, now in production, to hit Netflix maybe 18 months from now.

Then it was on to The Lifers at the Village Stage at 4:05 p.m. The Cazzola sisters, barefoot and in long white dresses (one of them home-made by Anita from an old embroidered tablecloth), played ukulele/accordion (Liv) and banjo/acoustic guitar (Anita) with standup/electric bass, cello, electric guitar and drums. They played a lovely set of gorgeous, thoughtful, artful folk-pop music. Their environmental anthem, “The Tip,” about Mother Nature, featured the key line, “You can’t hear her crying, but I can feel her dying.” Their music was beautiful, delicate, and utterly captivating, though “The Moon and The Stars” boasts a powerful, hard-rockin’ mid-section. The Cazzolas’ parents were in the audience, and dad was wearing a band T-shirt, naturally.

After a break to have a seat in the shade, I made it to the Mainstage for The Julian Taylor Band at 5:50 p.m. It was one of the best sets he’s ever played, and I’ve seen him a lot. He started out with what’s usually his finale, the hell-bent-for-leather “Zero to Eleven” – which he crushed, setting a super-high bar for the rest of the set. He totally lived up to it and kept that soulful, loving energy up the entire time. “Just a Little Bit More” prompted a thick crowd to start dancing in front of the stage and cheering Julian on. Said dancers included Alysha Brilla, who said she was seeing Julian for the first time and that she enjoyed his set. Julian proved himself quite the traditional soul man, too, whether crooning like Marvin Gaye on fire in “When I’m Gone” or blasting out a perfect Stax/Volt-style workout like the closing “Set Me Free.” He was, in a word, awesome. 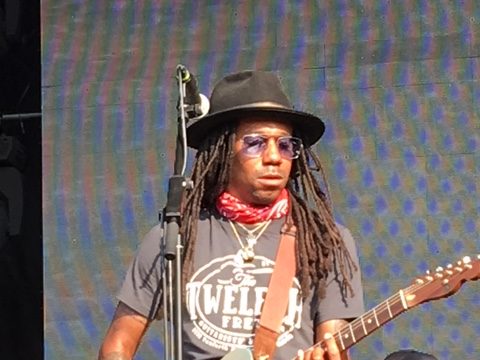 I grabbed some dinner (the local Thai Plate vendor booth serves up some tasty cashew chicken, and their wontons are superb) and enjoyed it while watching the Mariposa Hall of Fame inductees, including Sharon and Bram and Jerry Gray of The Travellers, who were interviewed and awarded. It was great to see early footage of The Travellers performing at the first Mariposa and to listen to band member Jerry Gray talk about Pete Seeger giving them the song “This Land is Your Land” to change up and sing in Canada, because he couldn’t do it in the U.S due to being blacklisted.

Then Terra Lightfoot was on the mainstage at 6:55 p.m. “No Hurry” was just great, as was “Pinball King.” It’s so encouraging to see a woman fronting a noisy, bluesy, power-rock trio, wringing the juice out of every note, and playing electric lead guitar like a brush fire gone wild. Lightfoot extolled the virtues of making music and seeing music together out in nature, and she got the crowd to sing along en masse to her song “Love in Vain.” “Not exactly folk music,” she herself said, but everybody had a great time regardless.

Next up on the mainstage was Martin Sexton at 7:50 p.m. True confession: I saw him more than 20 years ago at the Summerfolk Festival, when I played onstage in a workshop with him, and he’s been making music for even longer than that. It was heartening to see that he’s still in absolutely impeccable voice, with a falsetto to die for, and is still a great guitar picker after all this time. He holds the audience spellbound, does the most realistic mouth trumpet ever, and has an amazingly accurate  drum kit impersonation too. Moving between smooth ragtime, folk, funky stuff, and gentle grooves, he followed no set list and played all kinds of requests, as long as the audience agreed to sing along to them. In fact, he’s constantly engaging the crowd, getting them to sing along and do his background vocals. A lot of the content is about being, as the Dylan lyric says, “condemned to drift or else be kept from drifting.” Sexton truly is one of the great singers of our time. He earned the first mainstage standing ovation of the fest, and the first mainstage encore of the fest, a quick run through Janis Joplin’s “Mercedes Benz.” It was a very satisfying set.

I caught the second half of The Free Label’s set at the Mariposa Pub Stage, and they were absolute fire, totally blew the roof off the place. The crowd was completely overflowing – 20-deep on the lawn surrounding the tent and onto the grass – and shouting along like drunken sailors. The band’s super-catchy soul, funk, disco, and rap borrowed liberally from standard tropes of the genres, and the ensemble covered classics like Funkadelic’s “Give Up the Funk,” Nelly’s “Must be the Money,” and Shaggy’s “It Wasn’t Me.” They closed with an irresistible cover of “Uptown Funk,” which brought the house down. If you ever want to see an explosive live act, or dance your ass off all night, see The Free Label. You won’t be sorry you did.

Snotty Nose Rez Kids followed on the Mariposa Pub Stage at 9:45 p.m., and they were superb. Playing material almost entirely drawn from their current, excellent Trapline album, the Indigenous Haisla rap duo Young D (Darren Metz) and Yung Trybz (Quinton Nyce), with DJ Mel Boogie (not their usual DJ Kookum), schooled a full crowd of mostly young white kids about where it’s at for First Nations youth in 2019. They prowled the stage, wildin’ like crazy, stating their case with passion and integrity as they shouted out one great song after another: “Lost Tribe,” “Hooligans,” “Urban Legend,” “Boujee Natives,” and “Savage Mob.” It was a little disappointing that “Son of a Matriarch” was cut short, and didn’t include The Sorority (who were coming up after them). But that was all forgotten when the set peaked, as they came offstage and into the crowd to explode – them and us together – with “I Can’t Remember My Name” and “Aliens & Indians,” followed by a blessing of water sprayed from the stage, which may have been the peak of all the brilliant music made on Saturday. It was an amazing moment, and a great way to end my musical adventures for the day.