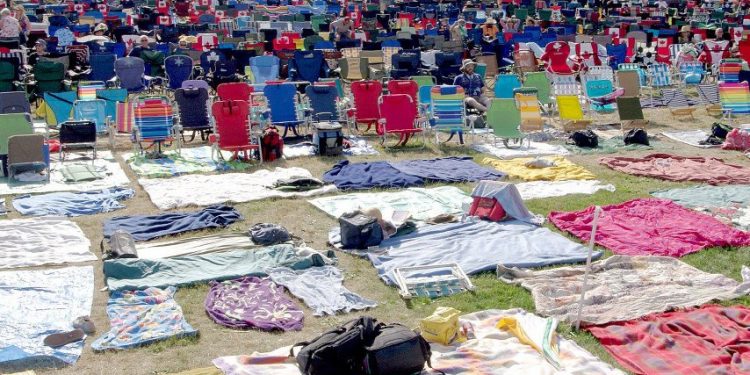 I got to the Mariposa mainstage just in time to see Ralph suitably attired in a hot pink outfit that perfectly matched her ‘80s disco-pop sound, which featured live bass, keyboards and drums, and some pre-recorded or looped music. To me, she sounded not unlike mid-‘80s Madonna, especially in the material girl vibe of her song “Give It to Me” – a little more self-oriented than the usual communal spirit of Mariposa. Her strong, pure voice immediately won me over and kept a small but enthusiastic crowd of young kids dancing up front, while a field full of older folkies sat enjoying the show in their folding chairs.

“Believe it or not, I come from a folk background,” said Ralph, promising to take part in several workshops over the next few days. “Tables Have Turned” and “Cold to the Touch” were outstanding.

I wandered over to the Mariposa Pub Stage for a bit to catch some of The Burning Hell. They’re a quartet full of multi-instrumentalists – everything from a sax to a bouzouki – whose sound falls mid-way between ska and klezmer, with a very Euro feel throughout. Their music was fast, high-octane, tight, well-arranged, and a whole lot of fun, both for me and the packed tent to which they played.

I got back to the mainstage to catch about half a set of classic solo-acoustic folkie Steve Poltz, and boy, am I glad I did. He’s an excellent picker and a live wire, and he embodies everything that’s good about folk music (heartfelt emotion, a strong sense of community, a great sense of humour, a love of improvisation, and so on). It’s impossible not to love the guy. He told a loooooong but very entertaining story about buying his father a cheeseburger on request the day before he died, and several about other family members beating cancer. The chorus to one song went, “I’m emo, I’m screamo, Americana if you wanna, I’m old-fashioned but I’m woke … Mostly I’m just here to sing for you.” He took a photo of the stunning sunset while onstage, just to be in the moment, played a lovely John Hartford instrumental called  “Presbyterian Guitar,” and reminded us that “Everything is a state of mind.” He asked the kids in front for a song suggestion, then invented a song from it, using loops and other technology.  The chorus went, “Chillin’ on the beach in Orillia / Looking for a thrill-ia.” He told a brilliant story about encountering an 85-year-old man at another folk festival in the U.S., who was so moved by Poltz’ performance that he cried and said he was reminded how much he loved music, and asked for a hug (which was given). Then the guy put on his “Make America Great Again” cap. Poltz admitted he would never have talked to the guy if he saw the cap first, then realized the genuine and beautiful moment he would have missed.

“That’s when I knew I was here to be a uniter, not a divider. Music can do that,” he said to applause from the crowd. And Amen to that, I say, and hooray for Steve Poltz!

While waiting for the next mainstage act, I caught the beat of Boogat wafting in on the breeze. It sounded tantalizing even from afar so I’ll have to catch him tomorrow.

Montreal’s Half Moon Run took to the mainstage about 10 minutes after their 10 p.m. start time, with a slow, moody buildup to open the show. With guitar, bass, drums, and keys, they played a set of atmospheric art-rock that was a little more daring than Coldplay, a little less daring than Radiohead. Perhaps the closest reference point is U2, especially in the shimmering electric guitar, heavy drumbeat, and slow vocals against a faster beat. All in all, I found them pretty charming. “Turn Your Love Way Up Inside,” was played early in the set, was percolating at a good clip, and sounded richer and fuller than the recording. It was a very hot, muggy night, after earlier rain showers, so the bugs were out in full force. Their keyboard/bassist said, “There’s a lot of bugs up here. I’m not trying to, but I’m killing some of them when I’m playing my keyboard.”

It was a great night of music to whet my appetite for the remainder of the festival. Looking forward to tomorrow!