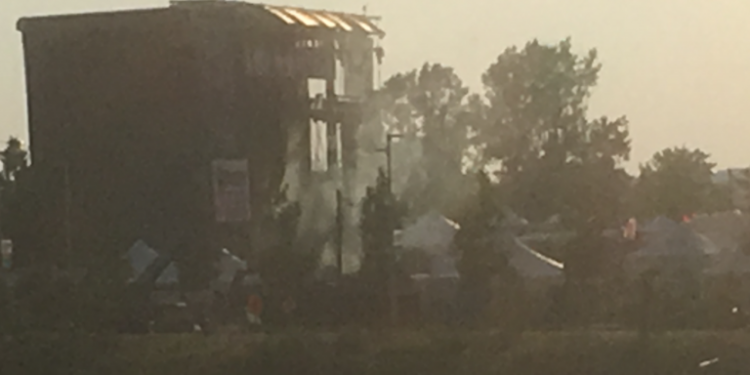 Crossing the Eddy bridge, approaching the festival, I saw smoke rising from the City Stage.  It was appropriate. We are under a heat advisory. It‘s early evening, yet it’s still 37 degrees with the humidity.  Wow! 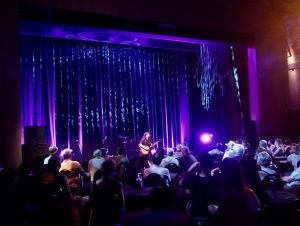 It is Bluesfest’s opening act, and it is bustling.  There are a lot of people out despite the heat.  The stage’s are set for the night ahead, a great mix of acts, from folk to pop, alternative to rock.

The obvious change from previous years is the missing stage on the main lawn.  There used to be two facing off.  The festival is paired down a little this year.  You do see some commercialization slipping in: OLG is in the house … and Coors.  There are efforts, particularly with the food vendors, to keep the signage nondescript.  Despite those realities, which speak to the economic challenges that face festivals these days, it is beautifully run.  The volunteers are friendly and helpful, the line-ups are reasonable, the chairs are kept back from the stage, and it is a great experience.

I stepped out of the heat and in to the Barney Danson Theatre to begin the night.  Abigail Lapell was playing indoors to standing room only.  Alone on stage with her beautiful pale sunburst Gibson ES 335, she played a wondrous set.  She offered tracks from her new album, Getaway, which she described as runaway songs about breakups and alien abductions, along with songs from her award winning album Hide Nor Hair.

The songs were beautiful, and her introductions equally captivating.

Abigail’s disarming manner draws you in, as does that distant blues harp tone, her whistling, the beautifully told tales from the road – it all equates to a unique, memorable experience.  The highlight for me was “Murder City,” sung a cappella as she used her Gibson as a drum.

Chvrches, who were playing the mainstage as I stepped back into the heat, were rhythmic, symbolic and captivating.  They are a synth pop band, seductive and surprisingly compelling. They had the crowd singing along! 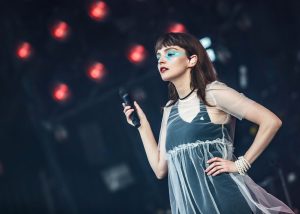 US Girl’s psychedelic rock jam band style was   entertaining, with their dancing, musicianship, interactions on stage.  But there’s more to this band. They are taking no prisoners. They are all in. They are unafraid. I caught the last few songs of their set, and they kicked it, and rip roared their way out of their set and off the stage.

Little Steven and the Disciples of Soul brought theatre and heart to the evening.  The show was elaborate, it was rapturous, it was a performance.

Steve Van Zant (Little Steven), also known for his work, as the long time guitar player for Bruce Springsteen, has for years had his own musical projects. He’s been working with this new band for two and a half years, and it shows. They are tight, they’re smooth, and they are entertaining!

Frontman Steven, walked us through his first ever, what he described as a “fictitious” album, Summer of Sorcery. He introduced us, through the night, through each song, to the cast of 12 characters born out of this new album. 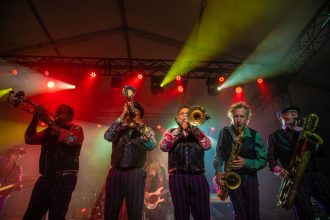 The Disciples of soul were something to behold: a 12-piece band with a full horn section, including a baritone sax, mariachis on one number, two drummers, another guitar player, keys, three backup singers (seemed to be sisters), big hair and big personalities to match.

The band was decked out in an array of costumes that fit the spectacle, the huge songs and production.  It seems there was even a local connection, with Uncle Bob and Fab Gear 64 providing some of the extravagant attire.

The songs are hopeful, if sometimes cliche, they reflect the cliche nature of the show.  It’s marked by, exaggeration, songs you can sing along to, everything over the top, all part of this well conceived show. This was clearly Steven’s vision, and while the Springsteen influence was present, Steven presents through this show, his artistry his musical vision and inspiration, and it’s a joy to experience!

One of the beautiful things that arises out of the festival experience is that act that surprises you.  Tonight for me it was the band Alt-J. They were original in their melodies, harmonies, and presentation.  Each member of the trio, on stage, isolated in a metallic blue hue, separated by hanging bars, each in their cell.  Our individuality, our loneliness and our togetherness. Alt-J somehow this night seemed to have found a way to express our world musically.

While the night finally did cool, the music was reflective of the mercury tonight: red hot in either delivery or substance, each act that I caught tonight played their part in delivering a memorable 25th Anniversary Bluesfest opening night!

Dispatches from the Mariposa Folk Festival: ...