Alan Doyle and Friends Aboard the Ocean Endeavour 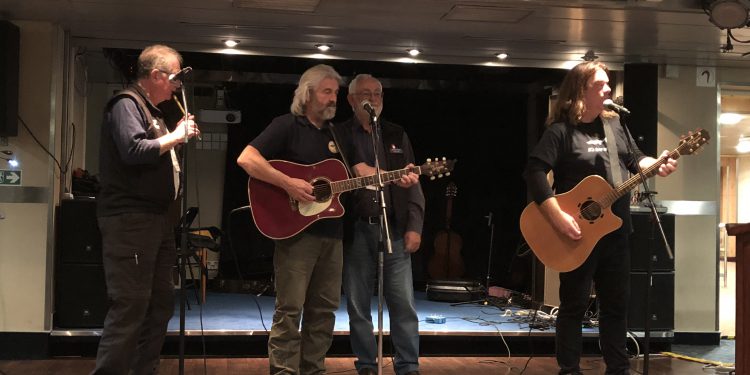 It was a life-changing experience to be aboard the Adventure Canada expedition ship Ocean Endeavour for almost two weeks in early October, circumnavigating our stunningly beautiful province of Newfoundland. We anchored daily into bights, coves and harbours adjacent to UNESCO world heritage sites, outports and scenic destinations, becoming immersed in the physical geography, geology, archaeology, biology and culture of this great island province.

Part of the reason the trip was so exceptional was that there was a huge music component. We were treated to daily doses of Newfoundland music and culture, history and stories, from the likes of singer-songwriter Alan Doyle (Great Big Sea), singer-songwriter-culturalist Tony Oxford, and flute and whistle player Gerry Strong (Cotillion).

Each day would start with a wake-up call from the bridge. Expedition leader MJ Swan would lead off the good mornings with the ship’s latitude and longitude and the daily weather. Then, Tony Oxford would chime in, singing his original lyrics for the day, often recalling yesterday’s excursions, and then looking forward to the plans for the day ahead. It was on-the-fly songwriting creativity from Tony.

Most days, we would disembark from the ship by Zodiac, usually kissed by sea spray. One hundred and eighty odd expedition guests, along with the resident experts, would be ferried to the destination ashore, sorted by their assigned teams, wearing the Adventure Canada complimentary Stormtech jackets along with rubber boots and waterproof splash pants. Ashore, we would hike, cycle, kayak or dive, and some hardy souls even went swimming in the sea. On one excursion, we were in Red Bay, Labrador to hike the archaeological sites associated with the Basque whaling station that existed there 400 to 500 years ago. Alan Doyle was along with us that day. Seeing nearby abandoned fishing boats, we sang “Make and Break Harbour,” Stan Rogers’ composition about the death of the east coast fishing industry, a song that had been in my head ever since setting foot on the shores of The Rock.

In Elliston, down the street from the Sealers Interpretation Centre, Alan stood beside the memorial to the awful sealing disaster of 1914 and sang “I Will Bring You Home.” Two hundred and fifty-one men died in a disaster involving two separate ships. Without the available weather forecasting equipment or wireless communication, they were caught in a bad winter storm, leaving men out on the ice floes over night. Alan’s a cappella rendition of Marion Parsons’ song encapsulated the moving story of a father trying to save his son:

“Stay right by me, follow to my lead
They’ll work you twice what you can take and pay you half your need
Your ma and me, we couldn’t see to send you out alone
I brought you to this frozen waste, and I will bring you home.” Alan Doyle aboard the Endeavor. Photo by Elizabeth Szekeres.

Alan Doyle is a wonderful storyteller as well as a great songwriter. Aboard the ship one afternoon, he read from his book about growing up poor in Petty Harbour – four children, two parents, and one small bathroom in a tiny house.

“We didn’t know we were poor,” he said, talking about the morning bathroom ballet, playing music with his family, making a game out of two sticks and a rock, and living in a close knit rural community – all the things that helped to make him the lovely and talented person he is today.

During some downtime on the voyage, Alan gave a workshop about his approach to songwriting. He lead us line by line through his song “Come Out With Me,” which he uses to open his concerts and greet the members of his audience. Beautifully constructed, the song really encapsulates Alan’s welcoming approach and gratitude for his career as a musician and actor. You can for sure take the man out of Newfoundland, but you can’t take Newfoundland out of the man. He is a big star in the Canadian music universe, but very much remains a Newfoundlander in his approach to people.

In the car-free outport community of François, located in a fjord on the southern shore of Newfoundland, the local community put on a dance for the Ocean Endeavour. Alan Doyle joined forces with Darren Durnford, the resident one-man band, on several terrific songs and then enthusiastically danced with audience members. It turns out that Alan is a great lover of the waltz.

Gerry Strong, Tony Oxford and Alan Doyle all share that friendly, outgoing, welcoming ethos with the people they meet.  All three joined forces several times during the Newfoundland circumnavigation voyage to give us music and humour-filled stories from where they grew up, often joined by other local experts who happen to also be musicians, such as geologist Paul Dean and naturalist Jeff Anderson. Gerry Strong, expert player of flutes and whistles, was raised in Little Bay Islands, as was Tony Oxford. Growing up in a fishing outport only connected by ferry to the rest of Newfoundland gave them both a huge appreciation for community, for stories, for a living connected to the sea, and for the music that warmed their cold winter nights.  After climbing a rickety boardwalk up a low mountain, we stood above Little Bay Islands at the lookout, surveying a stunningly beautiful crescent-shaped bay that was entered through Big Tickle, the only harbor entrance deep enough for boats.

“Make and Break Harbour” again came to mind as we surveyed so many fishing boats “pulled up and rotten” around the lovely harbor ringed by ancient hills covered with the first of the autumn colours. The water was sparkling blue in the Indian Summer sunshine. You had an immense sense of joy for this beautiful place, but also a tremendous sense of sadness, for in two short years, the community was set to disband. The few families remaining had voted to close their outport and move to more accessible towns and villages.

Tony Oxford, culturalist aboard the Ocean Endeavour, has at the tip of his tongue, hundreds of traditional songs from Newfoundland that he can recall at the drop of a hat. Tony has written many original songs as well. Many lament the death of the fishery that sustained the people of Newfoundland for five centuries. Tony told stories and sang about the abundant cod stocks on the Grand Banks, and how overfishing lead to the 1992 cod moratorium, which overnight killed the livelihoods of Newfoundland fishers. Today, he is a vociferous and well-informed exponent of reviving the sealing industry since the overabundant harp seals are known to be a primary predator for cod.

Gerry Strong showed his versatility as a musician throughout the voyage. He was a sideman on whistles and flute during a concert where he joined Alan and Tony in bringing to life the musical culture of Newfoundland. Another occasion had him improvising during a “game show” where the audience had to suss out the real meanings of Newfoundland terminology such as “mauzy,” “spannytickle,” “slouzo,” “bangbelly,” and “tiddly.” Gerry did a bang-up job of filling in the contemplation time with highly creative music in between bouts of uproarious laughter.

Alan Doyle, though, was the musical highlight of the voyage.  During his solo concert, he entertained us with song requests, including Ron Hynes’ “Atlantic Blue,” classic Newfoundland standards, and chart-topping hits from his Great Big Sea era, including “Ordinary Day,” a really joyful piece, which really encapsulates the Newfoundland attitude that it doesn’t matter what crap goes on in your life, you keep a smile on your face and carry on.

“…It’s all your state of mind…

At the end of the day, you’ve just got to say,

Aboard Adventure Canada’s Ocean Endeavour, it was more than alright, and the  music made for an over-the-top magnificent expedition.