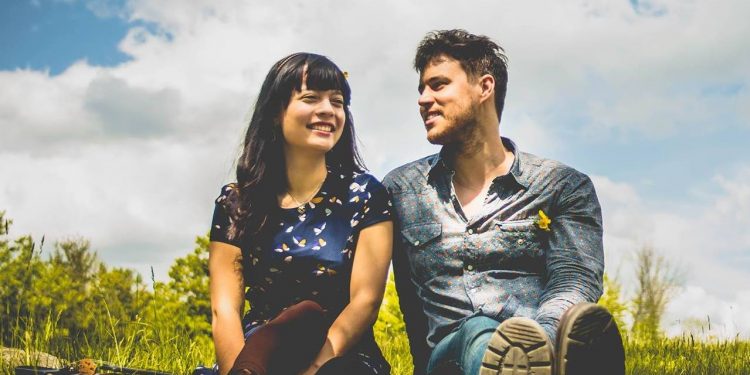 When you become a parent for the first time your priorities change. This little human life form takes precedence, and it’s up to you to re-arrange how you fit everything else into your life. If you’re a musician,, it can impact your playing and writing time, the very thing that puts food in the belly and clothes on the back of your child. But in the last five years, Sarah Frank and Luke Fraser of the Bombadils have discovered how even a few minutes of creative thinking can be used productively.

“It’s surprising how five minutes of writing in the morning can set your day in motion,” said Sarah from their Halifax home. “Then I find I notice things. Even if I’m not sitting down and writing, I get into a reflective headspace by triggering that with a few minutes in the morning.”

The Bombadils’ new album, Dear Friend, comes seven years after their last album, New Shoes, and is described as “a series of love letters of a certain kind.”

“Even before the pandemic, lockdowns, and having a kid, we got to thinking about what really matters to us,” Sarah explained. “That’s where this love letter thing comes from: love including friendship, family and concern for the earth.”

Dear Friend is also the first Bombadils album to feature all original songs.

“Or maybe not necessarily these songs,” Sarah interjected. “But [it] started as a practice and wanting to develop our writing. Some of the ideas might have strayed from that.”

“It was a challenge to ourselves to do a whole album of our own songs,” Luke continued. “We also gave ourselves all the time in the world to do it. We didn’t have a deadline to make this album happen. We just wanted to love all the songs that we created for it. We’re happy with how it turned out.”

What helped their development as songwriters was a daily meeting on Zoom with others doing writing exercises. They also met with some songwriters online to share what they’d written and give each other feedback.

“I want writing to become more of my regular daily life,” Sarah said. “Whereas before it wasn’t. Before it was more like, ‘OK we want to make an album, we’re doing some old folk songs… and also I want to try writing.’ So it’s a bit of a change.”

While all of the songs on Dear Friend are Bombadils originals, a number of them are co-writes with the likes of Dave Gunning, Terra Spencer, Ben Plotnick and Sarah McInnis.

“The song ‘Records and Rent’ has a lot of joking in it,” said Sarah. “I wrote it with Sarah, who’s from the Annapolis Valley. Neither one of us tends to write joking songs, but together, that was our energy.”

Helping out The Bombadils to create Dear Friend was engineer Graeme Campbell, who does live sound at a Halifax venue.

“We started recording right in the middle of the pandemic so we were able to go to his studio and make him part of the ‘bubble,'” Luke explained.

“He was also on the same page about some of our sound goals and how we wanted to capture acoustic sounds,” Sarah added. “Then he’d surprise us with things that weren’t what we would have thought of but still in line with what we liked. So there was a good compatibility in terms of sound.”

The move to Halifax from Montreal, where the pair met at McGill University, was made for family reasons. Luke’s parents live in Halifax, and it was either there or Edmonton, where Sarah’s parents live. Both cities have good music scenes, but even growing up in Alberta, Sarah was drawn to the music of Nova Scotia.

“I was a kid in the ’90s learning violin when Natalie MacMaster was big, the Rankin Family and Ashley MacIssac,” she said. “So even in Alberta, I was hearing all those recordings. Halifax didn’t feel like a stretch as a place to live. There’s a really nice supportive community here, a great songwriter community and tons of fiddle, which is great.”

And for Sarah, there’s an added benefit to Halifax.

“I’m dipping back into classical freelancing a bit,” she said. “I wasn’t really hustling for that but there’s a really welcoming community for that too, so it’s nice to dig into that again.”

Going forward The Bombadils’ method of touring has changed, in that they don’t go off for a month or two at the drop of a hat as they had in the past.

“In our 20s, it was like, ‘Sure we’ll go to Australia for a few weeks,'” said Sarah, laughing. “I think part of it was just the adventure. plus it was a really good learning experience. We’re proud of the album. That in itself feels like an accomplishment. So from here, we’ll just pick away at touring as best we can.”

“I think having a kid really inspired us to figure out what matters,” Luke said. “and deciding what we want to write about and what kind of songs do we want to put out into the world.”

For more on The Bombadils and Dear Friend, go to thebombadils.com.

Friends and fans are preparing to fight ...