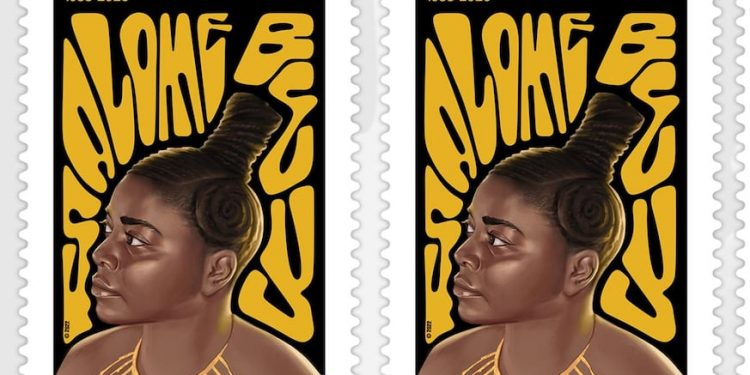 Salome Bey is known as Canada’s first lady of the Blues.

As a tribute to her artistic career, Canada Post has launched a new commemorative stamp, which was released on Friday.

Salome left a mark in Canada’s Black communities, as she pushed boundaries both musically and politically.

Born in New Jersey in 1933, her plans to be a lawyer were abandoned to pursue performing. She made Toronto her home, and her creative talent flourished. She appeared in musicals, including the off-Broadway Love Me, Love My Children, which earned her an Obie Award in 1972. Salome and other performers received a Grammy nomination for Broadway’s Tony Award-winning Your Arms Too Short to Box with God.

Her talent in musical theatre and fight for Black rights continued as she wrote and starred in the cabaret Indigo. The musical celebrates Black music and the legendary artists that came before her. For her performance, she received two Dora Mavor Moore Awards. Indigo aired on CBC in 1984 and featured an all-Black cast.

Her musical Rainboworld gained headway in 1988 as it featured in the Young People’s Theatre. There were 40 children cast, and many of them came from diverse backgrounds. Rainboworld was a platform for children to embrace their musical talents.

Salmone inspired children throughout her career while constantly providing the message that Black people belong everywhere. Several of the young performers would excel and have flourishing careers of their own.

Besides her theatrical talent, Salome sang for audiences in a variety of genres including blues, jazz, and pop. Her career launched her on several platforms from festivals to concerts, television and radio. She performed with her musically talented daughters, TUkU and SATE, along with other musicians as Salome Bey and the Relatives.

Salome constantly participated in charitable events such as “Tears Are Not Enough” to support Ethiopian famine relief. She was a member of Artists Against Racism, an organization dedicated to anti-racist social change. Salome was a key organizer and songwriter for the 1986 Toronto Arts Against Apartheid Festival. The event was held to protest segregationist policies in South Africa and to raise funds for Toronto charities.

Salome was multi-talented and left an indellibel mark on Canada’s entertainment culture. She was an activist and visionary for Black Lives Matter as she pushed for equality and challenged the way Canadians defined art. Her accomplishments are inspiring to many as she led a powerful and fulfilling life.