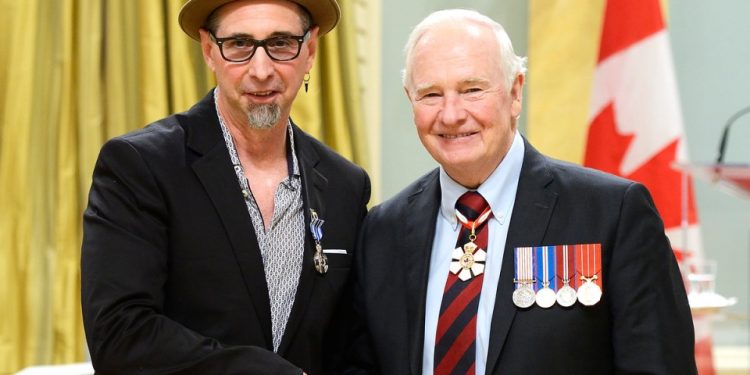 Award-winning Canadian harmonica ace Mike Stevens is set to Breathe In The World, Breathe Out Music with the announcement of his new album — available May 20 via Stony Plain Records.

Known for his genre-bending, rules-eschewing approach to the harp, Breathe In The World, Breathe Out Music spotlights the multi-talented virtuoso in an inventively alternate way; while his unique vocal harmonica technique features prominently across all 12 songs, Mike also provides lead vocals on four tracks — despite revealing a previous discomfort around singing.

Discomfort is an understated yet critical piece of the new LP’s puzzle; while the world was dealing with COVID-19, Mike was also navigating a late-stage Lyme disease diagnosis that saw him experiencing difficulties with walking, cognitive function, and joint pain — to the point of often being unable to hold instruments.

“What happened, in a really strange way, is I played differently than I have on any other record because I didn’t have much memory,” Mike said of the songwriting process around the new release. “I was just reacting to what was there in the moment; it wasn’t about muscle memory, or licks, or things I’d thought about, or lines, or anything.

“It was strictly reactionary.”

“It made it really easy to record,” Mike said of the collaboration process with peers who offered patience and an important support network in addition to talent and skill. “I picked musicians and friends I knew could groove really hard and just respond in the moment, not over-thinking anything. There was no pressure.”

The song recalls the time when Mike and his wife, Jane, were caregivers for his mother. He’d purchased a budgie for companionship for her after his father passed away. Once, while his mother was asleep while very ill, he saw the little bird sitting on her hands for hours.

“It’s just the idea that, even when things were at their very darkest, there’s a light in there,” he said.

It’s his ability to capture life through music while also pioneering advanced harmonica techniques that weave through Mike Stevens’ 35-year career as both an acclaimed solo and collaborative musician, songwriter, composer, educator, author, keynote speaker, and humanitarian — he founded the registered charity ArtsCan Circle in support of Indigenous youth in isolated communities.

The Ottawa Grassroots Festival is happening this ...

Morgan Toney is making a name for ...