Have you bought your Stan Rogers postage stamps yet? 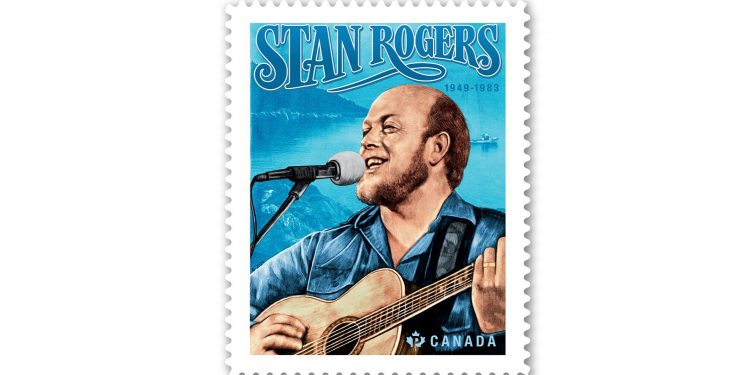 Stan Rogers may never be inducted into the Canadian Music Hall of Fame, despite his vital contributions to Canadian culture, and despite the presence of just about every middle-of-the-road pop singer who’s enjoyed a few years of success (Corey Hart). But at least one Canadian institution is showing him some love: Canada Post.

On July 21, it launched a limited edition Stan Rogers postage stamp, which is available in books of 10 until all 180,000 of them are gone.

The stamp features an illustration by Peter Strain. The foreground is based on a photograph by Paul Coates that was taken at the Calgary Folk Festival in the early 1980s. The background is based on a photograph by Darren Calabrese of Fogarty’s Cove, NS. The hand-lettered wording at the top of the stamp was inspired by the cover of Stan’s album Between the Breaks…Live! 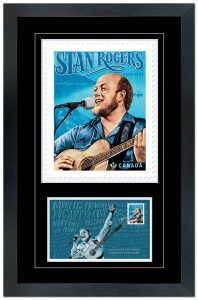 The stamps are permanent stamps, the kind that are always worth the current domestic letter-post rate.

If you’re looking for an extra special souvenir of Stan, the postal service is also selling a limited edition framed enlarged 40 by 55 centimetre reproduction of the stamp and its official first day cover (OFDC).

The first day cover features the stamp, cancelled in Stan’s birthplace of Hamilton, ON, using a cancellation mark that is a line drawing of the guitar that was custom built for him in 1977 by Grit Laskin.

The front of the OFDC features a photo of Stan performing at the Dalhousie Arts Centre in Halifax in the early 1980s, the same photograph that appeared on the cover of his posthumous release From Coffee House to Concert Hall. It also features hand-lettered titles of some of his best-known songs. On the back of the OFDC is a photograph of Stan in 1979, taken by Milena Essig.

The framed stamp and OFCD are going for $99.95 while supplies last.  There are 500 available.

Nearly 40 years after his death, Stan continues to be remembered and celebrated as an artist who gave voice to working Canadians from coast to coast to coast.  And his music continues to be discovered by new generations, as was evidenced this past winter during the #Seashantytiktok craze.

It’s great to see Stan honored with his own stamp, an honour he shares with artists such as Gordon Lightfoot, Anne Murray, Joni Mitchell, the Tragically Hip, Bruce Cockburn, the McGarrigles, Robbie Robertson, Leonard Cohen and Stompin’ Tom Connors.

You know who hasn’t had his own postage stamp? Corey Hart.