90s cult figure Scott B. Sympathy is ‘growing up’ in Brantford as Curve reissues his seminal albums 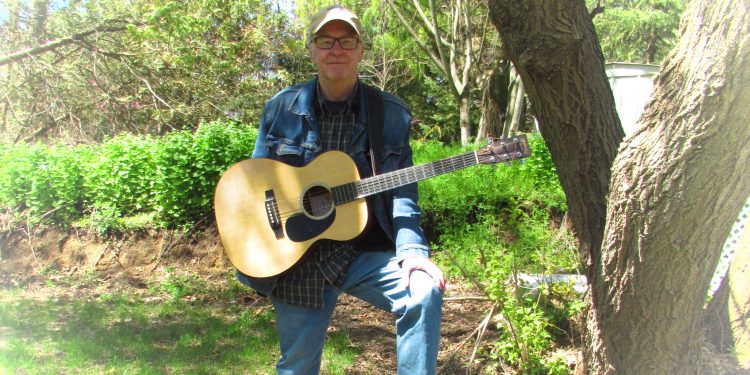 In 1990, at Wellesley Sound Studios on Ontario Street in Toronto, with the regular middle-of-the-night application of “too much coffee and pot,” it happened that Brantford’s poignant acoustic poet, Scott Bradshaw, was gradually transformed into Toronto’s raucous roots rocker Scott B. Sympathy. The two albums he made there, Neil Yonge Street and Drinking with The Poet, staked a claim on new musical territory.

Originally released on Toronto-based indie label Smokeshow, both are finally being rereleased by Toronto’s Curve Music – completely remastered by the original producer – on May 21.  You’ll be able to purchase them on CD, vinyl and, for 90’s holdouts, cassette. The Curve label has championed alternative roots song-craft since their pioneering release, ten years ago, of A Canadian Celebration of the Band, a reimagining of The Band’s repertoire under the direction of Garth Hudson.

The two albums contain 18 original tunes and two covers (“Job Disorder” by Willie P. Bennett, and “Something’s Burning, Baby” by Bob Dylan). Scott’s recorded voice, slap-backed, double-tracked and riding high in the mix, abides in a state of concerned contemplation until it flames into fervid outbreaks of regret and rage to match the fury of Ian Blurton and Gord Cummings’ gorgeous guitar onslaughts. In Barclay/Jack/Schneider’s compendious Have Not Been The Same (ECW Press, 2001), Ian recalls the sessions: “We never rehearsed so… there was a free thing there that allowed you to do stuff that you wouldn’t think possible.” The records will be sought out for their remarkable sound qualities and songwriting, and also as two booming time capsules of 1990s Queen Street West sub-culture.

“Well, a lot of the players had been involved in the punk rock scene,” Scott elaborated, when I reached out to him in his hometown of Brantford, where he has been residing for the last four years. “By the time the second record came out, the worldwide Nirvana thing was happening, and it influenced music everywhere, not just grunge. But that was the nature of the time. I listen to myself on these records, and I think, ‘Why is he trying to scream?’ Maybe cause we felt like no one was listening.”

The magnetism of Scott’s raw country vocals and emotionalism drew an outsider brand of collaborators.

“There were clubs all over town, and it was a very gregarious scene. We were all playing in each other’s side projects and lending each other amps. We still keep in touch by social media, so it feels like I still have them in my life. Which is interesting. I talk to John Borra from time to time. Blurton I haven’t heard from in a few years. And Gord Cummings (his current partner in roots duo Massey Harris) and I talk a lot. We just put out an EP from 2012.”

Etched with unexpected lyrical and melodic twists, steeped in a lonesome abyss of mournful harmonies, and charged with the primordial interventions of electric guitar ecstasy that penetrate to the heart of almost every song, the records erased the border between the new country settlers on Queen Street West and the cresting wave of punk/grunge-rock renegades filling multiple-band bills every night from the Beverley to the Cameron, from Lee’s to Sneaky Dee’s. “All the time that I was waiting / I felt like I was hesitating,” Scott sang.

It was Walter Sobczak, original bass player for Sturm Group, who stepped up to produce the bulk of the material. “It was kind of like doing a double album, they were made so close together, and under similar circumstances,” Scott said. “Walter had to go do something with Dream Warriors once, so the owner, Jeff, actually produced our hit, “Drinking With The Poet,” which CBC and Much Music played a lot. ”

“I was honoured to be a part of that project,“ said Wellesley Sound owner Jeff McCullough, who is thrilled to hear about the reissue. “Scott had some great players, and I was really into what they were doing. I remember we had just gotten a Diaxis Digital Hard Disk Recorder, and while I was recording them, I realized that I had overloaded it by mistake. I was like ‘Oh shit, I’ve ruined the session, you know, because once it’s recorded, that’s it. But when we listened back, it sounded SO dynamic.”

Scott marveled,” I never thought that those records would be relevant 30 years later. And I don’t know what’s actually going on now with the promotion. I haven’t been out of the house in a year. But when I see that 55,000 people have seen one of our videos, I think it would have taken a long time to play to that many people, club by club, back in the day.

“I remember at that time I was letting my subconscious do the speaking and not editing a lot, using words to bounce off each other and tumble down and make a framework. It took me a few years to figure out what some of those songs were about.”

I asked Scott about how he had developed his style from the initial impulse to write.

“I think songs were coming out, and I look back on those songs, and I think ‘there’s not even a chorus there,’” he replied. “No real structure. I didn’t really know about those aspects of songwriting. At first you just write what you are able to, and it seems to come flowing out easily, but the more you learn about songwriting, the harder it becomes. The more you have to reach for things, because of what you’ve learned.”

He recalls listening to everything he could in order to pick up skills and inspiration, especially the poet Jim Carroll.

“I was always enamoured of his poetry,” Scott said, “and just how stark it was, seemingly from another world.  Or somewhere underneath this one. I ended up in the 80s playing a few gigs with him as a bass player with Groovy Religion.”

Is he comfortable with his resettlement in Brantford?

“I used to write a lot of songs about this place when I lived in Toronto,” he said. “Living in Toronto for 35 years and still writing about my hometown. Songs like ‘River Bend,’ about the beautiful Grand River, ‘I Remember Again’… all those songs come from out here. And then once I moved here, I just started missing the city. See, I was still living like a youngster when I was in Toronto. These are my growing up days, I guess. I sit around and contemplate a lot.”

“Well you see I’m aging,” Scott said. “But it’s the same as always, kickin’ around, throwing some lyrics down, following what life brings and trying to be aware of things. I mean, this is a very active time, people trying to figure out what’s right and what’s wrong, what’s real and not real. I’ve lived all my life like this, not really sure what was coming next or having any plans that I could really count on.”