A conundrum on Manitoulin Island involving … a canoe and a drum 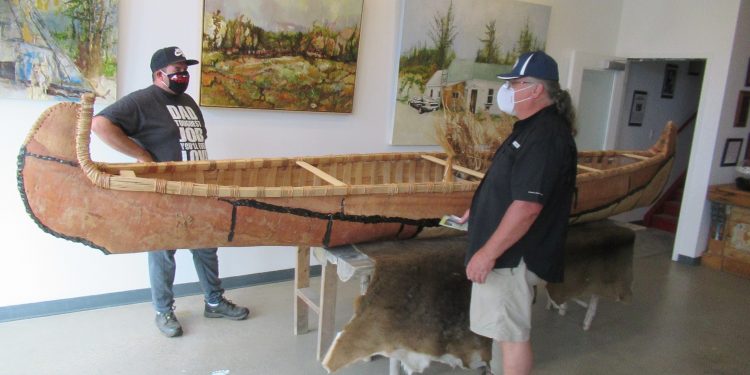 Ten years ago, a rejected gallery proposal involving a flaming canoe sparked some last-minute inspiration. With a canoe at hand, my buddy, artist David Hynes, found himself facing a creative conundrum. In a eureka moment, he considered that the word “conundrum” = “canoe + drum,” and in an instant, a unique Canadian instrument was conceived, replacing a doomed installation with a fresh look at art, music, linguistics, culture and the humble pun. He painstakingly stretched three stitched cowhides over the 12 foot cedar-strip canoe, and his art piece, the Conundrum, manifested itself upon the earth.

Producing a thunderously deep (21Hz) ringing roar, its debut on Good Friday 2010 at La Petit Mort Gallery in Ottawa drew immediate attention from art fans, musicians, neighbours, and eventually, the cops. The power of its low frequency vibration penetrates buildings, bodies and imaginations with equal impunity. When played, often by groups of a dozen or more, it ingests energies from people of every race and age, and provides a unified portal to inner rhythmic resonances that can be physically and spiritually overwhelming. 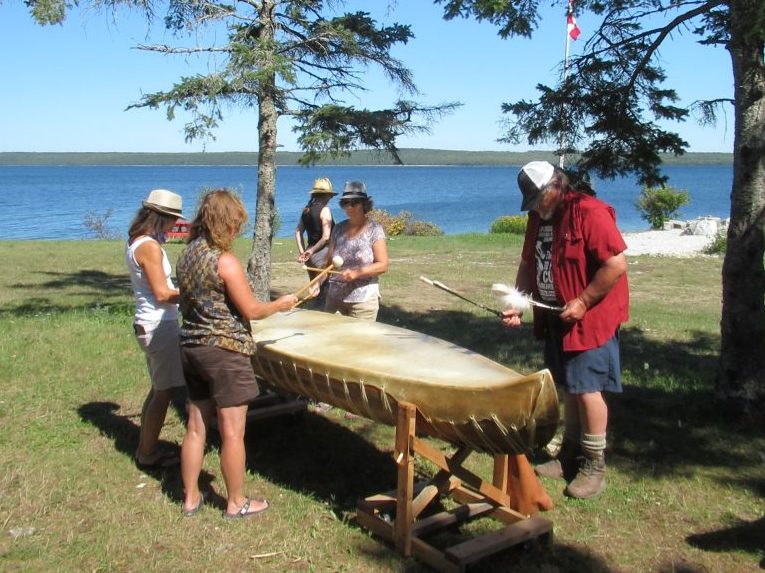 Some of the people who have been caught up in its magnetic field include Santana’s Raul Rekow and Dennis Chambers, Toronto reggae stars Jay Douglas and House of David Gang, and jazz biggies Jeremy Ledbetter and Jane Bunnett’s Maqueque.

Since then, David has “followed the drum” to the 2017 Sesquicentennial at the Canadian Museum of History in Gatineau, the 2015 Pan Am Games in Toronto, the Maritimes, Quèbec City, the Figment Festival in New York Harbour (Brooklyn was particularly delighted with it) and the Muhtadi International Drum Festival in Toronto. The Conundrum has also been invited to innumerable powwows and First Nations events. The First Nations community has been particularly inspired by Dave’s creation. At its first powwow, an elder named it the grandfather drum. He said, “When it speaks, everyone must listen.”

Suddenly in 2020, the world went retrograde, and the drum fell silent. With a shortfall of engagements, Dave and I resolved to take it on its first trip to Manitoulin Island for a week in August. This meant strictly outdoor appearances in vividly isolated parks and campgrounds, the constant sanitizing of drumsticks, limited player groups, and a serious ban on chanting. We traveled to the north, south, west and east ends of the island on consecutive days, creating mini-events and strong connections wherever we unpacked it. 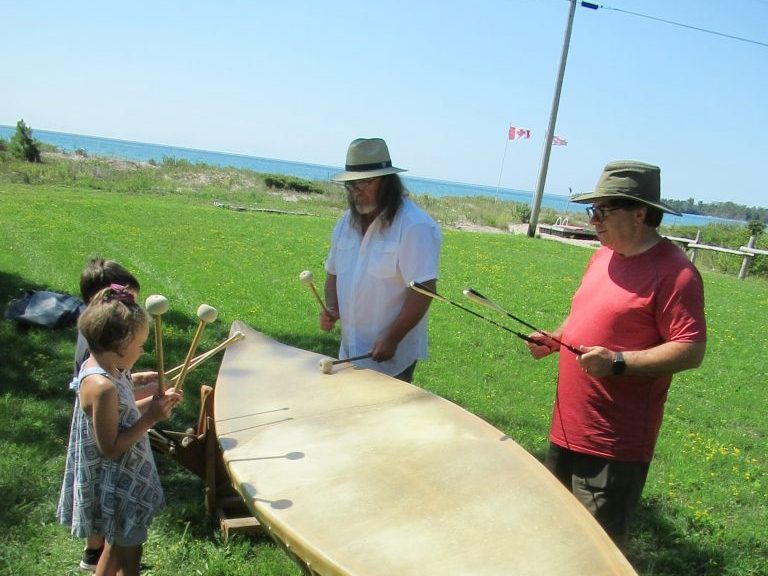 Only at the wonderful Debajehmejig Creation Center in Manitowaning, where another magnificent canoe was already on display (top picture), did we find a venue with some possible indoor showcase potential, but the timing will have to be decided in the future. Over on the far northeastern shore of Wiikwemkoong, in the unceded eastern territory, we saw a new powwow center being built, but as with everywhere in the world, the social culture on the island is awaiting, and actively preparing for, a reawakening.

We hope that our quick visit provided a memory and a harbinger, on a small scale, of the crowded unity of communal joy and the escape offered by the living power of music and rhythm. The absence of that power in our nowadays lives is truly a conundrum.