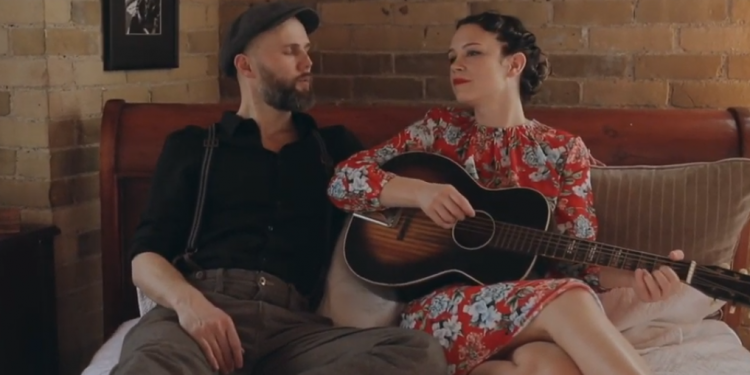 The song came out of a dream. Well, two dreams, actually. Husband and wife duo, Timothy Loeffler and Christina Rieder of Goldschatz both awoke one morning with musical soundtracks in their minds, two different songs, which they melded together to form their latest single, “Darkest Times,” the video for which we’re excited to premiere today here on Roots Music Canada.
Recorded and shot in Toronto in an old B&B in the Distillery District and in the Gladstone Hotel, the duo’s concept for the video is one of robbery – bank robbery to be sure! In order to make it look even more realistic, the half Swiss half Canadian poppy alt-folk duo decided there simply had to be money (and lots of it!) to give the story line some credibility. Turns out buying counterfeit money is illegal in Canada, but not to be deterred, they turned to Russia for help, and Russia came through! Counterfeit money was back in the game!
The entire eight-song record, Salt Of The Sea, was recorded in Toronto with David Gavan Baxter, except for the vocals, which were recorded in Meilen, Switzerland by Christina Rieder.
Check out “Darkest Times” below.
If you are enjoying this content, please take a second to support Roots Music Canada on Patreon!