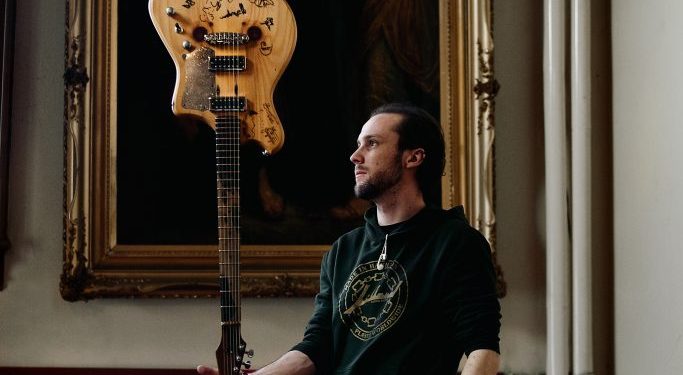 In celebration of Hamilton-based Sonic Unyon Records’ 25th anniversary, Jillard Guitars is building a limited-edition run of 25 guitars made from wood reclaimed from the historic building at 99 James St. North in Hamilton, ON. Built in 1872, the four-story Victorian structure was brought back to life in 2015 through meticulous restoration.

The wood has been sourced from the centuries-old building. Cottage 13 Tattoo, one of its tenants, has provided artwork reminiscent of Hamilton iconography from the late 1800s, a time when Hamilton was dubbed “The Electric City.” This artwork of the “Illuminated Woman” adorns the back of each of the 25 unique guitars. The entire project is a collaboration between Sonic Unyon, Jillard Guitars, Cottage 13, and Birchway Sound, who together have decided to donate all proceeds from the project to Hamilton charity An Instrument For Every Child, which provides instruments and instructors to children from all walks of life.

This project has seen tremendous momentum, with support from various Canadian musicians, including Gordon Lightfoot, Dan Mangan, Bahamas, Walk Off The Earth, Terra Lightfoot, Said The Whale, The Trews, and many more — even being used at the live gala for the 2019 Juno Awards.

This is a chance to be a part of Hamilton history, owning a piece of a building central to Hamilton’s rise as an arts and music city through the influential Sonic Unyon record label. The corner of James Street North and York Boulevard, where 99 North is located, is pivotal to the cultural movement that helped create the Supercrawl festival, Hamilton’s premier annual arts and music event, which takes over James North every September. These guitars represent a special connection to this movement, each one as unique as Hamilton itself.

This unique project is a beautiful blend of music, art, community, and history.

For pricing and ordering, visit https://www.jillardguitars.com/99james

Jay Jillard has spent the last decade honing his skills as a luthier, which has brought Jillard Guitars into the worldwide stage.  It’s now a fully equipped shop that outputs world class instruments for touring musicians, recording studios, and local players. It’s recognized for incorporating unique and natural elements into vintage inspired designs, while also being known for pushing the boundaries of what’s possible in guitar manufacturing.

Birchway Sound is a one-stop source for pro-quality Canadian-made boutique and consignment instrument sales and technical services. Founded in 2010 by Ed Sculthorpe, a Canadian army veteran with over 25 years of engineering craftsmanship and project management, Birchway Sound offers a diverse selection of instruments and equipment expertise. Years of combined experience offers the recording artist access to a wider spectrum of creative possibilities.

Celebrating their 20th anniversary, Cottage 13 remains one of the most reputable tattoo and piercing studios in Hamilton, ON and beyond. Dedicated to providing a superior level of tattoo and piercing services in a clean, comfortable setting, the artists and piercers use only the best quality equipment and products.