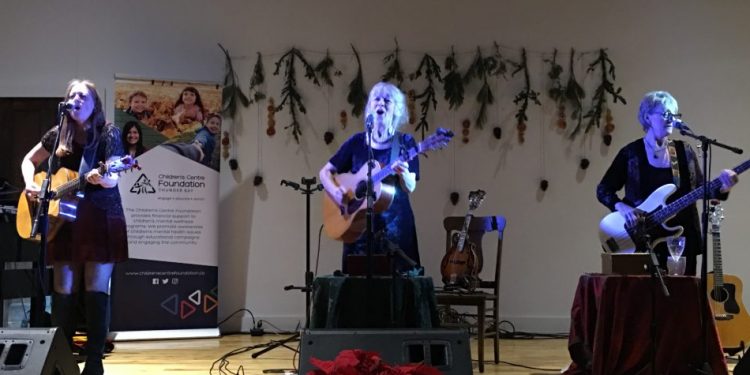 There is something decidedly northern about their sophisticated blend of winter-themed songs, which runs the gamut from holiday carols to jazz and gospel-tinged homages to ice and snow.

How easy it is to imagine them ringing out through a snow-covered boreal forest in winter time.

The word “angelic” gets thrown around a lot these days to describe three-part female harmonies, but to me, it carries a syrupy sweet connotation that would be totally out of place in this context.

Boreal’s harmonies are stunningly beautiful to be sure, but also bold, mature and complex – a fact perhaps best demonstrated by their cover of “Angels We Have Heard On High,” a version both classily restrained and incredibly complicated, making clever use of key changes.  It simply towers above the typical “let’s try to sound like a chorus of angels” treatment given to the song.

On Dec. 8, Boreal performed its repertoire before an audience of 100 or so in Thunder Bay, Ont.’s Urban Abbey, a church space run by an urban ministry devoted to helping address social problems in the city.  (The show was actually a benefit for the Children’s Centre Foundation).

The intimate hall – outfitted with chairs, not pews, and suitably decorated with pine boughs and dried fruit ornaments – was a perfect venue.

Boreal opened the show with an a cappella rendition of the hymn “O Welcome Dear and Lovely May” before launching into a first set that included elegant covers of “In the Bleak Mid Winter” and “Go Tell it on the Mountain” and signature originals from the trio’s sole recording, Winter’s Welcome, including the title track and the gospel-tinged “Gotta Go.”

Throughout the show, the women deftly swapped instruments, taking turns on guitar, bass, mandolin and percussion, while Jude occasionally sat down at the piano for a number.  She also added atmospheric strains of wind chime and bells to “Carol of the Bells” and joined Tannis on glockenspiel for a sprightly rendition of “Suzy Snowflake.”

Tannis payed tribute to hero Joni Mitchell with a reverent cover of “River” that showed off the Joni-esque tones and hues in her own voice, and Katherine closed the set with her rollicking original, “Hallelujah” – not to be mistaken with the Leonard Cohen classic of the same name – which showcased her power and passion as a vocalist.

After an intermission, during which we were treated to free tea and desert squares, the women returned to the stage, opening their second set with a gorgeous rendition of James Gordon’s haunting “Frozen in Frobisher Bay” – a song allegedly written in less than 24 hours when Jane Siberry needed an Arctic-themed song for a Peter Gabriel project.

Jude sang lead on some lovely arrangements of her songs “Angel Song” and “Little Bird,” successfully getting the audience to sing along on the latter number and showing absolutely no audible signs of the cold she told us she was recovering from.  We never would’ve known had she not regaled us with homages to Fishermen’s Friends and advice for middle-aged women on how to sneeze without, uh, “leaking.”

Katherine sang lead vocal on a charming, a cappella cover of “White Christmas” before the trio closed the show with Tannis’ “Hey Hosannah.”

The audience responded with a well-deserved standing ovation before Jude led the women in a gentle encore of “I’ll be Home for Christmas.”