Clay Eals is the author of Steve Goodman: Facing the Music and was a workshop participant at this year’s Mariposa Folk Festival.

Please take a moment to revel in gratitude for the birth of Steve Goodman, 64 years ago today. Would that he had had the opportunity to enjoy this occasion. That we are talking about his life and music nearly 28 years after his untimely death is a tribute to his broad and deep effect on the world.

How to sum it up? “Volcanic,” “unbearably cute,” “the big bang in the little shape,” “a shaman, a mystic” — these are just a few of the phrases others have used to characterize his impact. How would you describe it?

How fortunate my wife, Meg, and I were to experience the July 6-8, 2012, installment of the venerable Mariposa Folk Festival. An amazingly eclectic and talented lineup of musicians made for an entertaining and compelling weekend.

Orillia was the original home of the festival upon its founding in 1961, but by 1973, 1974 and 1978, when Steve Goodman played the festival, it was taking place on Olympic Island in the Toronto Islands, a quick ferry ride from the Toronto waterfront.

The eventual return of the festival to Orillia was a brilliant turn of events, for the intimacy and ownership to be discovered in such a community undertaking is truly inspiring. Not that the festival lacked for big moments, including the surprise appearance on Saturday evening of Gordon Lightfoot to sing two songs on the main stage.

In an event such as Mariposa, however, the juice and sustenance lie in a myriad of small moments — real-time, in-person connections that generate laughter, warmth and bonding. It is that element that I will forever carry in my heart.

Mariposa kindly gave me two showcases for my updated third printing of “Steve Goodman: Facing the Music“: a literary interview and a “Songs of Steve Goodman” workshop. The latter drew an audience of 120 and is depicted in the following photo. Big thanks to Paul Court, Steph Dunn, Mike Hill, James Keelaghan and Rob Lutes for providing stellar music for the workshop.

Big thanks to Mike Hill and the many other organizers and volunteers who made it possible for Meg and I to be a part of 2012 Mariposa. I highly recommend the festival to all of you. 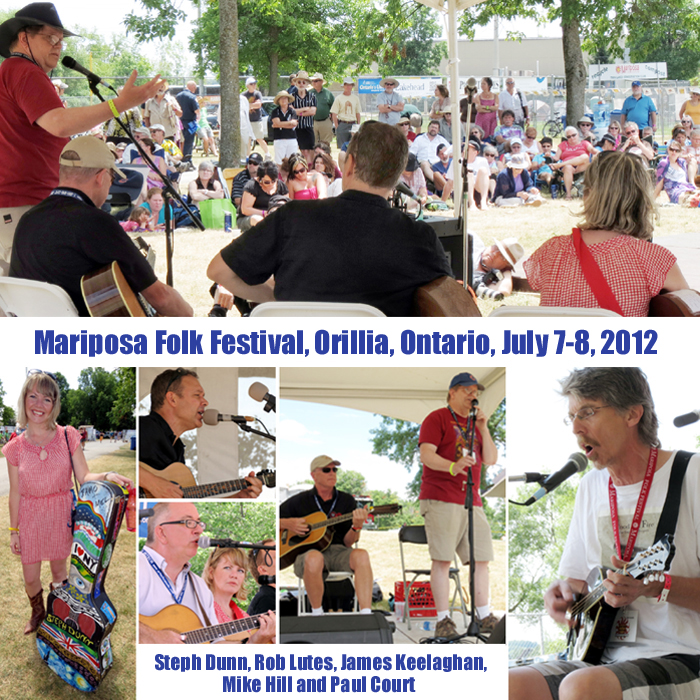