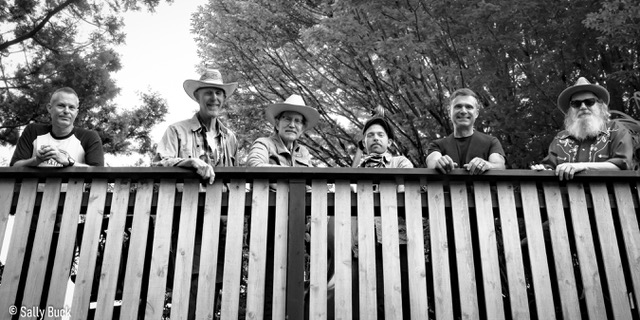 PAUL PIGAT'S BOXCAR CAMPFIRE   Many of Paul Pigat’s fans are probably more familiar with him as the front man of the rockin’ Cousin Harley band. You might think that acoustic music is a new diversion for the already multi-talented Vancouver musician. Not so. His love for this type of music started back in high school when he discovered the genius of Texas singer-songwriter Townes Van Zandt. But not everyone is familiar with this side of Paul … that of emotive singer-songwriter. Originally created as a way of “bringing it down a bit”, Boxcar Campfire has taken on a life of its own as a recording and touring project. It allows a more reflective and insular shade of Pigat’s creativity to come into play. Those with sharp ears will hear snatches of everything from Debussy to Jimmy Rogers blues inflections thrown into the mix, but — as always — the sounds Pigat creates are all his own. With long gone days of railroad steam trailing out back of his head as he sings of possums in the pot and holes in his heart, this music gets you in the mood to hit the open road. Paul’s style is deeply rooted in the playing of Les Paul, Merle Travis, Doc Watson and Mississippi John Hurt, with a modern twist to create a style that is exhilarating in its intensity, at the same time both fluid and precise. His creative use of tone and dynamics is a hallmark of everything he plays. His superb talent as a guitarist is matched by his songwriting and his vocal abilities; a warm baritone equally at home singing flat-out rockers and or laid-back folk songs. THE ROCKET REVELLERS   The Rocket Revellers formed in 2012 in Vancouver B.C. playing weekly to sold out shows in Vancouver’s historic Gastown district at the Revel Room. The dance floor is packed and sounds of western swing, jump blues, gospel and rockabilly Dynamic vocalist Dennis Brock started his roots in hometown San Francisco on the rock scene with Kristine and Skin & Bonz before developing his passion for western swing, rockabilly and jump blues. Lap steel & guitar player Jimmy Roy has recorded and toured with Ray Condo & His Ricochets, Big Sandy & the Fly-Rite Boys, Jimmy Roy’s 5 Star Hillbillies and Petunia & The Vipers to name but a few. Guitar virtuoso and producer Stephen Nikleva's album Square Moon release in 2017 was highly acclaimed. His work with Veda Hille, Sandy Scofield, Sarah McLachlan and many others speak to his talent. Pianist & vocalist Mike Van Eyes is an absolute one-man wrecking crew. He does it all from early jazz to rock 'n' roll, he is a premier boogie-woogie showman. Mike has worked with The Epics, Trespassers, Herald Nix and so many others. Stephen, Jimmy Roy and Mike have been playing and recording in many of the same bands for decades now, and have an incredible chemistry together. Upright Bass player Joseph Lubinsky-Mast is a busy and highly sought after player currently rockin’ for Petunia & The Vipers and Wooden Horsemen. His style and energy are infectious and top notch. Versatile drummer Paul Townsend plays a multitude of styles ranging from western swing, rockabilly, Roma & Middle Eastern. He has toured throughout Europe and played jazz festivals in Montreal, Paris, Calgary and Vancouver.