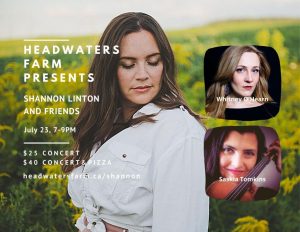 Shannon Linton is a Canadian singer-songwriter, classically trained vocalist, and climate activist who has called Northumberland County home for most of her life.?? She grew up on her family farm in Plainville where she currently lives and raises her family. After narrowly avoiding a career in opera, she rediscovered her passion for popular music and began performing and recording her own songs, first with Northern Hearts (2019 CBC Searchlight Top 100) and now as a solo artist.?? Shannon’s debut EP, In Spite of Everything, will be released Spring 2022. She has invited a dream team – multi-instrumentalist Saskia Tomkins and the velvet-voiced Whitney O’Hearn – to join her for a series of shows across southern Ontario to celebrate the release. You can listen to Shannon’s music at https://shannonlinton.bandcamp.com/ or wherever you stream music and follow her on Instagram or Facebook @shannonlintonmusic. Whitney O’Hearn is a performer, music educator, creative, researcher, and sometimes composer/arranger! They have a background in classical voice and, unlike Shannon, succumbed to an opera career for a time. When not performing in traditional classical music settings, Whitney wrote, produced and performed in independent multi-media theatre productions as a member of the trio Collectif. Whitney can currently be found as a purveyor of rascality on instagram where she and her husband create cosplays of dubious quality with a music history spin ranging from medieval french chanson to Bruce Springsteen. Saskia Tomkins is a master musician of Violin/Fiddle Viola, Cello and Nyckelharpa. She is classically trained with a folk background and a B.A.hons. in Music (Jazz & Popular Music), and she won All Britain Champion Irish Fiddler. Over the years, Saskia has worked with many musicians, including: Jimmy Bowskill, The Chieftains, Kim Doolittle, Tim Edey, Tim Garland, “Jabbour”, Robb Johnson, Sonja Kristina (Curved Air), Ron Korb, James McKenty, Crispian Mills (Kula Shaker), David Newland, Donald Quan, “Sin E” Ted Staunton , “Sultans of String”, Miranda Sykes, “Uriah Heep”, Lotus Wight (Sam Allison), Ken Whiteley, “Al-pha-X” and Astrid Young, her husband Steáfán Hannigan and son Oisín Hannigan, and a plethora of other amazing musicians, actors and dancers! Saskia also teaches privately from her home near Cobourg, Ontario, and runs workshops at festivals.