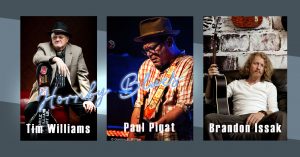 The Hornby Island Blues Workshop takes place every spring on Hornby Island. Each year they invite a dozen or so of the finest Canadian blues and roots musicians around to share their knowledge and inspiration with some lucky students. We thought - why not catch some of these great players, singers and all-round crowd-pleasers, and get them to do a show for us on the way? So, we snagged some of these entertaining entertainers to entertain you just before they head over there . It's a simple but foolproof formula! This is the fourth year that we have presented this delightful showcase. Brandon Isaak This guy lives and breathes the blues. Brandon Isaak is an authentic, heart felt roots and blues songster who always delivers the goods. Be it as his one-man band, his dynamic duo, his hard-hitting trio or even his five piece Saints of Swing all-star group. You always get 100% of this artist. Born in Whitehorse,Yukon to a family who has always been in the music business. His folks owed a couple of blues clubs. His father, Ed Isaak, is a full-time musician and has been his whole life. Young Brandon grew up in a bluesy, artistic and musical atmosphere which shaped his identity and future profession. He backed up many blues masters who would take up a three week residency in his family’s clubs. This is where he learned his chops and cut his teeth and begun the journey to the gritty, soulful player he is today. "Brandon not only plays his guitar but he plays his audience like a ringmaster in his own circus, always looking for new ways to entertain."- Teresa Mallam, Free Press. Paul Pigat What kind of music do you want Paul to play? Blues? Jazz? Gospel? Bluegrass? Punk? Classical? Metal? Rockabilly? Western Swing? Something unique, say Mel Torme meets AC/DC? He could do it, and he could it well, he's that kind of guy. Paul Pigat can play just about every style and technique imaginable, with a modern twist that is both fluid and precise, and is without fail exhilarating in its intensity. Diversity in a musician is always a bonus, but of course at a blues concert Paul will narrow the scope for sure, to focus on his brand of country meets bebop blues and traditional delta finger style. With his rockabilly heart and his hobo soul this self admitted guitaraholic is like a pitbull on a bone when it comes to practicing his craft. “Hot enough to raise sweat on a chunk of granite!” - Monday Magazine. "His lead guitar is stunning and the generous breaks bristle with invention and at times are lightning fast.” - Now Dig This (UK).  Tim Williams Tim Williams is a blues-based singer / songwriter / multi-instrumentalist. He is a 40 year veteran of the roots music scene in North America, roots which stretch back to the coffee-house scene of his native California in the mid 60's. Imagine, if you can, a front porch where Robert Johnson, Hank Williams, Hula Hattie, Flaco Jimenez and Bob Marley meet often and discover just how much they have in common.  Tim's music would fit right in. Settling in Canada in 1970, Tim is a studio musician, producer, and a performer in constant demand. He has played folk / blues / jazz festivals and concert halls and clubs from Halifax, to Vancouver Island, to the Yukon. Inspired by the hillbilly and western swing music he heard as a child, Tim absorbed late fifties rhythm & blues and rock & roll, Hawaiian and Mexican music, early sixties folk and bluegrass “like a sponge” before discovering a passion for traditional blues styles which was fueled by seeing many first generation blues musicians live during the blues boom of the mid and late Sixties.