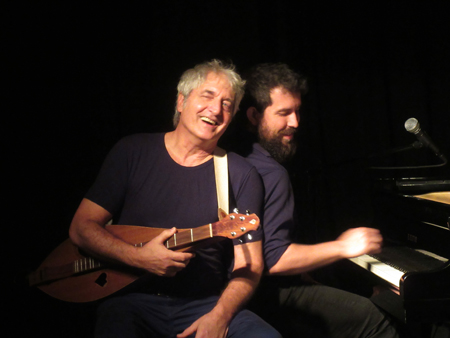 Roots & Grooves Veteran dulcimer maverick and young keyboard ace join forces for an intergenerational smorgasbord of roots, rhythm and groove! What do you get when you combine a famed folkie with a rising star seasoned expertise and youthful exuberance old school groove with Broadway chops? Rick Scott and Nico Rhodes blur all boundaries. In a word, (well okay - two words) they cook! Rick Scott emerged in the ‘70s in the iconic folk trio Pied Pumkin. Since then he has released 18 recordings and performed his highly original music in nine countries, earning three Juno nominations and Vancouver Island, Western Canadian and Canadian Folk Music Awards. Singer, songwriter, actor and raconteur, he is legendary for his capacity to combine music and humour to uplift and refresh the human spirit. Nico Rhodes is astonishing, not just an accompanist, you have to hear and see him caress, cajole and at times almost punish the piano. Breathtakingly fresh sounds and style radiate from this young musician whose hands effortlessly fly across a keyboard leaving us in utter amazement and jumping to our feet at the end of a solo! At age 8 Nico wrote Rick a fan letter and at age 23 he orchestrated Rick’s music for symphony. Equally proficient on keyboards and woodwinds, he’s in constant demand across Canada as an arranger and musical director for stage shows from Chemainus to Ontario, when not playing jazz with his own trio or touring with renowned chanteuse Joelle Rabu. Tower of Song Leonard Cohen's 'Tower of Song' is a metaphor for the inspiration that flows between songwriters, each toiling away on their own, but connected by their shared craft. Moved by this concept, celebrated BC singer-songwriters Oliver Swain and Glenna Garramone collaborated to produce a project that is a dialogue through song and a tribute to the legendary songwriter. Re-imagining both rare and classic works of Cohen, the duo have crafted a sound that resonates with both longtime Cohen fans and a younger audience. They collaborate with a rotating cast of players and singers. Tower of Song began as a one-off tribute night for a packed house at Vancouver's Media Club in 2011, and has since grown into an actively touring folk duo. Produced by Garramone, she invited fellow Victoria musician Oliver Swain, and the show gave Swain and Garramone the chance to grow their musical chemistry. Together have arranged some of Cohen's timeless songs beautifully, for two voices, banjo, string bass, piano and guitar. Tower of Song have played over 90 concerts to thousands of people in theatres and folks clubs across Canada, touring in support of their debut album. "The tunes are hauntingly lovely. Wonderful takes with close harmonies and violent re-rhythmings. Musically sound. Faithful by being strongly, creatively Cohen, and yet wholly their own." - James N. Porter, Professor Emeritus (Arts), York University.   Glenna Garramone is inspired by the geography and spirit of the places she has lived, from Nunavut to Hawaii. She harmonizes the experimental with the classical, and the unexpected with the organic. She crafts "raw, emotional, and utterly captivating" songs (John Threlfall, Monday Magazine), using anything from piano, to guitar, to her tap shoes. Glenna's talent and creativity have won her invitations to a wide variety of venues; Victoria's Folk Fest, BC Festival of the Arts, and the Victoria Independent Music Awards. When she's not traveling, Glenna resides in Victoria, where she directs The Pandora Chorus, an indie-pop-rock community choir. She is also the keyboard player of the band Shane Koyczan and the Short Story Long. Oliver Swain is a Juno & WCMA nominated Americana folk noir musician who has spent a dozen years in some of North America's most loved roots bands (Outlaw Social, The Duhks, The Bills) He went solo and released In a Big Machine in 2011 to rave reviews, #1 spots on the charts, sold out shows and festival appearances across western Canada. A naturalist musician who was drawn to Louisiana and Appalachia several times to discover the roots of American music for himself, Oliver resides in Victoria, BC. Performing on banjo and string bass, led by tremendous vocal abilities, Oliver's live show has attracted a lot of attention over the years including that of Tamara Kater, Executive Director of Folk Music Canada: "Since I first discovered him in 2008, Oliver Swain has been one of my very favorite artists ... an evening spent with Oliver Swain will leave you breathless and joyful."