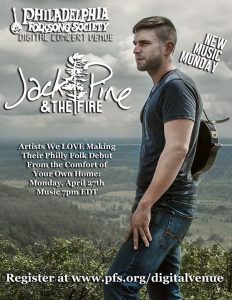 Grab access here: https://folksongsociety.wufoo.com/forms/pfs-presents-jack-pine-427-at-7pm-edt/ Having trouble? Try Paypal BUT MAKE SURE TO SELECT Jack Pine FROM THE DROP DOWN: https://www.paypal.com/donate/?token=0QYorMcQJt259aF9REDpwO2fMu5YtK5tjRmV7XF7hQncFR9cJGk5oqIRIgERqZKNbPxHxG&fromUL=true&country.x=US&locale.x=en_US PFS Presents Jack Pine - 4/27 at 7pm EDT Due to the constantly changing reality surrounding the global health crisis of COVID-19, the FIRST priority of the Society is the health and well-being of our community. Following the wild success of its first livestream with Mari Black on March 13, 2020, the Society has worked to to keep the music playing, lift spirits, and make sure the artists in our extended Folk Family can continue to live day to day. We all know music is a universal language and we will be utilizing it as we present artists local, regional, and international - old favorites and new discoveries - to a digital audience of music lovers from the comfort of their own homes! PFS is excited to bring you #NewMusicMonday each week with artists we LOVE making their Philly Folk debuts! Juno nominee Jack Pine's incredible songwriting and engaging stage presence made him a standout at the Folk Music Ontario conference and we've been hoping to present him ever since - and now is our chance! With tours and gigs cancelled and income lost, this is the time to support the musicians we love and #KeepTheMusicPlaying About Jack Pine Jack Pine takes his name from that of a ragged little tree who's shape was made famous in a Tom Thompson painting of the same name. He chose this name not for the tree's fame or imperfect figure, but because it's a tree who's seeds may only be sown by the intense heat of a devastating forest fire. It is a namesake who's fated destruction and rebirth is one of many inspirations that lead him to perform acoustic folk music, writing original songs that point to the beauty within the wreck, and the heart within the wretch. Jack Pine (Ottawa Singer/Songwriter/Producer Gareth Auden-Hole) grew up with his head in the city and his heart in the northern wild. Enthralled with music, from a very young age he fed his ears a steady diet of Toms and just about anything else he could get his hands on. It was not until adulthood that he began writing music of his own, and years later still before he took the name of a tree. By then he'd finished a degree, hitchhiked across his Canadian homeland, played in a handful of bands, and studied music production in Victoria, Ottawa, and London. It was 2011 before work finally began on what would become a self-titled debut album as Jack Pine and The Fire. Jack Pine and The Fire presented a rollicking alternative folk/country sound that breathed new life in to the traditional american folk music that Jack had grown to love. His unique rhythmic mandolin style played counter beats to the rhythm of acoustic guitars , dobro , fiddle , upright bass , and drum kit that made up the record's backing band. On paper, the band quite intentionally looked like an old time string band and indeed they were very familiar with the traditional americana styles. But Jack Pine and The Fire did their best to play harder, faster, and more dynamically than they would ever hear on a typical Alan Lomax recording. The resulting album was released independently and lauded as "frantic", "gritty", and "one of the most rocking folk albums" while receiving just as many comparisons to Mumford and Sons and The Lumineers as to the Bluegrass and Trad musics that influenced it. By the end of 2012 it had become the most played album on CKCU while charting repeatedly on CHUO and community radio stations across Canada. A top 10 best seller at Ottawa's Compact Music (the only local artist on the list at #7), the strength of their new album and stage show propelled them to performance invites from Ottawa Bluesfest, Ottawa JazzFest, Burlington Sound of Music Festival, NXNE, CMW, OCFF/FMO and eventually a four month 2013 residency at Ottawa's legendary Irene's Pub. Within a year of the launch of Jack Pine and The Fire, the band had also released a mustache themed charity single benefiting the Movember Foundation for Male Mental Health and Cancer Research. With the help of it's official music video, Moustache is King became a popular anthem for the foundation's Movember campaign. Through the strength of the song, it's fundraising campaign, and Jack Pine's Movember Mo-down events, the band ultimately succeeded in raising thousands in donations for rarely discussed male health issues. More recently, as the band takes time to focus on their long awaited second album, Jack Pine has taken to wandering away from the warm comfort of The Fire …a 'lone wolf ' is born. In September 2015, Jack Pine released his solo Lone Wolf EP, a delightfully raw, live-off-the-floor recording that makes full use of the ambient acoustics of the stone chapel in which it was recorded. It's 4 songs, intended as a companion piece to the as yet unreleased sophomore band full-length, feature Jack's empathy for the underdog, deep-seated respect for nature, and wry sense of humour, as well as his mandolin... playing very furiously, then very softly. DUE TO THE SUCCESS OF PFS' FIRST LIVESTREAM, THE METHOD THAT WE CAN SUCCESSFULLY USE FOR THIS EVENT IS STREAMING LIVE IN A PRIVATE FACEBOOK GROUP. YOU MUST HAVE FACEBOOK ACCESS TO PARTAKE IN THIS LIVESTREAM. YOU WILL BE SENT THE ADDRESS TO JOIN THE GROUP IN THE CONFIRMATION AND WE WILL ONLY APPROVE YOU IF YOUR FACEBOOK NAME MATCHES WHAT YOU SUBMITTED ON THE FORM, SO BE CAREFUL WHEN FILLING IT OUT PLEASE. WE APOLOGIZE FOR ANY INCONVENIENCE THAT THIS MAY CAUSE. We thank you so much for your support and understanding in a time of so much uncertainty. Sending much love to our entire extended folk family. Stay well.