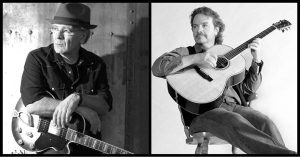 Ray Bonneville (ON/TX) Often called a “song and groove man,” Bonneville has lived the life of the itinerant artist. He’s an acclaimed raconteur and strips his bluesy Americana down to its essentials, then steeps it in the humid grooves of the South, creating a compelling poetry of hard living and deep feeling. “Ray Bonneville can be counted upon to deliver albums of uncluttered, lyric-driven blues.” Donald Teplyske, Fervor Coulee Jack Semple (SK) An absolute virtuoso, Juno and Western Canadian Music Award winner, Jack is one of those rare guitar players who leaves a crowd speechless. He is also a fabulous singer. Listening to and watching Jack play fills one with a sense of having witnessed an event in time, one not soon to be forgotten. 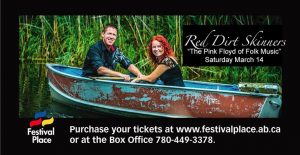 Qualico CAFE Series presents Red Dirt Skinners Described by Roots Music Canada as "The Pink Floyd of Folk Music" the Red Dirt Skinners are the multi-award winning, multi-instrumentalist husband and wife team of Rob and Sarah Skinner. The first act in history to achieve accolades at both the British Blues and British Country Awards, the duo's unique sound also won them folk/roots album of the year in several polls across the UK and North America and saw them nominated "duo of the year" at the International Acoustic Music Awards. If you like songs influenced by Pink Floyd, Simon and Garfunkel, Supertramp, Crosby Stills and Nash, David Bowie coupled with some epic storytelling, humor and heartfelt emotions, you'll love a Red Dirt Skinners concert. Sale Dates and Times: Public Onsale : Thu, 25 Jul 2019 at 10:00 AM 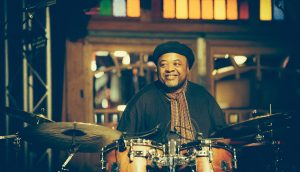