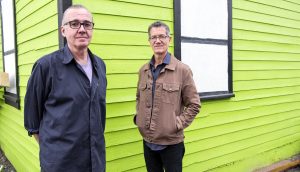 Sunday, February 23, 2020 Jim Beard and Jon Herington of Steely Dan $75 Advance / $80 Door Doors: 6:00pm Performance: 8:30pm It’s only natural that pianist Jim Beard and guitarist Jon Herington would strike the kind of special accord heard throughout this intimate duo encounter in their latest release, Chunks and Chairknobs. They’ve shared countless hours in the studio over the years playing on each other’s albums, beginning with Beard’s 1990 debut “Song of the Sun” and continuing through to Herington’s 2016 album “Adult Entertainment”. They’ve worked together as sidemen on recordings by bassist Victor Bailey, saxophonists Bill Evans and Bob Berg, drummer Dennis Chambers and brothers Michael and Randy Brecker. And they’ve shared the bandstand on tour with Steely Dan for the past several years — 20 for Herington, 11 for Beard. “There are many, many records and gigs and times of our lives,” said Herington, reflecting back on their musical partnership. “Not only that, we’ve been sharing a studio ever since we got to New York, which is probably since 1987.” At the time of this latest recording, Beard and Herington had just come off a three week residency with Steely Dan at the Venetian in Las Vegas, so their Dan chops were polished to a bright sheen. But they were also basking in the after-glow of having recently recorded this superb duet album. And though guitar and piano are not generally regarded as ideal mates in a duo setting, the two kindred spirits found a way to seamlessly blend in the studio, divvying up duties on eight tunes, easily alternating roles, comping for each other while delivering melodic gems and brilliant solos along the way. “Not all of that happened right away spontaneously,” Beard pointed out. “We did have to think about who could do what where, because it’s not the most natural duo instrumentation. It’s so much different than if it were piano and bass or guitar and bass, piano and saxophone or guitar and saxophone. Because the two instruments are so similar in the way they function and behave in a group, particularly the chordal aspect of it. So it did take a little bit of think-time to figure out what would be best.” “It’s two instruments that do not necessarily cooperate too well,” added Herington. “And because the role of each instrument is similar, it kind of presents a real problem — Who’s going to play the bass part? Who’s going to keep time? So we had to hunt for different tunes and figure out what we could do to them to make them work. And it took quite a while.” In the dead of winter at Hugh’s Room Live, Jim Beard and Jon Herington of Steely Dan presents an eclectic evening of instrumental music performed on guitar and piano in celebration of their latest release, Chunks and Chairknobs. Join us for the magic. Tickets available right now. website: http://www.jonherington.com/ youtube: https://www.youtube.com/watch?v=euklbIfq414 * Advertised pricing excludes taxes and fees.