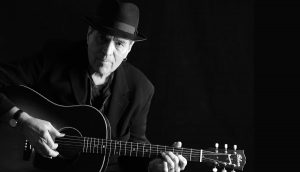 Tuesday, January 14, 2020 | 8:30PM Eric Andersen and Eric Lee Advance $30.00 / Door $35.00 * Eric Andersen Eric Andersen, one of the founding fathers of the great American Folk Family, continues to evolve and reinvent himself.  It’s as though he has an unquenchable thirst to create new works and adapt the works of other literary icons of the past. For me that is the mark of a true artist, constantly moving the finish line and looking for new ways to express himself and not fearful of taking the great works of others and translating them into song in his own undeniable fashion. “Andersen is the most elegant of singers.” – Rolling Stone “A singer and songwriter of the first rank.” – The New York Times “Eric Andersen is a great ballad singer and writer.” – Bob Dylan   Eric Lee “In this brave new world of song, Eric Lee sings and write gems of truth with a new kind of language…” – Eric Andersen A Pennsylvania-born songwriter and multi-instrumentalist, Eric Lee shapes songs with stand-alone melodies and rich musical backdrops. From the personal to the sublime, they range from tales of honkeytonk heartache to anthems of social consciousness, and are told with a language of poetic and raw honesty. Lee draws from a well of uncommon musical depth, having worked professionally in recording studios, festival stages, and on the road with acclaimed artists in both folk and bluegrass (The Kennedys, Eric Andersen, Peter Rowan) from an early age. His first full-length album, Heartache Town, featuring vocalist Tracy Grammer and multiple IBMA mandolinist-of-the-year winner Jesse Brock, placed at #26 on National Folk Radio Charts, with the track “The Garden” reaching #25 most-played song in 2019. The album displays a vast sonic landscape, a testament to Lee’s heightened musicality. David Sokol (former editor in chief at New Country Magazine) writes that Eric Lee “…is a musician’s musician and a songwriter’s songwriter, who can write catchy, lyric-rich songs with as much ease as he can lovingly interpret the essence of bluegrass icons Jimmy Martin or Bill Monroe. He’s a Natural, a purist, and a romantic in a world where those qualities are becoming more and more elusive. And with Heartache Town, has crafted a truly engaging album that promises to stand the test of time while revealing new beauty and essence with every listen.” – Since the release of Heartache Town, Lee has performed internationally, having supported acts that include Lorrie Morgan, The Gibson Brothers, Della Mae, Yarn, Frank Solivan & the Dirty Kitchen, and The Quebe Sisters, and is quickly becoming a powerful new voice in Americana and acoustic music. His solo performances are intimate and insightful and charged with wit and musical prowess. Occasionally, he performs with a full electric band (Eric Lee & Co.), bringing a raucous musical energy infused with country twang and a bluegrass backbone. Additionally, he tours with Eric Andersen and as a member of Man About A Horse, and continues to work as an instructor and session musician. He currently is based in Western Massachusetts.   * Advertised pricing excludes taxes and fees.