Sammy Miller and The Congregation 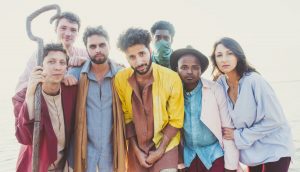 Monday, January 13, 2020 | 8:30PM Sammy Miller and The Congregation Advance $20.00 / Door $25.00 * Sammy Miller and The Congregation are on a mission, crisscrossing the country like a vaudevillian revival show with evangelic fervor for music. The seven-piece band is pulling people out of their solitary lives and putting them in the moment with a bracing dose of joyful jazz performed with infectious theatricality. The New York City-based, familial collective has captured its frenetic energy and unflinchingly optimistic songwriting on its debut album, Leaving Egypt. “We want to get people back in a room together,” Sammy Miller says. “I love the idea of being unhinged, sincere, vulnerable, and breaking down walls through humor. Music is an uplifting gift, and I want to be generous in sharing it with people.” Sammy Miller and The Congregation has been described as a mashup of the sensibilities of Ben Folds and the Preservation Hall Jazz Band. The band freely mixes vocal and instrumental tracks live and on record, asking the audience to go along for the ride with the lead melody being carried by vocalists half the time, and instruments the other half. The seven-piece group is a community of adventurous and charismatic superstar musicians who are conservatory-trained but who have not lost their childlike wonder and awe for playing music. The band lineup is Sammy Miller, drums and vocals; Sam Crittenden, trombone; Ben Flocks, tenor sax; Sammy’s sister Molly Miller on guitar; Alphonso Horne, trumpet; Corbin Jones, bass and tuba; and David Linard, piano. Independently, the band members have performed and recorded with notable artists including Wynton Marsalis, Lady Gaga, Jason Mraz, and Beyoncé. Sammy convened the band in 2014, and 2015, he earned a Grammy Award nomination for his work as a drummer with Joey Alexander. Since the band’s inception, the Congregation has played nonstop around the world. Select highlights include performances at Umbria Jazz Festival, Monterey Jazz Festival, Jazz At Lincoln Center, The White House, The Kennedy Center, Prokofiev Concert Hall in Russia, and at the Newport Jazz Festival where the group received a standing ovation. The seven-piece band has also garnered prime critical acclaim from such venerated outlets as Los Angeles Times, Wall Street Journal, SF Weekly, Vanity Fair and Jazz Journal, among other publications. In addition to these accolades and accomplishments, the award-winning theatre incubator Ars Nova selected The Congregation for the “Makers Lab” to develop their genre-bending show, Great Awakening. Sammy Miller and the Congregation have also done an exuberant TEDx video illustrating their philosophy on jazz and showcasing their irresistible theatricality and musicality. Sammy started playing drums at age five in a group with his five siblings. “After school we would teach ourselves rock songs, disco songs, and country songs — ”everything was fair game” he recalls. When he got a little older, he discovered an all-consuming love of comedy and jazz. As a kid, he’d go to the library and check out 30 CDs a time, alphabetically exploring the jazz section from Ahmad Jamal to Zoot Sims. He also became obsessed with comedians such as Chris Rock, Lenny Bruce, and Bobby Slayton. “I’ve always loved the risktakers in entertainment — the people who would rather get it real than right,” Sammy shares. Starting his career at an improbably young age, Sammy was cast on Mad TV at 11 years of age. At 18, Sammy moved from LA to New York City; at 21 he started studying for his master’s in jazz at Juilliard. “When I was at Juilliard, I realized jazz couldn’t just live in a conservatory vacuum. It needed to provide its initial function of being an expansive creative outlet where the rules are there for you to break and improvisation went beyond notes and into an experience,” Sammy says. He soon found a cadre of jazz students who felt similarly — outliers who were fiercely individual on their instruments, but also craved a manner of expression beyond the solo. “We all went to Juilliard and have these credentials, but we didn’t like the insular feeling of the jazz scene. We were seeking warmth and connection,” Sammy says. These misfit creatives descended on venues around NYC where the genre was not played. “I wanted to find a new audience,” Sammy says. “We played in dive bars where people were scared of jazz.” Their live show grew to be something of a mix between a comedy troupe and a dazzling rock band that played a vigorously reimagined strain of jazz. “We let ourselves be free on the bandstand and we took the audience with us,” Sammy says. The band’s boundless energy, inclusive ideals, catchy songwriting, and revue style presentation made them a word-of-mouth buzz band. The septet expanded its reach through adopting the rock band philosophy of touring endlessly in a van to build a fanbase. The Congregation’s 9-song debut album, Leaving Egypt, opens with the lone drum figure of “Searching For Ragtime.” Here, the music is stripped down to its essentials, its heartbeat. The journey from there spans rollicking gospel-tinged jazz, rowdy and funky New Orleans second-line music, smoky back alley blues-jazz, and stately balladry. The album concludes bookended with a tender solo piano track “When I’m Gone”. Select album standouts include the singles “Shine,” “Date A Jew,” “Bluebird,” and “It Gets Better.” The track “Shine” boasts Sammy’s ingratiating vocals, undeniably uplifting lyrics, playful piano hooks, and an imaginative arrangement with dynamic horn and backup vocal-driven crescendos. Sammy sweetly tucks in some purposeful messaging in “Date A Jew.” This is a simmering narrative track that showcases the Congregation’s groove pocket and its subtle musical interplay. The balmy “Bluebird” exudes a Paul Simon-imbued folk elegance. “It Gets Better” bursts forth with a loping groove, and cleverly unfolds with moody passages that veer into the sunny side of the street. Leaving Egypt was cut in four 16-hour days at the legendary United Studios where the many famed Count Basie sides were tracked. The band enlisted drummer extraordinaire Jay Bellerose (Alison Krauss, Ray LaMontagne, Robert Plant, B.B. King) to supervise and produce the proceedings. […]