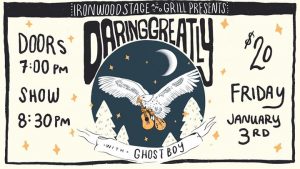 Daring Greatly returns to the Ironwood Stage & Grill in Calgary, AB Friday, January 3rd, 2020. 7pm Doors | 8:30pm Show | All Ages GhostBoy to open the show. Show price is $20, and will be added to your bill at the end of your evening. Call (403) 269-5581 to make a reservation. **If you have already made a reservation; please note that they will hold your reservations for 15 minutes after the scheduled time. For sold out shows, they are unable to guarantee your reservations after that time. - - - - - - Daring Greatly an independent, self-managed Heartland Rock & Soul band, known for its mesmerizing “blood harmonies,” is comprised of a father and his two sons, and 2 best friends who formed in Calgary, Canada in 2015. This tight-knit group is influenced by the spiritual and soul-lifting sounds of 60’s and 70’s Rock music, combining simple lyrical and universal messages of truth, love, purpose, and connection—evident through their 2 albums, 'Cornerstones' (2016) and 'Works of Art' (2017). Their music has captivated audiences of all ages, across borders and boundaries, offering a plethora of stunningly soul-full original songs, as well as a broad repertoire of cover songs for a widely-entertaining, lively, and memorable performance. WATCH/LISTEN: Youtube - https://bit.ly/2xlpVct Spotify - https://spoti.fi/2XJXMuM "Give Myself to the World," Daring Greatly's first single from their third-coming album by the same name, is an anthemic original work showcasing not only their powerful harmonies and compelling instrumental synergies, but their own personal commitment to serve a purpose greater than the individual, and inspire their audiences to reach their energetic highest. "Give Myself to the World" is now available on Spotify, Apple Music / iTunes, Deezer, CD Baby and more!! Listen here: http://bit.ly/GMTTW-1 View the full #GiveMyselfToTheWorldTour schedule at www.daring-greatly.com - - - - - GhostBoy is the official new group of former PEAR frontman, Denis Dufresne. Country/Roots/Acoustic Music at the highest calibre. Denis Dufresne and Aaron Young (2 multiple award winning session and live players), YYC Group of The Year 2019, met at 19 years old and had toured the world before the age of 22. They are putting their superb playing, vocals and songwriting abilities together as Ghostboy. As country as The Eagles and as Rock as Blue Rodeo. They were part of “The Hottest Fiddle Show in the World” as dubbed by the Walt Disney Corporation. www.ghostboymusic.com/ 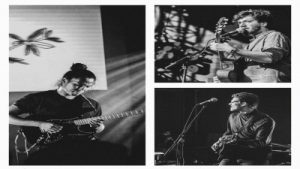 What more could you ask for? On Friday, January 3rd, join us for an evening of pure Gatineau-Style Indie Music with Van Hoan, Double Magnum & Okies. 10$ at the door, but tickets can also be purchased on the Black Sheep Website linked above! Doors at 8:30pm.