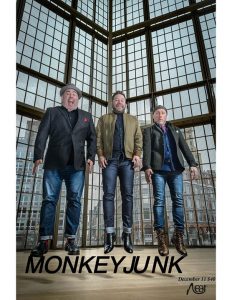 We are stoked to announce a second show has been added for MonkeyJunk at Neat Coffee Shop December 11th, come check out the amazing blues rock from these Juno winners!! Tickets on sale today, limited dinner reservations available before the show. Check them out! https://www.youtube.com/watch?v=15NORNp-hjg https://www.youtube.com/watch?v=XLhqeOit5c4 https://www.youtube.com/watch?v=MQG2-JnNd8A MONKEYJUNK Ace Canadian Blues-Rockers MonkeyJunk Celebrate 10 Years With Thrilling #MJ10 Tour The trio, whose career-best fifth album Time To Roll recently netted their second Juno Award, prepares to travel from east to west this spring and summer, visiting key venues and festivals in between… By almost any ordinary metric, like a marriage or a job, 10 years is a respectable milestone. For a hard-touring and recording band, however, a decade is a sweat-soaked, anecdote-amassing feat. Appropriately, the corresponding anniversary gift is way better something made of tin. Ottawa’s ace swamp roots-rockers MonkeyJunk — fêting 10 triumphant years together in 2018 — are preparing to lift lids from Saskatoon to Sault Ste Marie, Thunder Bay to Nanaimo, as they hit the highway supporting their scorching, career-best Time To Roll album. Audiences will be dazzled. Winner of 2018’s Blues Album of the Year Juno Award (their second overall), the latest and fifth release from singer/guitarist and harp player Steve Marriner, drummer Matt Sobb, and guitarist Tony D is precisely the kind of corker you’d expect from a trio of musical veterans who, between them, have boosted luminaries from Fabulous Thunderbird Kim Wilson to Buddy Guy, the late Jeff Healey to the lamented Stevie Ray Vaughan. Bluesmen don’t come more accomplished than the dudes in MonkeyJunk. But don’t take our word for it. Check out one of the band’s thrilling live gigs this spring and summer as part of #MJ10 Tour. Click here or scroll down for a full tour itinerary (http://monkeyjunkband.com/tour). “What an amazing journey we’ve enjoyed together,” Marriner enthuses. “This little band that could has travelled the world and brought our music to a dozen countries. It’s hard to believe 10 years has passed already. What fun! We’ve had the privilege to visit nearly every corner of Canada and perform our tunes for so many amazing people. It’s been an honour to share this adventure with two of my best friends.” Launched in Ottawa in 2008, MonkeyJunk —handle inspired by delta blues great Son House, who once intoned, “I’m talking about the blues, I ain’t talking ’bout no monkeyjunk!” — have consistently updated contemporary blues with a blistering mix of chops, soul, grit, humour and harmony. MonkeyJunk plays for keeps, as evidenced by the 10 electrifying tracks on their latest album, their first ever to feature bass guitar. “We wanted to push ourselves to work hard and to work efficiently and focused — to see what we could come up with in a shorter period of time,” drummer Sobb explains of Time To Roll. “The result is a brash, groovy-as-always collection of songs that show where the band has been and where we have arrived in many years of writing, recording, and touring.” In addition to the above-mentioned pair of Juno Award wins (out of three nominations), MonkeyJunk has also netted an impressive 21 Maple Blues Awards, two Canadian Independent Music Awards, and a Blues Music Award (USA) for Best New Artist, for 2009’s sizzling Tiger In Your Tank. And while that recognition is swell, all band members agree that the real thrill of playing in MonkeyJunk is just that — playing, especially live, where the music’s ecstatic sway on crowds is right there to behold. Tony D, says, “Tempus fugit, as they say when you’re having fun. Has it really been 10 years? It still feels like the 1st time when ever we hit the stage. What I dig about our sound is how it has evolved from our love of the blues, which brought us together in the 1st place, 10 years ago. That’s one of the unique things about MJ, where we’re respecting the traditions of all roots music and giving it a modern approach.” MonkeyJunk’s 10th Anniversary #MJ10 Tour launches May 3 at Ottawa’s National Arts Centre, wrapping July 28 at Ribfest in Perth, ON. The tour features 31 shows in 25 cities, including a coveted three-night stand at RBC Ottawa Bluesfest opposite Dave Matthews Band, Foo Fighters, Bryan Adams, and Sturgill Simpson. More dates are TBC. “We are so proud of MonkeyJunk’s history of creating (mostly) original music,” Sobb says. “We’ve made five albums in 10 years and it has been a unique honour and pleasure that they are all released on Stony Plain/Warner Canada. What a great ride it has been!” Adds Marriner, “MonkeyJunk is very proud to be part of the Canadian blues community. It is rich and deep and sprawls from east to west. There are incredible singers and musicians in every corner of this country who have their own style and identity and who write compelling, relevant music. We look forward to catching up with them all on our upcoming #MJ10 tour.” 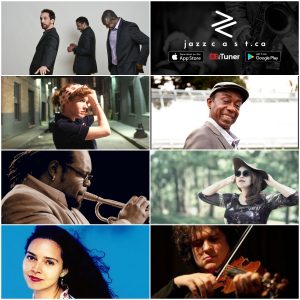 Wednesday, December 11, 2019 | 8:30PM Jazzcast n’ Joy Featuring Alexis Baro, Jay Douglas, Drew Jurecka, Alex Pangman, Denielle Bassels, Eliana Cuevas and Jeremy Ledbetter Trio as Musical Director Advance $20.00 / Door $25.00 *   Alexis Baro JUNO nominated trumpet player Alexis Baro was born into a musical family in Havana, Cuba. Classically trained, he took up the trumpet at the age of age 8 and completed his musical education receiving a teaching certification at the prestigious Amadeo Roldán Music Conservatory in Havana.  He moved to Canada in 2001 and has been wowing Canadian jazz fans ever since. Jeremy Ledbetter An engaging and fiery performer whose music knows no boundaries, Canadian pianist Jeremy Ledbetter has made a career from travelling the far-flung corners of the globe in search of the most fascinating and unique musical ideas out there, then seamlessly integrating them into his work as a pianist, composer, and producer. Alex Pangman Proudly known as ‘Canada’s Sweetheart of Swing’, Juno Nominee Alex Pangman’s natural vocal abilities and deep appreciation for the classic jazz era have earned her a place in our nation’s heart.  Alex is also a host on Jazzcast.ca with her show Swing Set. Eliana Cuevas Eliana Cuevas has grown into an accomplished singer-songwriter and bandleader with unlimited colours in her compositional and lyrical palette. Among her honours are the National Jazz Award for Latin Jazz Artist of the Year (2009), a nomination for Best World Music Solo Artist at the Canadian Folk Music Awards (2008) and a Toronto Independent Music Award for Best World Music Artist (2007). Drew Jurecka Drew Jurecka is a Toronto-based accomplished violinist who is comfortable in many genres. He has spent the last ten years playing jazz, pop, rock and other contemporary styles in Toronto. Though violin is his primary instrument, he also works frequently as a performer and recording sideman on viola, saxophone, clarinet and mandolin. Denielle Bassels Denielle Bassels is a rising star on the Canada jazz scene.  Her whimsical brand of music is a caravan of jazz manouche, blues, folk, with a tinge of pop, all wrapped in an innovative and scintillating package. Already an award-winning artist for the song “Cool Cool Water” from her 2017 album What About Wool Wishbags, Bassels garnered the Grand Prize in the prestigious John Lennon Songwriting Competition, for Jazz. Jay Douglas Jay Douglas first took to the stage in Montego Bay, Jamaica many years ago as youth. With over 45 years of showmanship, he has developed a wide-ranging repertoire of American blues, West Indian rhythms, jazz standards, fancy footwork, and plenty of stage charisma and is a two-time Juno nominee.   *Advertised pricing excludes taxes and ticketing fees.