Ian Foster and Nancy Hynes “A Week In December” 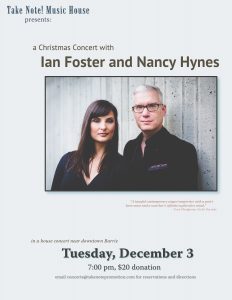 The Take Note! Music House presents Newfoundland performers Ian Foster and Nancy Hynes in their seasonal concert “A Week in December”, on Tuesday, December 3 at 7:00 pm (doors open at 6:30). Requested donation is $20, with all proceeds going directly to the artists. You may reserve your seat by emailing concerts@takenotepromotion.com or calling 705-305-1687 (yes, the phone is working again – it’s a Christmas miracle!). The address is given upon reservation – downtown Barrie, near the courthouse. Ian Foster, native of Newfoundland, is a storyteller. That music is the way he tells those stories only makes the telling richer still. Modern folk wrapped in Canadiana, Ian’s writing style belies a love of history, home and the humble tale. Last year, he teamed up with his long time partner in life and song, Nancy Hynes, to release “A Week in December” – a seasonal album. Nancy’s voice can be heard on most of Ian’s catalogue, as well as countless albums from NL, where she lends and blends her voice with some of the province’s best singers. Ian Foster (www.ianfoster.ca) “A fine example of what a 21st century folk performer should be doing.” Ian Foster’s story- and character-driven lyrics mix with a modern sensibility. Often likened to Canadian songwriting icon Bruce Cockburn in both writing and guitar style, and to artists like Daniel Lanois for his atmospheric approach to sound, Ian’s music has been described as thoughtful, introspective, cinematic, hopeful, and cathartic by critics and fans alike. He has numerous awards and nominations to his credit, including SOCAN Songwriter of the year nominations, multiple East Coast Music Association and MusicNL awards nominations, and a finalist with the International Songwriting competition. Amongst his many co-writing credits is a song with the legendary Canadian folk artist Ron Hynes (who appeared here in one of his final performances in 2015). “A tasteful contemporary singer/songwriter with a poet’s keen sense and a searcher’s infinite explorative mind.” Since Ian’s first performance (2014) at the Take Note! Music House, he has released both “A Week in December” and “Sleeper Years”, toured internationally, produced critically acclaimed and award-winning albums for artists like Kat McLevey and Melanie O’Brien, and has toured with his second short film, “Keystone”, which was called one of the top ten short films of the year by the Calgary International Film Festival. Ian has been touring since 2007, across Canada, the U.S., Germany, The Netherlands, Austria and Italy, and has had his music played on radio and television internationally. He has performed his music for audiences of all ages, from school workshops to seniors’ homes, festivals in Canada, U.S., and Italy, to soft-seat theatres, churches, pubs and house concerts – the constant has been connection with the audience. Much like our Take Note! Music House host, Ian continues to wear many musical hats, including touring songwriter, music producer, film director, writer, and composer. All of these different facets come together in his songwriting and performances, and we’re so happy to have him return to the TNMH. “Foster had a true knack for fully engaging the crowd with his genuine and light-hearted banter… a hit both with the audience, and certainly with us.” YouTube: https://www.youtube.com/channel/UCZDdLG0HU21dnk215ipoz9w Facebook: https://www.facebook.com/ianfostermusic/ "Old Christmas Day”:  https://youtu.be/zsSMSYkro-g “A Week in December”: https://youtu.be/6De3swwV5OQ