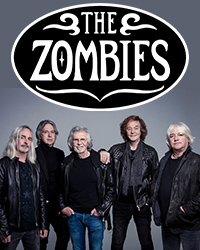 Tickets starting at $69; prices do not include GST, handling charges, and fees.

Iconic British psychedelic pop legends The Zombies have returned to celebrate their long-awaited Induction into The Rock & Roll Hall of Fame. After receiving their 4th nomination in 5 years, the support for The Zombies’ induction among the public and their peers was undeniable.

The band’s live performances, described by Rolling Stone as “absolutely triumphant”, take fans on a journey through time, from their early hits…their 1968 masterpiece Odessey & Oracle…post-Zombies solo favorites…right to today with Still Got That Hunger.