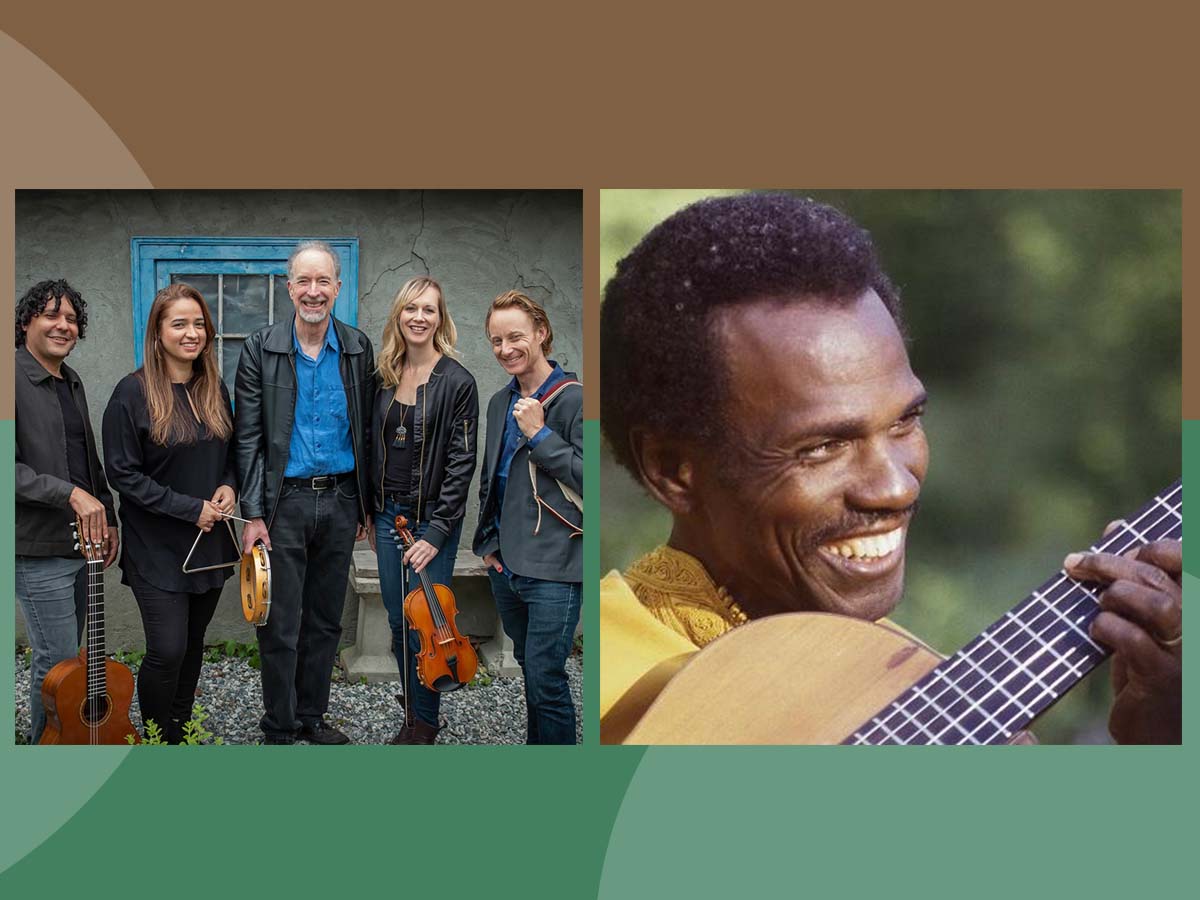 The Rogue’s ‘Brazilian Experience’ for our Heritage Series concerts features locals Forró Do Cana along with multiple JUNO nominee Celso Machado. These phenomenal musicians are similar because of their love and dedication of sharing the richness and diversity of Brazilian music to their audience and beyond. Think good vibes, killer rhythms and catchy songs!

Vancouver’s premier Brazilian Forro band, Forró do Cana, was founded in 2018 as a passion project, dedicated to the dissemination of the music of Northeastern Brasil. The music of Forró do Cana blends the sounds of Serena Eades (violin and the Brazilian fiddle, rabeca) and Steve Charles (accordion) with the Brazilian roots of Mario Silva (guitar) and Sara Magal (percussion and vocals).  Their incredible percussionist Liam MacDonald is one of Vancouver’s top go-to players of Brazilian music.

For those not familiar with Forró, this is a partner dance with a variety of rhythms and accompanying steps from very intricate and showy to subtle and sensual.  A whole family of related rhythms are referred to under the umbrella term Forró: Baião, Forró, Xaxado, Xote and Arrasta pé.  Arrasta pé (“drag your foot“) received its name due to the peculiar dancing movement: the soles of the feet drag over the floor with each dance step. Forró is a lively, accentuated Baião. And as you will have noticed, not only the name of the genre, but a specific rhythm within the genre, as well as the name of the festivity at which its music is played and danced (“Let’s go to the Forró!). Both the rhythms of Baião and Forró formed the guideline for the emergence of the Lambada. Xote is a slower rhythm with a very special swing, inspired by Polka and Mazurka.

While formed as an ensemble that focussed on the traditional Brazilian dance music of Forro, the band quickly realized there was a desire to hear other styles, namely the Northeastern Carnaval music known as Frevo which consists of very fast joyful and almost frenetic ska-like rhythms and melodies, naturally accompanied by equally joyful and frenetic, jumpy dancing often with small colourful umbrellas and costumes.  And to stimulate the more complex melodic and rhythmic listener’s ears, the band plays a healthy dose of beautiful Brazilian melodic Chorinho.

What’s with the band name? Forró do Cana is a play on words: Cana meaning sugar cane in Portuguese, which is used to make Caldo de Cana (sugarcane juice), Cachaça (sugarcane liquor), as well as an abbreviation of Canada.

Virtuoso Brazilian guitarist, percussionist, multi-instrumentalist and composer, Celso Machado, transports his audiences through the richness and diversity of Brazilian music and beyond. For forty years Celso Machado has been performing on concert stages throughout Brazil, Western Europe, Scandinavia, Canada, and the United States. Considered one of the most versatile and exciting musician/composers of Brazilian music today; his guitar technique is but one of his passions; his gift for making music out of anything and everything around us is his mission in life.

In addition to Celso’s solo career he has shared the stages with some of the world’s great guitarists: Sergio and Odair Assad, Badi Assad, Romero Lubambo, Yamandu Costa, Cristina Azuma, Peter Finger, and Solorazaf.  He has opened for Gilberto Gil, Bebel Gilberto, Hermeto Pascaul, and  Al di Meola; amongst other great musicians.

Brazilian music has arisen out of various blends of Classical European, African, Portuguese and Indigenous influences. There is less division in Brazilian music between classical and jazz, jazz and folk.  While Celso’s music is rooted in Brazilian rhythmic and melodic styles, it also reflects his incurable fascination with other world music traditions. He finds similarities between the music of southern Italy and northeast Brazil, the Egyptian Maqsoum and the Brazilian Baião  rhythm, the Moroccan Gnawa rhythm  and Afoxé and Samba. Celso incorporates these influences into his own sound; his own unique contribution to the ongoing evolution of Brazilian music.

Drawing on his thorough study of classical guitar, Celso composes for guitar and ensemble.  His remarkably innovative compositions are infused with a rich knowledge of the traditional music of Brazil: samba, chôro, baião, frêvo etc.  His compositions are published by Editions Henry Lemoine in Paris and are performed and recorded by both students and professionals around the World, from solo performances to guitar orchestras.  Many of his scores have been adapted for other instruments like piano, violin, cello, clarinet, pan pipes, harp and more.

This concert is funded generously by Canadian Heritage.