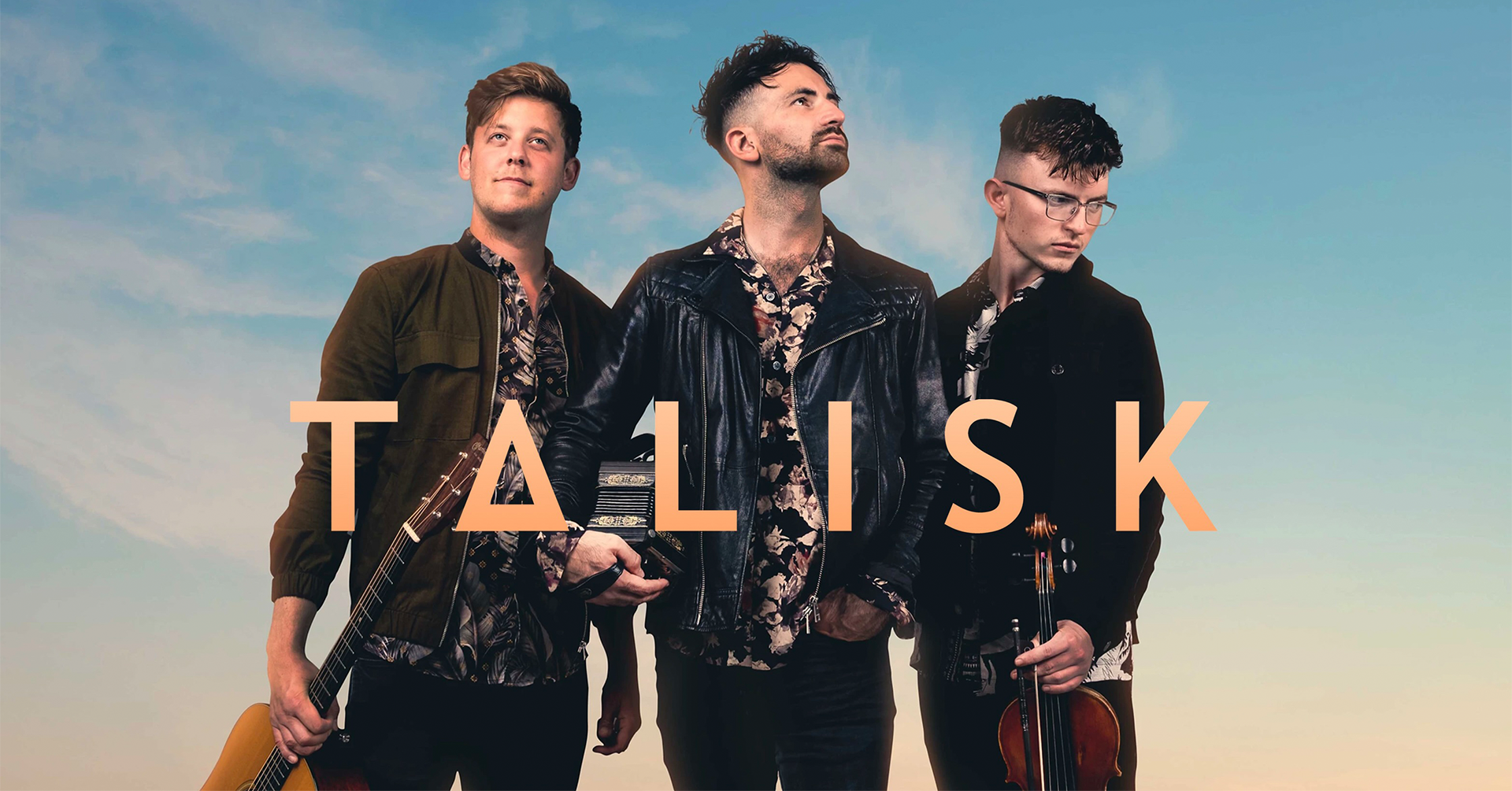 Ground-breaking, chart-topping, genre-bending, globetrotting, instantly enthralling… it’s little wonder that Talisk rank highly amongst the most in-demand folk-based groups to emerge from Scotland in the last decade and more.

Mohsen Amini (BBC Radio 2 Folk Awards’ Musician of the Year), Graeme Armstrong and Benedict Morris (BBC Radio Scotland Young Traditional Musician of the Year) fuse concertina, guitar and fiddle to produce a ground-breaking, multi-layered signature that has captivated audiences around the globe. At its core, three seemingly acoustic instruments – but in the hands of three master craftsmen; one unmistakable, bold sound and captivating live show.

Following their critically acclaimed debut, Abyss, Talisk’s sophomore album, Beyond, quickly amassed five star reviews and rose to No.1 in the iTunes world music charts upon its late 2018 release. With streaming figures into multiple millions, there’s new music on the horizon in 2022. Audiences worldwide have welcomed the release of Dawn, the latest chapter from a group lauded by leading world music magazine Songlines as: “incredibly infectious and endearing… fresh, invigorating, accomplished.”

BBC Radio 2 ‘Musician of the Year’ Mohsen Amini from Glasgow, Scotland is a fast growing name in the traditional world. Boasted by the Herald as a “Virtuoso” and by BBC Scotland as a “Force of Nature” he’s a leading voice on the music scene today.

In 2014 he co-founded Talisk, who after only two months of formation won a Danny Kyle award at Celtic Connections and shortly after won a BBC Radio 2 Folk Award. Their debut album Abyss was shortlisted at the 2016 MG Alba Trad Awards as Album of the Year, the same awards where they were crowned Folk Band Of The Year in 2017!

Mohsen also founded acclaimed supergroup Ímar at the start of 2016. They, in the space of two years managed to go viral with videos excessing 1 million views. This provided a great platform to launch their award nominated album Afterlight ( ***** Irish Post) and even managed to have them nominated as “Live Act of the Year” which was shortly followed by them being awarded the 2018 Horizon Award at the BBC Radio 2 Folk Awards.

Growing up around the traditions of the Scottish Borders, Graeme Armstrong started playing the guitar aged 12. Bringing this to a new level he embarked on the prestigious Folk and Traditional Music course at Newcastle University where, through specialising in performance and composition from the Scottish Borders, he achieved a BMUS Honours Degree.

Through his time in Newcastle he co-founded the award winning Rachel Hamer Band. Their debuting album ‘Hard Ground’ was boasted by Folking as “exceptional” and managed to get itself a 4 star review in ‘music republic magazine’.

In his career Graeme has extensively throughout the UK, Europe, Middle East and Australia with bands and musician such as Carly Blain, Black Market Tune, Ideoms theatre company. Joining Talisk in 2017 he brought a new life to the band growing it from strength to strength resulting in them being crowned the 2017 Folk Band Of The Year at the MG Alba Scots Trad Music Awards.

BBC Radio Scotland Young Traditional Musician of the Year 2019, Benedict Morris from Glasgow is a rising star of traditional music. Boasted for his “Virtuosity” by Irish Music Magazine and hailed “Magnificent” by Sharon Mair at BBC Scotland, Benedict is one of the finest fiddle players in the country and is already making a huge impact on the traditional music scene.

Since winning the Young Traditional Musician of the Year he had made numerous TV appearances on TG4, BBC Scotland, BBC Alba, travelled to Tønder Festival – one of Europe’s biggest folk festivals – with supergroup I´mar, played to a sell out audience in Dublin’s 3 Arena and in September 2019, he took the stage for the Last Night of Proms in the Park at Glasgow Green. Accompanied by the BBC Scottish Symphony Orchestra – conducted by Stephen Bell – and with hundreds of thousands watching for home the performance was recognised as the ‘stand-out moment’ of the night by Proms Executive Producer Stephanie McWhinnie.

Coupled with joining multi-award winning bands in Talisk & Dallahan in 2021, Benedict has also released two debut solo singles, ‘In Sight’ and ‘Lune’. Both of which are enveloped in luscious string writing, creating his own signature sound for his forthcoming solo album.