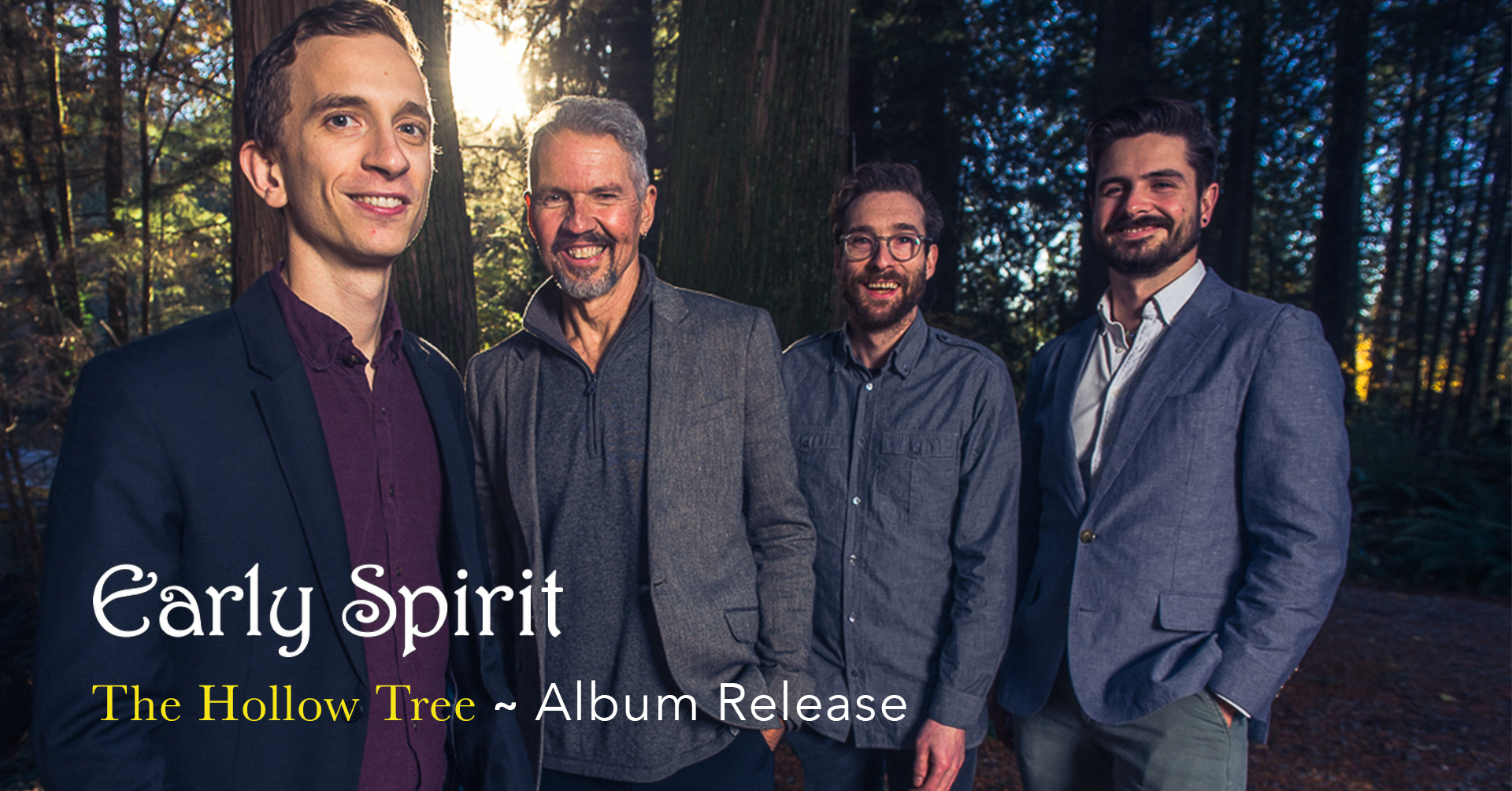 Early Spirit is Gabriel Dubreuil (violin), Ben Kelly (percussion), Aidan Goheen (bass) and Jay Knutson (guitar and vocals). This musical outfit is as intriguing as their diverse musical backgrounds and as captivating and exciting as a live band can be. From the first electrifying chord they will lead you through the musical mosaic of their own unique West Coast “Rockin’ Folkin’ Rollin’ Jazzin’ Celtic Swing-Grass”.

Since the release of their album “Unrelated” (2018), the band has been sought after from coast to coast, and they covered a good chunk of it chasin’ down the Spirit trail, getting folks from Victoria to Inuvik and Winnipeg to Moncton up out of their chairs and dancing. They invite you along to throw convention out the window, let loose and rise up to Early Spirit!

2018 saw the release of Early Spirit’s debut album “Unrelated”, which was produced by Grammy and Juno award winning musician and producer Leonard Podolak (The Dhuks), and featured Natalie MacMaster, Geoffrey Kelly, Leonard Podolak and Michelle Campagne. The record helped place the the band on folk club and festival stages around the Pacific Northwest including Mission Folk Festival, Northwest Folk Life, Salmon Arm Roots & Blues, and the Rogue Folk Club, and across Canada.

Jay Knutson sings the lead vocal for Early Spirit. Previously, he arranged, performed, and wrote Celtic folk-rock music with John Mann and Geoffrey Kelly in their band Spirit of the West. Later, Jay worked with major Canadian artists including Hart-Rouge and Connie Kaldor. His solo material, a constant throughout his career, draws from rock, jazz and roots music. As a singer- songwriter, Jay “puts the soul back into music, fun back into instruments, and conviction back into lyrics” (The Chronicle Herald, Halifax). He uses wisdom gathered from over 50 album projects to write for and perform with Early Spirit. Few performers in folk music can combine their experience with raw energy like Jay.

Ben Kelly is an organic and earthy drummer hailing from Vancouver. Raised on a sturdy diet of music of all kinds as a whipersnapper, he took took to drums at a young age. Working with such artists as Fish & Bird, Carmanah, Alexandria Maillot, and Jenny Ritter, Ben has spent the better part of 12 years recording and touring across Canada, USA, Europe, and the UK. Ben enjoys whiskey and can converse with you about power pop and new wave music until the sun comes up again

Gabriel Dubreuil is a violinist, and composer. A musical chameleon, he feels at home and blends naturally from Celtic, to Jazz to Classical. He is an established violin teacher and is a musical director for Vancouver’s North Shore Celtic Ensemble. He one half of the ‘Loose Root Duo’ with Toronto cellist George Crotty, and a session music having recorded and performed with local and international acts. Gabriel graduated from Berklee College of Music (Boston, USA) in 2016. His solo album ‘Back to Back Bay’ was released in 2016.

Aidan Goheen is a bassist and educator. He enjoys playing in a wide variety of styles stretching from punk to folk to jazz. As a school teacher and lifelong learner, Aidan believes that a curiosity for the world and the arts is the key to a good life. Aidan holds a Bachelors of Music from Capilano University. He is the band leader and founder of ska and funk band ‘Big Madge’.

Early Spirit is an ensemble that spans decades and was created through a unique take on folk music. They invite fans of all ages to remember how much they love music and get dancing!

Singer/songwriter Ben Sures will open the evening. He is a winner of the prestigious songwriting contest – the John Lennon songwriting contest and the International songwriting contest. He has traveled across Canada and the UK performing at festivals, small clubs, fairs, town squares and living rooms. He is well known for his work on CBC Radio as part of ‘The Irrelevant Show’ as well as the many interviews and broadcasts on Canada Live, The Round Up, Morningside, Madly Off in all Directions, The Vinyl Café and more.

Ben isn’t the only member of his family to work in the arts. His grandfather drew cartoons for the New Yorker and designed posters for the movies; he was rumoured to have designed and built the fruity hats of Carmen Miranda. His mother is a painter, while his classical guitar playing father was a recipient of The Governor General’s Award as well as the Order of Canada for his work in ceramics, receiving the honor in the same year as Leonard Cohen.

Ben’s brand new album ‘The Story That Lived Here’ is a wonderful collection of singer-songwriter instant classics. His first children’s story was recently published by the Manitoba First Nations Education resource, the story is based on his song ‘The Boy Who Walked Backwards’. Fans have said that Ben has the rare gift of connecting with audiences on multiple levels, he is a great performer, songwriter and is also very funny.