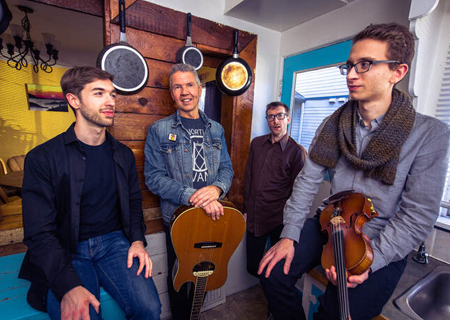 The Early Spirit Trio is as intriguing as their diverse musical backgrounds and as captivating and exciting as a live band can be. From the first electrifying chord they will lead you through the musical mosaic of their own unique West Coast “Rockin’ Folkin’ Rollin’ Jazzin’ Celtic Swing-Grass”. After the release of their debut album “Unrelated“, this band was sought after from coast to coast, and they covered a good chunk of it chasin’ down the Spirit trail, getting folks from Victoria to Inuvik and Winnipeg to Moncton up out of their chairs and dancing.They invite you along to throw convention out the window, let loose and howl. Rise up to Early Spirit!

The Early Spirit Trio is Gabriel Dubreuil (violin), Ben Kelly (percussion), and Jay Knutson (guitar). The first album came out just a short couple of years ago, but they have a new one in the works, and will be performing material from it at this concert.

Jay Knutson sings the lead vocal for Early Spirit. Previously, he arranged, performed, and wrote Celtic folk-rock music with John Mann and Geoffrey Kelly in their band Spirit of the West. Later, Jay worked with major Canadian artists including Hart-Rouge and Connie Kaldor. His solo material, a constant throughout his career, draws from jazz and roots music. He uses wisdom gathered from over 50 album projects to write for and perform with Early Spirit.

Gabriel Dubreuil is a young Franco-Canadian fiddler who attended Berklee College of Music in Boston. He had already worked around North America as a young, in-demand session violinist before spearheading the trio in Vancouver. Gabriel honoured his passion for independent, genre-bending music, and started his own teaching practice and performing act; his talents span classical, folk, and jazz.

Playing drums in this group is Ben Kelly, the son of Jay’s Spirit of the West bandmate, Geoffrey Kelly. Ben has performed and recorded with Fish & Bird, an eclectic folk music band from the Southern Gulf Islands

The Early Spirit Trio is an ensemble that spans decades and was created through a unique take on folk music. They invite fans of all ages to remember how much they love music and get dancing!

“After catching Early Spirit at the 2018 Mission Folk Festival I immediately hired the group for the 2019 Salmon Arm Roots and Blues Festival. This is one inspired quartet that delivers superb standalone concerts and one that can help take the process of collaboration and spontaneous interplay to a most memorable level in workshops and side stage settings. Exceptional instrumentalists, fine singers armed with a deep songbook that draws on all sorts of influences, makes Early Spirit is a festival programmers dream.”- Peter North, Artistic Director, Salmon Arm Roots and Blues Festival.