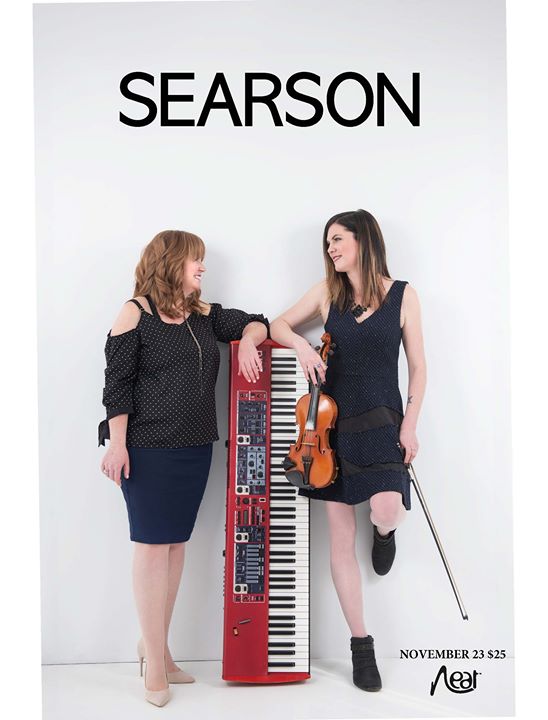 The retun of Searson live on the intimate stage at Neat Coffee Shop November 23rd!! This is a phenomenal show not to be missed! The high energy of Searson is sure to please all!! Entertainment for the whole family, come join us in this experience!!
Check them out!

For over a decade now, Searson has toured the world with their unique blend of high energy fiddling, passionate vocals and intricate step dancing. At the core of Searson, are Colleen and Erin Searson, two sisters who hail from the Ottawa Valley, Ontario, Canada. Their spirited live shows feature Colleen on fiddle and Erin on piano & tenor guitar, interspersed with the incomparably rich sounds of sibling vocal harmonies, and both sisters “pounding the boards” with Ottawa Valley step dancing. Searson tours as a trio and their talents are complimented by alternating multi-instrumentalists that include acoustic & electric guitars, bass, mandolin and percussion. This talented trio performs sets that feature their original style of “Canadian Celtic Pop”, which includes a mix of traditional and original instrumental and vocal selections.

Colleen and Erin have been immersed in the Ottawa Valley music tradition their entire lives. Erin trained classically through the Royal Conservatory of music in piano beginning at age 4. Colleen has been studying violin and fiddle methods from many styles around the world since age 9, and both sisters began step dance lessons before their 9th birthdays. They began performing locally and competing at step dance and fiddle contests throughout Ontario as children, which gave them the invaluable experience they needed to become accomplished performers and musicians. While the girls were in High School they performed across Ontario and Quebec at various events which garnered them the opportunity to gradually begin touring at a variety of events across Canada, the United States and Europe. A love of incorporating the Ottawa Valley style music with Celtic, East Coast, Scottish and various other genres caused them to expand their musical horizons, and the result is a sound all their own, which includes poignant compositions by both women. “The most satisfying part of performing live is seeing our fans singing along to songs that we’ve written and requesting fiddle tunes that we wrote,” Erin says, and Colleen chimes in, “absolutely, there’s nothing better than seeing the audience emotionally involved in your live show.”

Like their live shows, Searson’s recordings reflect their eclectic tastes, while maintaining strong roots in the tradition they grew up in. In 2017 they released, Homegrown, to honour their Canadian heritage and to celebrate Canada’s 150 years since Confederation by featuring songs by Canadian artists, songwriters (Bryan Adams, Neil Young, Chantal Kreviazuk, Robbie Robertson), and instrumentalists (Natalie MacMaster, Denis Lanctot) who have influenced Searson in meaningful ways.

This year, Searson will release their milestone tenth full length album, as well as their first live performance DVD. Both recordings document their performance in front of a live Ottawa Valley audience at the historical Neat Coffee Shop in Burnstown, Ontario. There is little overlap in musical selections between the full length audio CD and 60 minute live performance DVD from this celebration concert, and the DVD also includes “behind the scenes” clips and interviews with the band.

In May 2015, Searson filmed a brand new national series for CBC called ‘Still Standing’. Concurrently, they ran a successful crowdfunding campaign in support of their 2015 album Stars Above the Farm. They’ve hosted three bus tours in Ireland with their Kansas City friends, The Elders. They continue to tour across Canada, the United States, Germany, Denmark, Switzerland, Portugal, and Spain. Wherever they travel and whatever projects they undertake, their passion for their music and their roots shines through and connects with audiences in a memorable way.