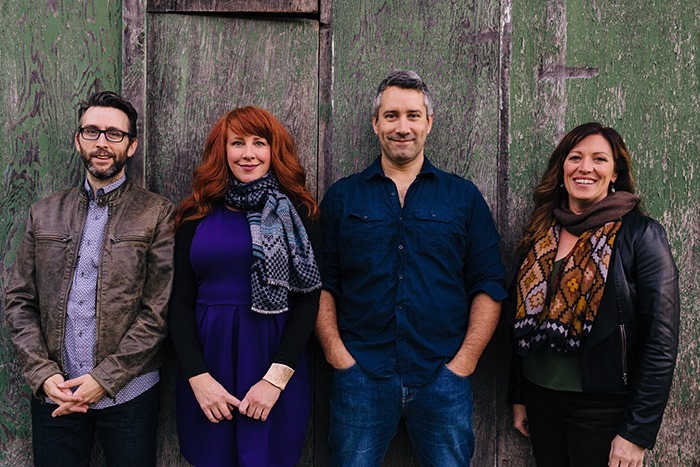 It’s always a treat when these musicians get together on the same stage. They are among Cape Breton‘s most respected musicians and they are teaming up again for a rare performance together at The Rogue. Last year’s sold out performance was a highly memorable evening, so please don’t delay and miss out this time around!

Since getting their start at a late night session during Celtic Colours in 1998, Beòlach has established itself as one of Cape Breton’s most exciting and innovative traditional bands. Performing a lively mix of Cape Breton, Scottish and Irish tunes, the group features Mairi Rankin (fiddle, step-dance), Wendy MacIsaac (fiddle, piano, step-dance), Mac Morin (piano, accordion, step-dance) and Matt MacIsaac (Highland pipes, whistles, guitar and banjo). On stage and in their recordings, Beòlach presents original compositions as well as unique, dynamic arrangements of classic traditional tunes.

The band has thrilled audiences at festivals around the world with their energetic performances, witty presentation, and their versatility as dancers and instructors. Each of the players in Beòlach is an experienced performer in his/her own right, having played for dances and concerts around Cape Breton and beyond long before they got together as a group. They have in total released half a dozen solo albums and have made individual guest appearances on countless other albums. Beòlach’s two group recordings, Beòlach (2001) and Variations (2004), were both nominated for East Coast Music Awards and in 2005 the band was nominated for the Canadian Folk Music Award for Best Instrumental Artist. As representatives of the Cape Breton culture and masters of their craft, this group will vow to make it a lively night of music, complete with infectious rhythms and honest humour that people have come to love from the East Coast.

These artists rarely get a chance to play together in front of an audience, thanks to Mairi now living on the west coast and touring with her amazing band The Outside Track, Mac and Matt touring with Natalie MacMaster‘s band and Wendy touring with Mary Jane Lamond and her own music. So, they love it when dates align and a night like this is possible. After touring extensively throughout North America, the U.K. and Europe for 11 years with Beòlach, they have loads of great arrangements with tunes that are favourites to the four accomplished Cape Breton ambassadors.

Wendy MacIsaac is a renowned fiddler from Cape Breton who has been playing music for more than 30 years. She is recognized as one of the “old school” style of players who has kept the traditional sound going and has a deep respect for it. Wendy is also a sought after piano accompanist and step dancer. Besides performing as a solo artist, Wendy records and tours in a critically acclaimed and award-winning band with Mary Jane Lamond and Cathy Porter. She is a founding member of Beólach, and has also performed with The Cape Breton Summertime Revue, Capercaillie, The Chieftains, Ashley MacIsaac, and toured with Heather Rankin and The Rankin Sisters. Wendy has recorded on more than 20 albums (including four of her own, two with Beólach, and one with her and Mary Jane), and is in high demand for her skills at teaching the Cape Breton style of fiddling.

Mairi Rankin is a fiddler and step dancer who has been influenced by some of the best Cape Breton traditional musicians and instructors on the island. She has developed her own unique style by being immersed in such a rich musical culture. Mairi has been fortunate to tour nationally and internationally as a performer and educator in both fiddle and step dance. She has performed as a solo artist, a side musician, and as a member of Beòlach and the Scottish/Irish/Canadian band The Outside Track. Mairi has recorded one solo album, two each with Beòlach and The Outside Track and been featured on numerous compilations and recordings.

Mac Morin is a dancer and piano player from Troy, Cape Breton. Starting out as a talented dancer, Mac became interested in piano as a teenager. He has gone on to tour around the world with Natalie MacMaster and Beòlach while continuing to travel widely to teach Cape Breton step dancing. Mac has appeared on numerous artists’ recordings including Natalie MacMaster, Yo Yo Ma, The Rankins, Buddy MacMaster, Troy MacGillivray and released his own solo album in 2003.

Matt MacIsaac was born in Cape Breton and started playing whistle and pipes when he was 10. At 18 he won the Argyllshire Gathering Silver Medal in Oban, Scotland, and at 19 started recording, playing and touring the US with Cuillin – a celtic rock / fusion group. At 21, Matt joined Natalie MacMaster’s band and played with her for the better part of 8 years, on pipes, whistles, banjo, percussion and guitar. He appears on several of her recordings. When he was 25 he recorded and released the critically acclaimed “Piping Album”, a stripped-bare solo recording of his main instrument. Matt continues to play principally in Natalie’s band.

As we’re fond of saying, if you’re a fan of this kind of music (and who isn’t really?) you’d have to be daft to pass up this opportunity!