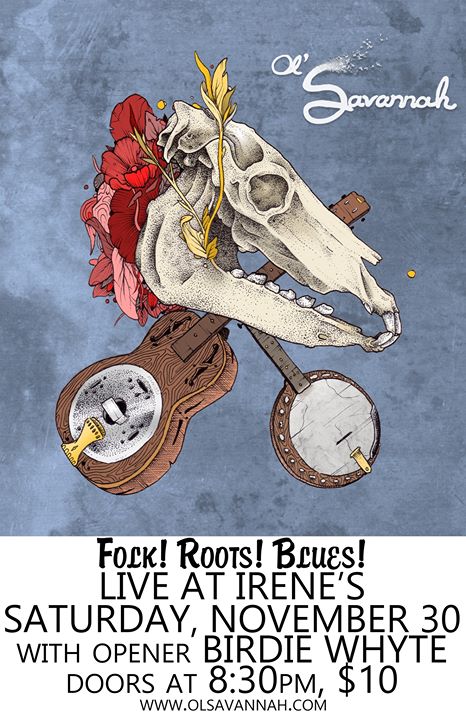 Ol’ Savannah are a Montreal-based folk/roots band founded by Speedy Johnson and Bartleby J. Budde. The two began writing songs together in 2009, highly influenced by blues artists, such as Mississippi Fed McDowell and John Hurt. Ol’ Savannah have released five full-length albums and an EP: Ol’ Savannah (2011), Underneath the Old Red Barn (2012), Death on the Mountain (2013), Burden (2017), Hobo EP (2018), and Fill My Cup at De Melkbus: Live in Dordrecht, Netherlands (2018).

Ol’ Savannah’s style has been compared to a mix of Tom Waits, Roscoe Holcomb, Muddy Waters, and The Pogues.

Ol’ Savannah have made multiple appearances on Halifax, Nova Scotia’s waterfront as part of the Halifax International Busker Festival (2010 & 2011). In Quebec, the group participated in Festival Fringe in Montreal and Chicoutimi in 2012, and they played Festival International de Folk Sale in June of 2013 in Ste-Rose-du-Nord. In June 2015, the band performed at the Montreal Folk Festival on the Canal. And, in May 2016, the group played Paddlefest in St-Andrews, New Brunswick.

In October 2017, Ol’ Savannah accepted an invitation to perform at Festival Le Grand Soufflet in Brittany, France, and followed that with a six-week tour in western Europe, which took the group to Belgium, Holland, Germany, Switzerland, and Italy, as well as France.

From 2013-2017 and in 2019, Cult MTL readers voted Ol’ Savannah into the “Best Country/Folk Act” category in the annual “Best of Montreal” survey. In 2018, the Ol’ Savannah Hobo EP was nominated for Folk EP of the Year by GAMIQ, the independent music awards in Quebec, Canada.