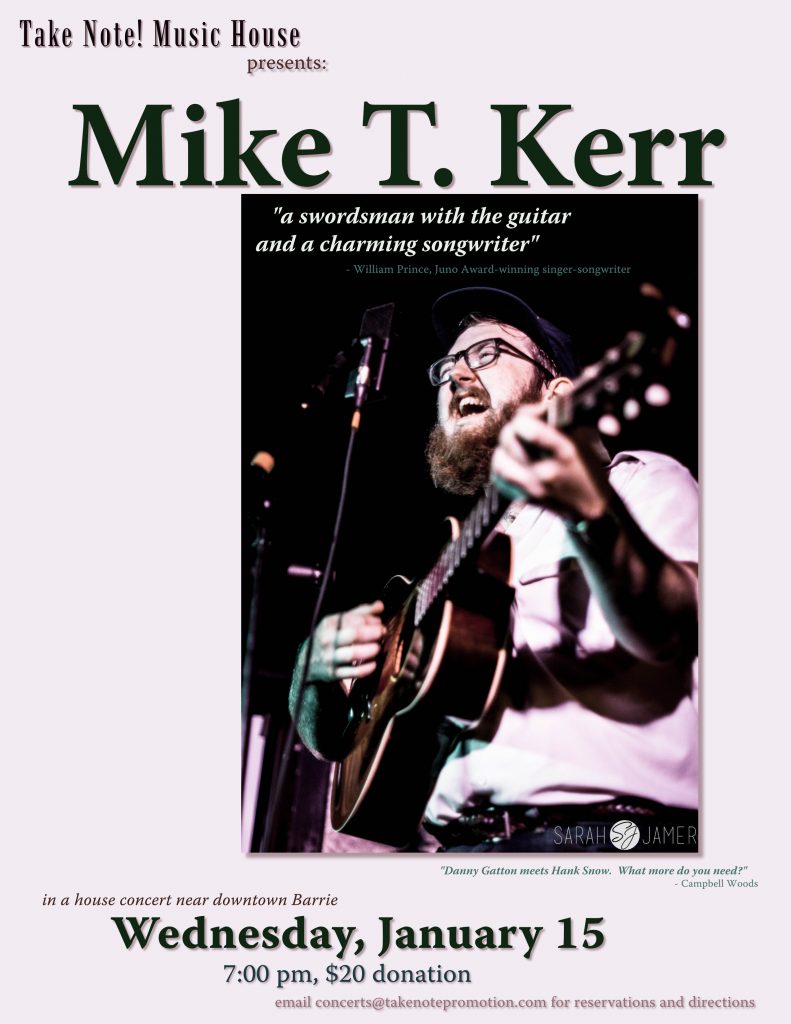 The Take Note! Music House presents wild flatpicker and classic country songwriter Mike T Kerr on Wednesday, January 15 at 7:00 pm (doors open at 6:30). Requested donation is $20, with all proceeds going directly to the artist. You may reserve your seat by emailing concerts@takenotepromotion.com or calling 705-305-1687 (yes, the phone is working again – it’s a Christmas miracle!). The address is given upon reservation – downtown Barrie, near the courthouse.

“Classic and simple and full of melancholy delivered with a grin. Danny Gatton meets Hank Snow. What more do you need?” [Campbell Woods]

“A swordsman with the guitar and a charming songwriter.” [William Prince, Juno Award-winning singer-songwriter]

Mike T. Kerr is a wild flatpicker and ambitious country songwriter of Canadian heritage and American citizenship. During his time at Berklee College of Music in Boston and in over 10 years of performing, he’s lived his life through many historical and contemporary musical styles. Always curious to dig up not only a song’s history, but the shape of the world at the time, Mike plays passionately and openly while interpreting the great guitar players of the past. A Danny Gatton lick or Django Reinhardt tune is never far from his fingertips.

“Mike is an incredibly engaging performer – present with the audience and entertaining as hell! He is truly a master guitar player – whether solo or in a band context, his playing is astonishing.” [Matthew Smith, Managing Director, Club Passim (Cambridge, MA)]

Born in Michigan and raised in Ontario, Quebec and Virginia, it’s hard to pinpoint exactly where Mike is from. He now hangs his hat in Toronto after being on the road since 2016.

Mike had a brief but boisterous stint based out of Halifax, Nova Scotia. There he fronted The Franklin Brewery Boys, a bluegrass and hot swing ensemble nominated as Halifax’s “Best Country Band” in The Coast in 2017. He has appeared on award winning albums by Nova Scotia’s Ryan Cook, Thomas Stajcer, and Willie Stratton. Mike has performed at such NS festivals as Deep Roots Music Festival, Full Circle, Folk Harbour Festival, and In the Dead of Winter. In 2018 Mike was nominated by Music Nova Scotia as “Musician of the Year”.

Currently residing and gigging in Toronto, at venues such as The Cameron House, The Dakota Tavern, and The Local Pub, he can be found playing original country music almost any night of the week, or lending his guitar skills to Canadian folk singers such as Corin Raymond, Campbell Woods, and more. Around Ontario Mike has toured with William Prince, Irish Mythen, and most recently, Bill Poss.

The Country Casanovas, featuring Mike and some of Toronto’s brightest young country stars, play The Cameron House on Queen St West on the first Saturday of every month at 10pm.

“I love the timelessness of Mike’s tunes. You feel like you are listening to a classic country hit when country was at its finest. Simultaneously heartbreaking and heartwarming!” [Dana Sipos]