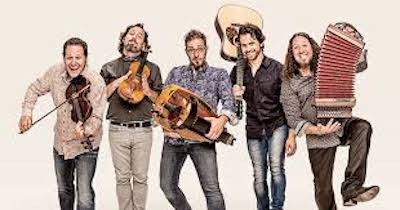 The award­winning and highly acclaimed band Le Vent du Nord is a leading force in Quebec’s progressive francophone folk movement. The group’s vast repertoire draws from both traditional sources and original compositions, while enhancing its hard­driving soulful music (rooted in the Celtic diaspora) with a broad range of global influences. Featuring button accordion, guitar and fiddle, the band’s sound is defined by the hurdy­gurdy, which adds an earthy, rough­hewn flavor to even the most buoyant dance tunes.” — Boston Herald
Since its inception in August 2002, Le Vent du Nord has enjoyed meteoric success, performing well over 2,000 concerts over 4 continents and racking up several prestigious awards, including a Grand Prix du Disque Charles Cros, two Junos (Canada’s Grammys), a Félix at ADISQ, a Canadian Folk Music Award, and “Artist of the Year” at Folk Alliance Annual Gala.
Tickets $10 from eventbrite: https://tinyurl.com/NordConcert. Link will be sent a few days before concert. Additional donations are welcome.