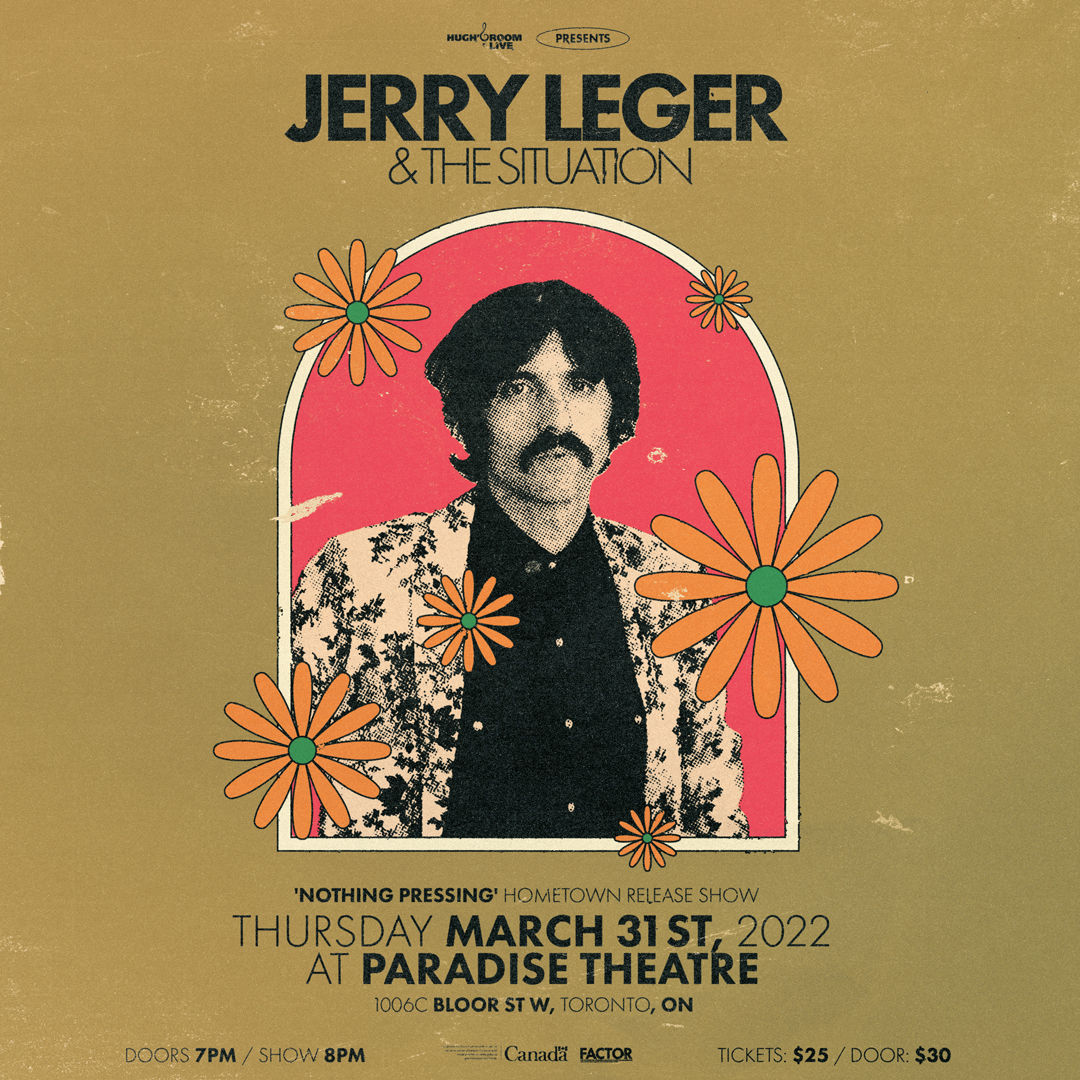 Hugh’s Room Live presents, “Jerry Leger & The Situation’ at Paradise in Toronto, celebrating the release of the new album, ‘Nothing Pressing’.
Opening set by the Alan Zemaitis Organ Trio.
Doors 7pm / Show 8pm
ABOUT JERRY LEGER:
“Jerry Leger has that spark in him that all the great songwriters have. He’s the real deal.” – Ron Sexsmith
“Great songs, great voice…right in my wheelhouse.” – Tommy Stinson (The Replacements)
“Take the time to listen to Jerry Leger!” – Doug Paisley
“One of Canada’s best.” – Exclaim!
“From the top drawer.” – UNCUT
“One of the best Canadian songwriters.” – Rolling Stone Germany

Jerry Leger follows up his critically acclaimed studio album ‘Time Out For Tomorrow’ with ‘Nothing Pressing’; produced by Michael Timmins (Cowboy Junkies). Jerry’s last self released album ‘Songs from the Apartment’ was a stripped-down lo-fi affair recorded in Leger’s home using a cheap recorder with an internal microphone. This lead to two songs from ‘Nothing Pressing’, “Underground Blues” and “Sinking In,” to be also recorded in Leger’s home using an old 80s Tascam 4-track tape recorder. The remaining nine tracks included on ‘Nothing Pressing’ present Leger’s work in two starkly contrasting soundscapes. “Nothing Pressing,” “Protector,” and “Still Patience,” are solo acoustic recordings cut live in the studio with little embellishment. The other six tracks are prime roots rock and roll featuring his long-time band The Situation. Among the latter songs, “Kill It With Kindness” and “Have You Ever Been Happy?” have the kind of drive, energy and spirit that are sure to make them highlights of his future live shows.
Leger often times finds himself at a loss as to explain the source of his songs. He feels his songwriting, while clearly drawing on experiences filtered through a panoply of influences, often verges on being a supernatural experience. Over the course of the eleven songs on ‘Nothing Pressing’, the songwriter’s songwriter engages with questions of existence, mortality, hope, trust and heartbreak while simultaneously conjuring feelings of isolation, reflection, longing and gratitude. Paired with such evocative lyrics are wonderfully crafted melodies, soulful vocals and the spirit and energy of a mature songwriter, comfortable in his skin and growing as an artist with every release. ‘Nothing Pressing’ serves a wonderfully refreshing tonic in troubling times.