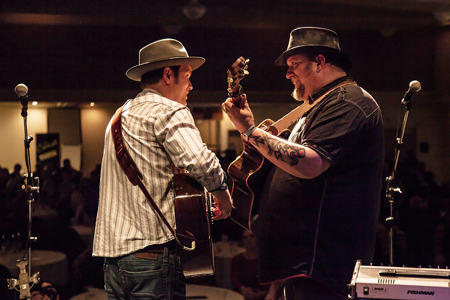 Gunning & Cormier go back 23 years when Dave had a fiddle player drop out of a show at the last minute. “He hired me for a gig when I was just back from Nashville, nobody knew me here,” says Cormier.

“We were totally blown away by J.P.’s playing,” recalls Gunning. “I remember him saying if you ever do a CD, I want to play on it.” That happened, and much more. They played together and wrote together whenever they could, coming up with songs that graced both their projects, over the years showered with awards and nominations on the East Coast and nationally.

“Dave is such a part of my life,” says Cormier. “Dave is like my family, he’s like a blood relative to me, and he’s always been that way. ” Gunning feels the same way. “Absolutely, we just became fast friends, and we’ve been working together ever since.”

Along with richly-deserved peer respect, Dave Gunning has earned a shelf full of music industry honours. That tally currently stands at 8 East Coast Music Awards and 2 Canadian Folk Music Awards, plus a 2012 Juno Award nomination for Roots & Traditional Solo Album of the Year.

JP Cormier has recorded 17 albums, winning 13 ECMAs, 2 Juno nominations, a Canadian Folk Music Award and 5 Music Nova Scotia Awards. Each album is a snapshot of another aspect of his brilliance. There are fiddle, mandolin, banjo and guitar albums, tribute records, songwriting collections, a purely astounding spectrum of talent and musical vision.

Two songwriters, interpreters, guitar players, and singers at their peak. It’s the power of the song, the highest quality from the past to the now. It’s two friends, brothers, and uncompromising performers.

Now, in a special streaming YouTube concert just for Rogue Folk Club devotees, we bring you these Maritime icons – just the two of them on stage, swapping songs and telling stories in the way that only they can do.