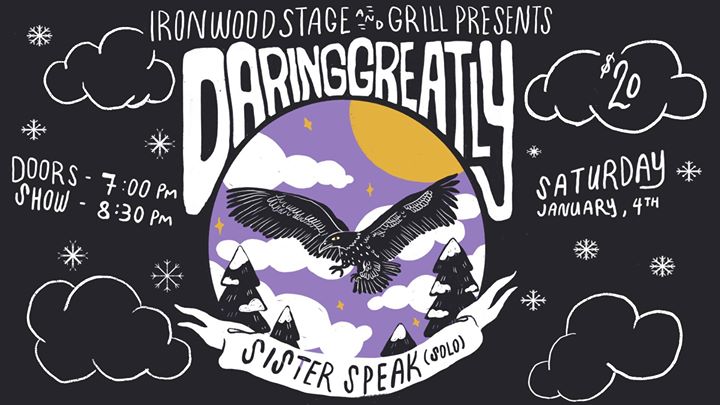 Show price is $20, and will be added to your bill at the end of your evening.

Daring Greatly, an independent, self-managed Heartland Rock & Soul band, known for its mesmerizing “blood harmonies,” is comprised of a father and his two sons, and 2 best friends who formed in Calgary, Canada in 2015. This tight-knit group is influenced by the spiritual and soul-lifting sounds of 60’s and 70’s Rock music, combining simple lyrical and universal messages of truth, love, purpose, and connection—evident through their 2 albums, ‘Cornerstones’ (2016) and ‘Works of Art’ (2017). Their music has captivated audiences of all ages, across borders and boundaries, offering a plethora of stunningly soul-full original songs, as well as a broad repertoire of cover songs for a widely-entertaining, lively, and memorable performance.

“Give Myself to the World,” Daring Greatly’s first single from their third-coming album by the same name, is an anthemic original work showcasing not only their powerful harmonies and compelling instrumental synergies, but their own personal commitment to serve a purpose greater than ourselves, and inspire our audiences to reach their energetic highest.

“Give Myself to the World” is now available on Spotify, Apple Music / iTunes, Deezer, and CD Baby and more!! Listen here: http://bit.ly/GMTTW-1

Sister Speak Music is on a world tour in support of sophomore record, ‘The Stand EP.’ The tour makes stops in Canada, USA, Germany, France, Central America and more. Sister Speak has headlined legendary music clubs, played at various festivals in North America and shared the stage with Air Supply, Chris Isaak, Doobie Brothers and Xavier Rudd among others. The live show combines passionate Indie-Folk, Americana-Blues, and touch of world music! Sister Speak’s startling debut album, Rise Up For Love, was released in 2014. Since then, the album has aired on radio throughout North America and Europe and Sister Speak has performed over 150 concerts per year worldwide. Whether solo or as a band, Sister Speak aims to share message-driven music and support the authentic expression of the woman’s voice. Sister Speak is currently based in Los Angeles CA.